Will and Guy are convinced that humour, laughter and jokes have been
with us since the beginning of human life on earth, and we would like to
share some jokes with you that have an historical background.

Aristotle felt that laughter was a distinctive trait of humanity and
one that distinguished humans from the animals.

Harty Tarty
Did you know that the eighth Duke of Devonshire, known to his friends
as "Harty Tarty", was told off by Queen Victoria for picking his nose at
dinner.  A poor shot, he once killed a pheasant and his gun-dog, and wounded
two bystanders [one of whom was his chef] with a single cartridge.

Cunning Balduf
Baldulf, the medieval soothsayer, prophesied to the king that his
favourite mistress would soon die.  Sure enough, the woman died a short
time later. The king was outraged at the soothsayer, certain that his
prophecy had brought about the woman's death.  He summoned Baldulf and
commanded him, 'Tell me when you will die!'

Baldulf realized that the king was planning to execute him
straightaway, no matter what answer he gave.  'I do not know when I will
die,' he cleverly answered finally.  'I only know that whenever I do die,
you will die two days later.'

A bus load of tourists arrives at Runnymede*. They gather around the
Robin, the guide, who explains, 'This is the spot where the Barons forced
King John to sign the Magna Carta.'

A fellow at the front of the group asks, 'When did that happen?'

The man looks at his watch and says,
'Gee, hey everybody - we just missed it by a half hour.'

Footnote:
*The Runneymede meadows are on the banks of the river Thames, in the
county of Berkshire, England. Fortunately, the land is now owned and
preserved by the National Trust.

Another True Story of
an American Tourist

Mary Pembarthy, a guide
at Windsor Castle, told Will and Guy this allegedly true story about what
she heard last month when 'on duty'.

Mary was struggling to make herself
heard over the roar of low flying aircraft coming into land at nearby London
Heathrow Airport, one of the busiest in the world.

She was interrupted by
an elderly American tourist who demanded what was wrong with the town
planners, and why had they built the Royal Castle so close to the airport.

The Ministry Of Mirth - A
Government Agency 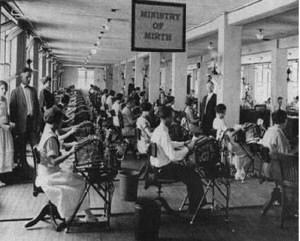 You may be further amused to learn that in 1953 Australia created
Ministry of Mirth as part of their government structure. Their role was to
find humour in the changes brought about by government and present that
information to the public in an amusing and acceptable way.

We have managed to find an old photo of the Ministry of Mirth at work.  Don't they look happy?

Robert Devonshire, a middle aged Londoner from Hackney, was faced with
a difficult decision when choosing between two lovely ladies, Anna and
Mary, both willing to join him in matrimony.

Although not particularly a religious man, Robert Devonshire found his
way into St Martin's church and, kneeling down to pray, he asked God for
advice on whether he should have Anna or Maria for his wife.

When Mr Devonshire got up he was most pleased to see that the Almighty
had put the answer right before his eyes: 'Ave Maria.'

He left the church a delighted man. 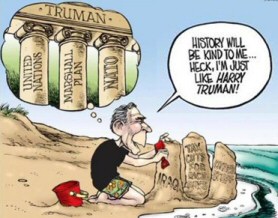 In an American history discussion
group, Professor Langer was trying to explain how society's ideal of
beauty changes with time. 'For example, he said, 'take the 1921 Miss
America. She stood five-feet, one-inch tall, weighed 108 pounds and had
measurements of 30-25-32. How do you think she'd do in today's version of
the contest?'

The class fell silent for a moment.
Then Freddie
piped up, 'Not very well.'
'Why is that?' asked Professor Langer.
'For one thing,' Freddie added, 'She'd be way too old.'

Hitler and Stalin in a Punch cartoon meeting over the prostrate body of
Poland which Germany and the USSR invaded in 1939.

Jack fell down and broke his crown
And Jill came tumbling after.
Up got Jack, and home did trot As fast as he could caper
He went to bed
and bound his head
With vinegar and brown paper.

The roots of this child's nursery rhyme is in France and the Jack and
Jill referred to are Louis XVI who was beheaded [lost his crown] followed
by his Queen Marie Antoinette [who came tumbling after]. The words and
lyrics were made more palatable for the nursery by giving it a happy
ending and has further been altered by the passage of time. The actual
beheadings occurred in 1793. The first publication date for the lyrics of
this nursery rhyme is 1795 which tie-in with the history and origins

The Knight and the King

A knight and his men return to their castle after a hard day of
fighting.

'How are we faring?' asks the king.
'Sire,' replies the knight. 'I
have been robbing and pillaging on your behalf all day, burning the towns
of your enemies in the west.'

See more on the 10 Commandments »