Here is our selection of funny football pictures and amusing articles, and
stupid footballer's remarks.

Do
Not Wear Football Boots on the Pitch!

They must have know that the Colombian team was in town!

Most international footballers get new boots every game but not the
Columbians.  The Colombian football team, who have not qualified for the World Cup but play Germany in a friendly, had to cancel their
training session Wednesday because they had no boots.

The South Americans arrived earlier in the day from Poland where they
beat the Polish side.  The players' boots somehow went walkabout
between the two destinations. 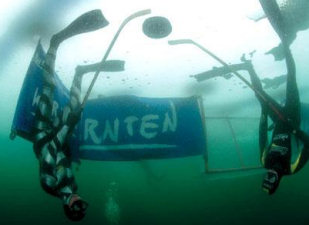 The first ever World Cup in the new extreme sport of underwater ice hockey has been staged in the frozen lake of Weissensee [White Sea lake] in Austria over the last weekend in February.

The players, wore wetsuits, masks and flippers, chased a Styrofoam puck around a "rink" six metres wide and eight metres long, having to resurface every 30 seconds for air through special holes drilled in the
ice.

In the final on Sunday, Finland defeated Austria to finish first, while Slovakia was placed third.

Here we have trusty technology from the past:

Crowds for The
Big Match

Funny Football Picture - Nicu wrote in to say he thinks this photo was
taken in Romania, because Asigurari means insurance in Romanian.

Real possession football, this.  And Zico's
lost it.
John Helm

I think Charlie George was one of Arsenal's
all time great players. A lot of people might not agree with that, but I personally do.
Jimmy Greaves

That goal surprised most people, least of all myself.
Garth Crooks

Nottingham Forest are having a bad run, they've lost six matches in a row now without winning.
David Coleman

At the end of the day, the Arsenal fans demand that we put eleven players on the pitch.
Don Howe

I wish that our goal keeper had this long!

Footnote:
Please write to Will and Guy if you have any funny football pictures.