Here is Will and Guy's collection of funny football pictures, signs and
photos.

I wonder if this picture was taken in in the USA?  My thinking is yes it's American; because in England we call the game football (not
Soccer), whereas in America football would mean the grid iron game.

Soccer may only be played in the archery range!

Put
Him Out of His Misery!

That game of football makes no sense to me. Why do they have 22 big
guys fighting over one silly little football? A whole lot easier to give
each of them a football and call it a day!

A spectator at a local league match at
Bransbury Park, Portsmouth kept up a constant barrage of insults and derogatory remarks directed against the referee.

Finally the referee could stand it no longer. He marched over to the
sideline and, looking the noisy spectator squarely in the eye, shouted,
'Look here - I've been watching you for the last twenty minutes
.........................'

'I thought so, 'the spectator retorted loudly, 'I knew you couldn't
have been watching the game.'

Julian Ryall reported from Tokyo for The
Scotsman newspaper on January 10, 2006, that Japanese robotics experts at Keio University, Tokyo claim that their robots will beat humans at football one day. The robots stand some 38 cm tall and weigh only
2.4kg.

Shu Ishiguro, head of Robot Laboratory in Osaka, is confident that this will happen and that by 2050 the human winners of the World Cup will be defeated. His fellow scientists are working on
prototypes as you are reading this report.

Will is doubtful that this could ever happen but has to admit that he probably won't
be around to see it if it does come to fruition.

N.B. England have
their own Robot - Peter Crouch complete with dance

We all know that goal keepers are crazy, but road football?  Nutty.
By the way, who is that goal keeper?  Guy thinks it's Oliver Kahn, the German and Bayern München goalie.

Incidentally the only thing robotic about Oliver Kahn was is ability to locate the ball in the
penalty area. 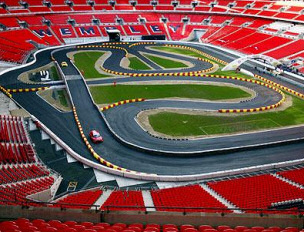 The hallowed turf at the newly built Wembley where football is normally played [soccer to our visitors from the USA] has been transformed into a race track.

It's sure to come as a
shock to football fans who were already horrified by the state of the pitch. The makeover is in preparation for the Race of Champions on Sunday, December 16, 2007, when 16 of the world's best drivers, including
Michael Schumacher and Jenson Button, go head-to-head. The drivers will compete in identical cars around the specially designed parallel track.  The pitch, which was highly criticised before, during and after
England's 3-2 defeat to Croatia in the crucial Euro 2008 qualifier, will be re-laid afterwards.

In between the Race of Champions heats, the organisers say drivers and fans will be 'wowed' by a series of
daredevil exhibitions, including bike stunts and F1 car demonstrations. Reports the Telegraph online.

For old timers, going to the race track at Wembley stadium would mean
watching 'cherry hogs' = dogs, and not cars.