1) What a
Hotel in York Keeps in Its Wine Cellar:

Staff at a Grade I listed Georgian town house hotel in the centre of York,
England welcomed an unusual guest in from the pouring rain - a drenched ferret. The ferret scuttled into the Judges'
Lodgings Hotel when the
door opened one wet night, reports the Yorkshire Evening Press. 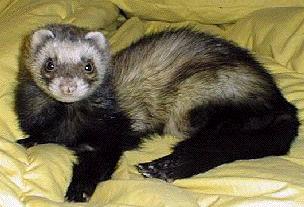 Staff named the ferret Pierre, because they thought he looked French, and they have ' put him up' in a cardboard box in the wine cellar.
They say he seems tame - despite nipping a number of workers - and are hoping the ferret's owner comes forward to take him home.

Duty manager Catherine Bell said, 'We'
d opened the door to let someone come in, and the ferret scuttled in
with them.'
He was soaking wet, so I think he'
d been outside for at least a couple of hours.'

Assistant manager Julie Smith continued, 'The night porter caught him and put him in the wine cellar, in a crisp box.' We did some research on the internet, and found that ferrets like kitten food. So, We've gone out to buy some. He has bitten some people, but so far he's
left me alone.'

2) Ferret with only two
legs

At the fabric counter of Heelas department store [John Lewis] in Reading, UK, the very pretty Rebecca enquired of the male counter staff, 'I would like to buy this material for a new dress. How much
does it cost?'

'Only one kiss per metre, 'replied the young man with a rather unpleasant ferret-like smirk.

With
expectation and with anticipation written all over his face, the staff member quickly measured out the cloth, wrapped it up, then in a teasing fashion held it out.

Rebecca snapped up the package, pointed to
the old, grizzled and toothless fellow standing beside her, smiled, and said, 'My Grandad will pay the bill.'

Footnote:
Please send us your funny ferret pictures and stories