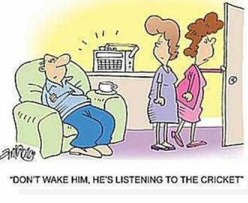 Will and Guy are building a collection of funny cricket stories and amusing anecdotes, this is what we have so far.. 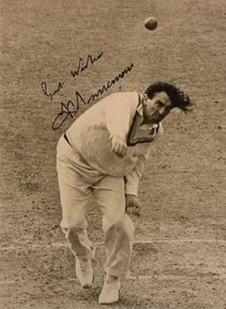 Frederick Sewards Trueman [6th February 1931 - 1st July 2006] John Arlott, the poetic cricket commentator, raconteur and wine enthusiast from Hampshire, wrote that Trueman approached the wicket 'with the majestic rhythm that emerges as a surprise in the Spanish fighting bull'.  Beginning at a steady pad, he gradually accelerated, hair flopping, until he completed his charge in an explosion of malevolent power. Trueman rounded off this spectacle with histrionic gestures of despair, rage or triumph. Arguably the finest fast bowler that England [and of course Yorkshire] has produced, Freddie Trueman's ability did not end there say Will and Guy. He was a splendid story teller and would regale audiences with his "cricketing tales". Did You Know? Trueman played football for Lincoln City and turned down professional terms to concentrate on cricket. Some might argue that many of his stories were apocryphal; others might remark that it matters not since the tales are fun and indeed funny. We hope you will enjoy the items we have chosen to share with our readers here.

Headingley On one occasion, an opposition batsman walking through the gate onto the outfield was told, 'Don't bother shutting it. You'll be back soon.' Versus Cambridge University When a Cambridge University student FS Trueman had just bowled said, 'That was a very good ball, Mr Trueman', he responded allegedly with, 'Ay, 'twas wasted on thee.' I'm Good! He enjoyed being told he was good, too, and along these lines a lovely tale told by Richard Hutton reads as follows: after Freddie had returned yet another of his many five-wicket performances. 'Well bowled, Fred,' he said. 'Outswingers, inswingers, bouncers, yorkers, you bowled the lot.  Tell me, did you ever bowl a plain straight one?' Quick as a flash came the reply, 'Aye, one. But it was so fast it went through him like a dose a salts and knocked all three down.' An allegedly true story about Fred on tour in the West Indies Apparently Fred, at a reception during a tour of The West Indies, approached an elegant woman and made a pass at her. She allegedly replied, 'As a woman, Mr Trueman, I am extremely flattered. But, as the governor's wife. I am absolutely outraged!' See more  of Trueman's cricket stories. 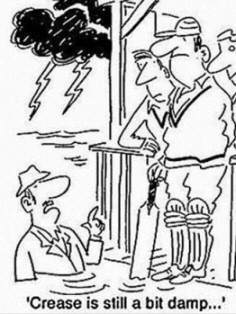 Bottle of Beer Rahul was having a bad time. He played and missed at every ball and was becoming hotter and more flustered every minute. As the bowler was walking back; the batsman turned to the wicket-keeper. 'Phew,' Rahul said, 'what couldn't I do with a bottle of beer.' The wicket-keeper thought for a moment. 'Hit it with the bat?' The New Batsman Shane, a batsman was new to the side, and in his first innings he did so badly that the crowd began to slow hand-clap and barrack him. Things got worse. The language got more and more abusive, his play-more inept, and finally he was out. As he dashed for the pavilion, rotten fruit and eggs were thrown at him, but he managed to gain the safety of the dressing-room, where the captain was waiting for him. 'Blimey!' panted the batsman, 'they don't like that umpire, do they?' The Great Sir Vivian Richards It was a county match in England between Somerset and Glamorgan. An unknown batsman with unknown talent, named Vivian Richards was at the crease. Greg Thomas, the Glamorgan fast bowler thundered in and beat the great man's bat. 'It's red and it's round. Can't you see it?', the bowler taunted Richards. The next ball was an action replay. The ball pitched three quarters of length on middle and off, seamed away, and once again Richards was all at sea and comprehensively beaten. 'It's red and it's round and it weighs four-and-a-half ounces. Can't you see it?', Greg Thomas quipped. Richards took a stroll, summoned his powers of concentration, swung his arms around, took a fresh guard and got ready for the next ball. Greg Thomas came running in. The delivery was right in the slot, and Viv launched into one of his trademark shots and smashed the ball out of the ground and straight into the river that flowed around it. The maestro told the hapless bowler who almost died watching the ball go, 'You know what it looks like... now go and get it!'

Cricket in the UK

Bouncers In one of the most frightening exhibitions of fast bouncing bowling ever seen at Old Trafford occurred in 1948 during the England -v- Australia Test match. Lindwall was apparently awesome. He almost paralysed Compton's left arm, then, with a "no-ball" so much over the crease that he let the ball go its vicious way far down the pitch, he struck Compton's forehead as in fact Compton actually tried to hook and the missile flew off the edge of his bat. Compton staggered and was led from the field, his forehead bleeding. Stitches were sewn into the wound. He wanted to resume his innings but was advised by a doctor to rest awhile. Bill Edrich held the fort bravely. Compton, amazingly went to a net to find out if he could still see a quick ball, then resumed his Test match innings, stayed until close of play, and next morning carried his score to 145 not out. As Wisden recorded, Lindwall bowled bouncers with such force and dangerous aim that during this season of 1948 he knocked-out or hurt Compton, Todd, Washbrook [a great hooker], Keeton, Robertson and Watkins.

Billy was at school this morning and the teacher asked all the children what their Father's did for a living.  All the typical answers came out, Fireman, Policeman, Salesman, Chippy, Captain of Industry, etc. etc. but Billy was being uncharacteristically quiet, and so the teacher asked him about his Father. 'My Father is an exotic dancer in a gay club and takes off all his clothes in front of the other men. Sometimes if the offer is really good he'll go out with a man, rent a cheap hotel room and let them sleep with him'. The teacher quickly set the other children some work and took little Billy aside to ask if that was really true. 'No' said Billy 'he plays CRICKET for ENGLAND, but I was just too embarrassed to say'.

Michael Vaughan and Andrew [Freddie] Flintoff, now elderly, 85 and 82 years old, are sitting on a park bench outside Lord's cricket ground feeding pigeons and talking about funny cricket moments, past Ashes series, and tours like they do every day. Michael turns to Freddie and asks, 'Do you think there's cricket in heaven?' Flintoff thinks about it for a minute and replies, 'I dunno. But let's make an agreement: if I die first, I'll come back and tell you if there's cricket in heaven, and if you die first, you do the same.' They shake hands on it. Sadly, a few months later, poor Freddie passes on. One day soon afterward, Vaughany is sitting there feeding the pigeons by himself when he hears a voice whisper, 'Michael................Michael' Vaughan responds, 'Freddie, is that you?' Yes it is, Michael, 'whispers Freddie's ghost. Vaughany, still amazed, enquires, 'So, is there cricket in heaven? 'Well, 'says Freddie, 'I've got good news and bad news.' 'Gimme the good news first, 'says Vaughany. Freddie opines, 'Well... there is cricket in heaven.' Vaughan says, 'That's great! What news could be bad enough to ruin that?' Freddie sighs and whispers, 'You are going to open the innings this Friday.' See another funny cricket story.

Table-topping Dishforth were expected to beat bottom-placed Goldsborough in the Nidderdale Amateur Cricket League, North Yorkshire, but not quite as easily as things turned out. Goldborough 2nd X1 came close to setting an unwanted record after ten batsmen were out for a duck. Not one of the Goldsborough players scored a single run; although they did clock up five extras. Their opponents quickly knocked off the six runs needed for a win and the game was over. The Dishforth captain Steve Wilson, told reporters, 'If I hadn't seen it, I wouldn't have thought it possible.' The Goldsborough captain Peter Horseman commented, 'It was surreal and embarrassing. We almost got a run, but the batsman turned it down because he' d just been hit on the foot.' Here is a photo of 4 of the team. 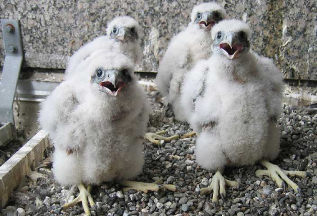 Question: How could a cricket hat-trick span 3 overs? Answer: Over 1, last ball the bowler gets the 9th batsman out Over 2, first ball bowler dismisses the 10th batsman. Second innings! The same bowler takes a wicket with his first ball.

The Definition of Cricket as Explained to an American:

You have two sides, one out in the field and one in. Each man that's in the side that's in goes out, and when he's out he comes in and the next man goes in until he's out. When they are all out, the side that's out comes in and the side that's been in goes out and tries to get those coming in, out. Sometimes you get men still in and not out. When a man goes out to go in, the men who are out try to get him out, and when he is out he goes in and the next man in goes out and goes in. There are two men called umpires who stay all out all the time and they decide when the men who are in are out. When both sides have been in and all the men have been out, and both sides have been out twice after all the men have been in, including those who are not out, that is the end of the game.

Many cricket lovers will remember with affection the immortal Garfield Sobers hitting 6 sixes in an over; younger watchers may have seen Yuvraj Singh achieve the same feat. Not many people were able to witness Jamie Lee hitting 11 sixes in 12 balls. Jamie Lee, 18, normally plays for Mildenhall Cricket Club's First Xl but was playing for the Second Xl because of a shoulder injury; he is, in fact, known as a bowler which, say Will and Guy, makes the story all the more remarkable. 'Luckily, my shoulder injury didn't affect my batting,' the teenager from Suffolk, England, cricketer told us with a broad smile. In the first over, Jamie thrashed all six deliveries from a spin bowler over the boundary. In the next over, Jamie, again, faced a spin bowler: this time he swung at the first ball - and missed; however, he middled the next five, chalking up 66 runs in just 12 balls. Incredible. Jamie, who scored a further five sixes in his 132 not out, commented, 'I smashed most of the sixes straight over the bowler's head. It was a brilliant feeling. There were some polite claps when I got my first six and then the excitement mounted. People were cheering on the boundary and when I got my sixth six in a row, they just went mental.' Not surprisingly his batting led Mildenhall to a swift victory: they beat the 208 runs knocked up by Walsham-le-Willows in a mere 13 overs - absolutely incredible. See more interesting cricket reports. Footnote: Please send us your funny cricket story.