I wondered why the baseball was getting bigger.

Then it hit me.

You should not throw baseballs up when the ceiling fan is on.  When using a
ceiling fan as a bat, you have to throw the ball up a few times before you
get a hit.  A ceiling fan can hit a baseball a long way! 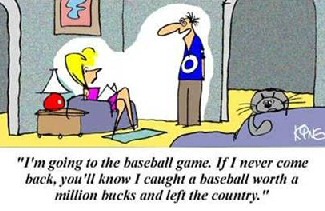 Yogi Berra it has to be said
developed a style of homespun humor all of his own.  It's also worth
remembering that Yogi was a baseball legend with New York Yankees back in
the 1950's.  And he still holds the record for winning the most World
Series.

Intro
At Jack Russell Stadium in Clearwater, Florida, on June 26th 1985,
organist Wilbur Snapp played "Three Blind Mice" following a call by umpire
Keith O'Connor.  The umpire was not amused, and saw to it that Mr. Snapp was
ejected from the game.

Say It Again
After being snubbed from the All-Star game by Boston manager Darrell
Johnson, Baltimore's Jim Palmer claimed he was misquoted for calling Johnson
an idiot.

'I did not call Johnson an idiot. Someone else did and I just agreed,'
Palmer said.

Foul Play?
Pirates manager Danny Murtaugh couldn't resist a jab at Dick Stuart.  After the public address announcer warned fans that
"Anyone who interferes with the ball in play will be ejected from the
ballpark," Murtaugh replied, 'I hope Stuart doesn't think that means him.'

Ruth or DiMaggio?
Bill walks into a bar with a dog.
The bartender says, 'You can't bring that dog in here.'

'You don't understand,' says Bill. 'This is no regular dog, he can talk.'

'And who's the greatest baseball player of all time?'
'Ruth!'

The bartender is furious,
'Listen, pal,' he says, 'get out of here before I belt you.'  As soon as
they're on the street, the dog turns to Bill and says, 'Bill, do you think I
should have said "DiMaggio"?'

It took me seventeen years to get 3,000 hits in baseball.
I did it in one
afternoon on the golf course:
Babe Ruth

One morning in elementary school, the students were going to a geography
class. The teacher wanted to show the students where cities and states are.

The teacher asks the class, 'Does anyone know where Pittsburgh is?'

Francis raises up his hand and says, 'Yeah, Pennsylvania.'
The teacher
replies, 'Very good, Francis, now can anyone tell me were Detroit is?'

Trying to confuse the children, she now asks, 'Where's Kansas City?'
Ross raises his hand and says, 'Oh, oh, pick me, I know?' 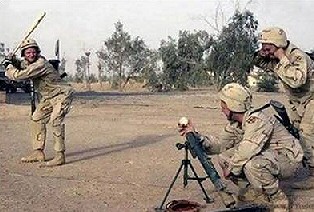 Ever wonder what type of equipment the top MLB players are using?  Check out the latest line of Nike baseball gear online.

'I am a Yankees fan,' a first-grade teacher explains to her class. 'Who
likes the Yankees?'

Everyone raises a hand except one little girl. 'Janie,' the teacher says,
surprised. 'Why didn't you raise your hand?'

'Well, if you are not a Yankees fan, then what team do you like?'
'The Red Sox,' Janie answers.

'Why in the world are you a Red Sox fan?'
'Because my mom and dad are
Red Sox fans.'

'That's no reason to be a Red Sox fan,' the teacher replies, annoyed.
'You don't always have to be just like your parents. What if your mom and
dad were morons? What would you be then?'

Please send Will and Guy your favorite
baseball jokes and funny stories.