Look out for Lemfids driving on a road near you, they are half Lemming and half Trifid.  Will and Guy are going to try to explain this Football flag mania that sweeps through English summers roughly every 2 years.  The latest invasion will be in the summer of 2014. Lemfids look a bit like cars, if fact they may have been cars in a former life, but it's as if they went into decay and sprouted strange appendages.  These appendages bear a strange resemblance to flags, but are made of much shoddier material.  All-in-all, the effect is rather like a Trifid from a bad 1960's horror movie.

Close examination of the Lemfids reveals that their metal bodies are made in Japan, while their nylon arms are of Chinese extraction.  Another interesting fact, despite superficial differences, all Lemfids conform to the 'Gwill' constant, which states that the age of the driver + the age of the vehicle = 31. What you will see in early June is Lemfids swarming on English roads.  They may appear in other countries, but sightings in Wales and Scotland are rare.  It seems that Lemfids are performing a strange mating ritual, we have it on good authority that this protracted courtship will reach a climax with a spectacular dance at on Midsumers Day. As soon as England lose to Costa Rica, and thus are eliminated from the World Cup, all the Lemfids will make one last journey to Stonehenge.  It will be a sight to behold as just after midnight on June 24th / 25th all this generation of Lemfids will wave their flags at their ancestral site in Wiltshire.  After approximately 10 laps circling the ancient stones on the A344, the Lemfids will form up and drive down the A303 to Southampton.  They will then splutter along the coast road; just after they reach Brighton the Lemming effect takes over and all the Lemfids will make a bee line for Dover where they will drive serenely off the white cliffs. 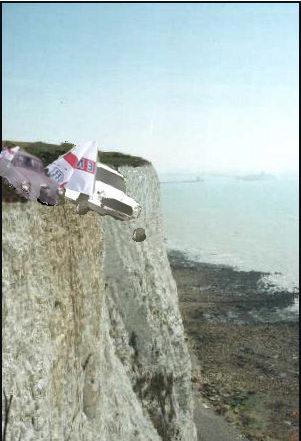 Thus when you wake up on 25th of June all the Lemfids will be gone from the roads.  Yet, the amazing thing about the Lemfid is that World Cup flag mania undergoes regeneration and will return the next time England feature in a major football tournament.

Look Out for These Lemfid Flags

Because of the poor quality of driving in the England, the Department for Transport has now devised a new scheme in order to identify poor drivers and give good drivers the opportunity to recognise them whilst driving. For this reason when ever England play in a tournament, Lemfid drivers display the following bad behaviour:

These drivers will be issued with flags, white with a red cross, signifying their inability to drive properly. These flags must be clipped to a door of the car and be visible to all other drivers and pedestrians.

Those drivers who have shown particularly poor driving skills will have to display a flag on each side of the car to indicate their greater lack of skill and general lower intelligence mindset to the general public. Please circulate this to as many other motorists as you can so that drivers and pedestrians will be aware of the meaning of these flags. Department for Transport 17th May 2014.

William Hodgson had decked out his Sunderland house with flags as though England had already won the World Cup. However, an anonymous resident complained to Sunderland Housing Group that the decorations were making the street look untidy. Although the Sunderland House committee supported the England team, they still ordered Mr Hodgson to remove some of the flags in the interests of neighbourhood harmony. Mr Hodgson said: 'I'd like to know who made the complaint, but they said they weren't obliged to tell me. ' I'd just like to ask them why.' He added that it had taken three weeks to put up the flags, with the help of his son. Sunderland Housing Group said in a statement: 'Sunderland Housing Group, like everyone in England, is firmly supporting the England team and is happy for its tenants to demonstrate their national fervour, by flying the flag on their homes. 'Sadly some of our tenants have upset their neighbours by bedecking their entire homes in flags. 'They've asked us to have the flags removed. In the interests of neighbourhood harmony, We've asked the Hodgsons to tone it down a bit, but we hope the flag continues to fly in Kingsway and that everyone enters the spirit of supporting our boys.' 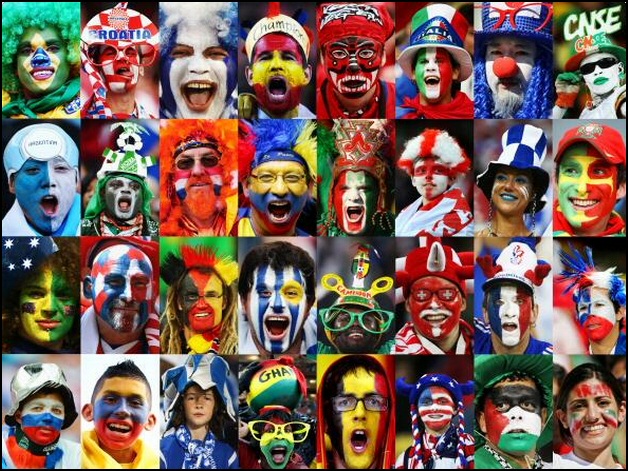