The art of medicine consists in amusing the patient while nature cures the
disease.  Voltaire

One day, Harry went to see
his doctor and told him that he hadn't
been feeling at all well.  The doctor examined Harry, left the room, and came back with three different bottles of pills.

The doctor replied, 'Harry, you're not drinking enough water.'

Gloria, out for
a walk, notices this little old man rocking in a chair on his porch and approaches him.

'I can't
help noticing how happy you look, 'Gloria smiles at him, 'What is your secret for a long happy life?'

'I
smoke three packs of cigarettes a day, 'he replied, 'I also drink a case of whiskey a week, eat fatty foods, and never exercise.'

'That's
amazing!'
Gloria responds, 'How old are you?'

An artist asked the gallery owner if there had been any real
interest in his paintings which had been on display for the previous few weeks.

'I have good news and bad news,' the owner replied. 'The good news is that a gentleman inquired about your work and wondered if
it would appreciate in value after your death. When I told him it would, he bought all 17 of your paintings.'

'The
buyer was your doctor.'

'What kind of job do you do?' a lady passenger asks the man travelling in her train compartment.

'I'm a Naval surgeon,' he replies.

'Good grief!' splutters
the lady, 'How you doctors specialise these days.' 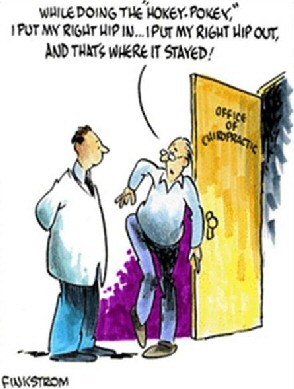 'Every GP [General Practitioner - Doctor] is to be instructed to tell fat patients that they should lose weight, putting doctors in the front line of a new
offensive to tackle Britain's
growing obesity problem, 'records The Times on May 3rd 2006.'  In future GPs will have to treat obesity as if it were any other medical condition and advise the overweight to slim.

It is the first time that doctors have been asked to cajole fat patients, old and young, to eat less, improve their diets and take exercise. The move by Caroline Flint, the Public Health Minister, is
directed in particular at children and young people who need help to lose their excess pounds.'

Perhaps if this proves difficult we will hear this kind of conversation:

Patient: It isn't
possible
that I'm as overweight as you say I am.

Doctor: Maybe you would prefer to look at it in a different way.  According to this chart, you're about 10 inches too short.

Dopey Danny was an extremely nervous patient whose imagination afflicted him with all kinds of misfortunes that never materialised. One afternoon he staggered into
the house. Dopey Danny was bent forwards. He tottered to a chair and, still curled into a half-moon shape, dropped into it. 'Jenny,' he gasped, 'it's happened at last. There was no warning. All of a sudden I
found I couldn't straighten up. I can't lift my head.'

When the doctor had arrived and looked at Danny, Jenny inquired, 'Is there any hope, doc?'

'Well,' the GP replied, 'it would help a great deal
if he would undo the third buttonhole of his waistcoat from the top button of his trousers.'

Dr Trebble examined Maria and then took the husband to one side saying,
'I don't like the looks of your wife at all.'

'Me neither doc,' said Ross, her husband. 'But she's a great cook and is
really good with the kids.'

A doctor of psychiatry is doing his normal morning rounds at the hospital when he enters the ward.

He finds Arnold sitting on the floor, pretending to saw a piece
of wood in half.  Meanwhile Mark is hanging from the ceiling by his feet.

The
consultant asks Arnold what he's doing. Arnold smiles and answers, 'Can't you see I'm sawing this piece of wood in half?'

The consultant nods and continues talking to Arnold and enquires what Mark is doing on the ceiling. Arnold looks up and murmurs, 'Oh, he's my friend, but he's a little crazy. He thinks he's a lightbulb.'

The consultant looks up and notices that Mark's face is turning red and blue.

The consultant remonstrates with Arnold and says, 'If he's your friend, you should get him down from there before he hurts himself.'

Arnold replies with a sigh, 'What? And work in the dark.' 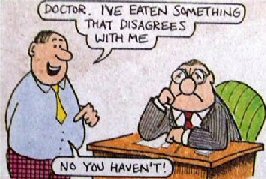 A psychiatrist's secretary, Paula, walks into his study and says,
'There's a gentleman in the waiting room asking to see you.  Claims he's
invisible.'

Dr Walmsley, the psychiatrist responds,
'Paula, tell him
I can't see him.'

I Don't Want To Be A Doctor For The Following Reasons

The chiropractor called Mrs Levy saying, "Mrs Levy, your check came
back." Mrs Levy responded, "So did my arthritis!"

I told the doctor I broke my leg in two places.

He told me to quit going
to those places.  Henny Youngman

One of the first duties of the physician is to educate the masses not to
take medicine.
Sir William Osler

I've wrestled with reality for 35 years, Doctor, and I'm happy to state I
finally won out over it.
Mary Chase

My doctor gave me two weeks to live. I hope they're in August.

The best doctor in the world is the veterinarian.
He can't ask his
patients what is the matter-he's got to just know.  Will Rogers

A man walked into the doctor's, The doctor said 'I haven't seen you in a
long time'
The man replied, 'I know I've been ill'.  Tommy Cooper

During a patient's two week follow-up appointment with his cardiologist,
he told his doctor, that he was having trouble with one of his medications.

'Which one?' The doctor asked.

'The patch' he replied.  'The Nurse told me to put on a new one
every six hours and now I'm running out of places to put it!'

The doctor had him quickly undress and discovered what he hoped he
wouldn't see.  Yes, the man had over fifty patches on his body!

Now, the instructions on the packaging include: 'Removal of the old patch
before applying a new one'.

A man comes into the Emergency Room and yells . . .'  My wife's going to have
her baby in the cab.'

As the on-duty doctor I grabbed my stuff, rushed out to the cab, lifted the lady's dress and
began to take off her underwear.

Suddenly I noticed that there were several cabs - and I was in the wrong
one.