Amy to X-ray technician after swallowing some
money:
'Do you see any change in me?'

Allan, a mechanic, was removing a cylinder head from a Harley-Davidson motorbike, when he spotted a world-famous heart surgeon in his garage. The heart surgeon was waiting for the
service manager to come and take a look at his bike.

Allan shouted across the garage, 'Hey Doc can I ask you a question?'  The famous surgeon, a bit surprised, walked over to Allan.  Allan straightened up,
wiped his hands on a rag and asked, 'So Doc, look at this engine.  I also can open hearts, take valves out, fix'em, put in new parts and when I finish this will work just like a new one.  So how come I work
for a pittance and you get the really big money, when you and I are doing basically the same work?'

The surgeon paused, smiled and leaned over and whispered in Allan's ear, 'Try doing it with the engine
running.'

1) Long and Short of the Problem
Adam, an elderly man
was seated in the doctor's waiting room. When he was called in to see the
doctor, Adam slowly got up, and, grasping his cane and hunching over, slowly
made his way into the examining room.

After only a few minutes, Adam emerged from the room, walking completely
upright. Paul, another patient who had watched him hobble into the room all
hunched over, stared in amazement. 'That must be a miracle doctor in there.'
he exclaimed. 'What treatment did he give you? What's his secret?'

Adam stared at Paul and said, 'Well, the doctor looked me up and down,
analysed the situation, and gave me a cane that was four inches longer than
the one I had been using.'

2) Struck Down?
Ronan kept going to the ophthalmic
doctor because his eye hurt and the doctor finally discovered his problem.
The Doc told him, 'Your eye hurts when you drink tea, so you can't drink
tea.'

Ronan stuttered, 'But I love tea.' 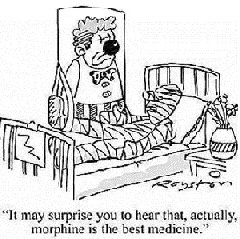 The doctor replied, 'Okay, as long as you take the spoon out.'

3) Time Cures
'Doctor Mayo,' John says, 'Whenever I
get up after a sleep, I feel dizzy for half an hour, then I'm all right.'

'Then wait for half an hour before getting up,' replies Doctor Mayo
conclusively.

4) Home - Or Away?
A famous surgeon went on a safari
in Africa. When he came back, his colleagues asked him how it had been. 'Oh,
it was very disappointing,' he said. 'I didn't kill a thing. I'd have been
better off staying here in the hospital.'

5) Father - Or Son?
Iain speaks frantically into the
phone, 'My wife is pregnant, and her contractions are only two minutes
apart.'

'Is this her first child?' the doctor queries.

What Sort of Medicine is Practiced
Here? 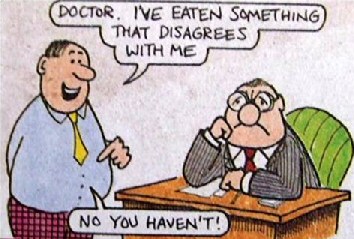 Keep Taking the Medicine
Patient: It's been one month since my last visit and I still feel miserable.

Doctor: Did you follow the instructions on the medicine I gave you?

Patient: I sure did - the bottle
said 'keep tightly closed.'

Quick Diagnosis
Nurse: 'Doctor, Doctor the man you've just treated collapsed on the front step.
What should I do?'

Doctor: 'Turn him around so it looks like he was just arriving!'

Eating Disorder
A mother complained to her
consultant about her daughter's strange eating habits. 'All day long she lies in bed
and eats yeast and car wax. What will happen to her?'

'Eventually,' said the
consultant, 'she will rise and shine.' 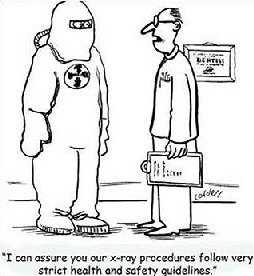 A live-in face
When I was born the doctor took one look at my face .... turned me
over and said. Look ... twins!  Rodney Dangerfield

What Vision
Amy to X-ray technician after swallowing some money:
'Do you see any change in me?' 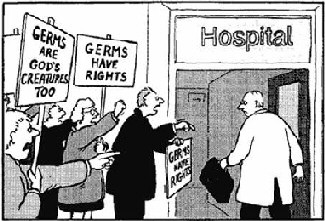 Kerry is medical student. When she was studying the toxicology module she attended the 'poison control
centre' in the city.

Kerry told a tale that a woman had 'phoned who was very upset because she had caught her little daughter eating ants. Kerry quickly reassured her that the ants were not harmful and there
would be no need to take her daughter to Southampton General hospital. She calmed the caller down. At the end of the conversation the woman happened to mention that she had given her daughter some ant poison to
eat in order to kill the ants.

Kerry told her that she better take her daughter to accident and emergency straightaway!

Headache?
For a headache, nothing acts faster
than anadin.
So I take nothing.

Doctor Khan was giving a lecture to a group of medical students at the
city hospital.

Pointing to the x-ray, he explained: "As you can see, this patient limps
because his right fibula and tibia are radically arched."

The doctor looked up at the assembled students, and asked Sidney "Now
what would you do in a case like this?"

Sidney piped up: "I suppose I would limp too." 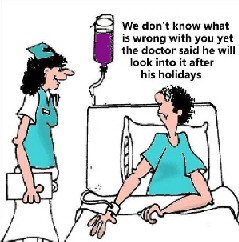 Brenda make an appointment to see her doctor, because she is worried
about her husband's bad temper.

Brenda says: "Doctor, I don't know what to do.  Every day my husband
Jimmy seems to lose his temper for no reason. It's beginning to scares me."

The Doctor says: "I have a cure for that.  When it seems that Jimmy
is getting angry, just take a glass of water and start swishing it in your
mouth. Just swish and swish but don't swallow it until he either leaves the
room or calms down."

Brenda says: "Doctor that was a brilliant idea! Every time my husband
started losing it, I swished with water. I swished and swished, and he
calmed right down! How does a glass of water do that?"

Dr Thomas says: "The water itself does nothing. It's keeping your mouth
shut that does the trick."

An element of the admission procedure in the hospital where
consultant Tim Westwood worked, was to ask the new patients if they suffered from any allergies.

If they did, Tim got it
printed on a special 'allergy band' which was then placed on the patient's wrist as a reference for all other hospital employees.

On one particular occasion Tim asked an elderly woman if she had any
allergies. The old dear responded by saying that she was unable to eat bananas.

Tim received a considerable surprise later in the day when a very irate son came out of the ward demanding, 'Who's
responsible for labelling my mother 'bananas'?'

'What kind of work do you do?' a woman passenger enquired of the man travelling in her train compartment.

'I'm a Naval surgeon,' he replies.

'My
word!' spluttered
the woman, 'How you doctors specialise these days.'

Will and Guy wonder what it that makes for a funny doctor joke?
After all, medical matters are not an intrinsically humorous subject.
We have come to the conclusion that for many illnesses laughter is indeed
the best medicine, or at least helps people to cope.  Thus we continue
our quest for more doctors' jokes. 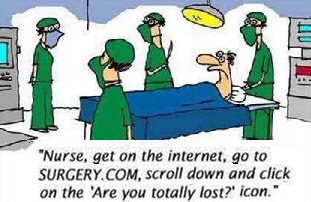 Earlier this year Winston lost his ear. Luck would have it that it was replaced, with a pigs ear, by
doctors. They cut it to size and made it look more human before sewing it, invisibly, in place.

Several weeks passed before Winston felt it necessary to return to his surgeons.

When he did, Winston complained bitterly, 'Doctor, I keep hearing this noise and its doing my head in. 'The
doctor,
totally unconcerned answered, 'Don't
worry, its just a bit of crackling.'

Doctors and Quacks
In Britain today, there are about 50,000 practitioners of alternative
medicine, but only about 30,000 qualified doctors.

The Five Best, Clean and Hilarious Conversations Overheard in
Hospital 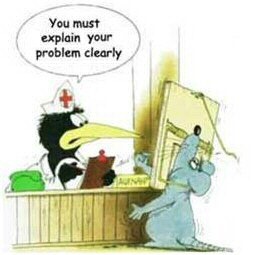 Doctor:
Easy straightforward, you have a
sore finger!

Visit To the
Doctor (Doctor yarn sent in by reader)

One Wednesday, Murphy went to a doctor to talk about his wife. He says to the doctor, 'Doctor, I think my wife is deaf because she never hears me the first time and I always have to repeat things.'

'Well, 'the doctor
replied, 'Go home and tonight stand about 15 feet from her and say something to her. If she doesn't
reply move about 5 feet closer and say it again. Keep doing this so that we'll get an idea about the severity
of her deafness'.

Sure enough, Murphy goes home and does exactly as instructed. He starts off about 15 feet from his wife in the kitchen as she is chopping some vegetables and says, 'Betty, what's
for
dinner?'
He hears no response. He moves about 5 feet closer and asks again. No reply. He moves 5 feet closer. Still no reply. He gets fed up and moves right behind her, about an inch away, and asks again, 'Betty, what's
for dinner?'

Betty says, 'That's
the fourth time you asked me. It's
meatloaf.'

Footnote:
Please write to Will and Guy if you have any
good doctor jokes.

For example, One has a greater sense of intellectual degradation after an
interview with a doctor than from any human experience.  Alice
James