Two cannibals are eating a clown. One says to the other: 'Does this taste funny to you?' 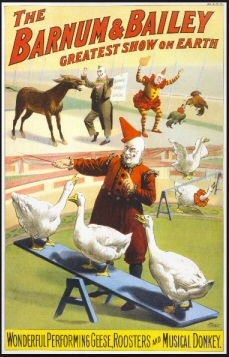 P.T. Barnum, the owner of the Barnum & Bailey circus was the originator of the phrase "There's a sucker born every minute".  Sometime in the early 1900's he offered $10,000 in cash to any person who could thoroughly dupe, or sucker him.

Barnum was always looking for interesting new acts or novel creatures to exhibit, and one day he received a letter from a fellow in Maine who claimed to possess a cherry-coloured cat.  He asked Barnum if he were interested in such a thing for his circus.

Barnum contacted the man and said yes, if the cat were truly cherry-coloured, he'd gladly put it on display.

Well, a few days later a crate marked "live animal" was delivered to him.  When Barnum opened it, he found a somewhat frightened but otherwise perfectly ordinary-looking black housecat inside, along with a note which read:

"Maine cherries are black.
There's a sucker born every
minute..."

Thoroughly tickled, Barnum sent the man a cheque for $10,000.

(It's not known what happened to the cat, but maybe Barnum kept it as a reminder of the day he got suckered.)

Yesterday I went to the circus, at the concession booth I saw some tightrope Walkers.
What a weird flavour for a packet of crisps.

Footnote: This joke only works in the UK. Lay's Potato Chips (USA) and Walker's Crisps are the same product, just different names
on the wrappers.

Tim is a professional clown who entertains groups at parties and company picnics. On one occasion, an inebriated guest began heckling him in the middle of a performance, disrupting his act.

Ignoring the heckler wasn't working, so he used a different tactic. Slipping his arm around his shoulder, Tim looked him in the eye and said,

"Mister, I get paid to dress up and make a fool of myself -- what's your excuse?"

The Most Famous Clown in the UK - Coco 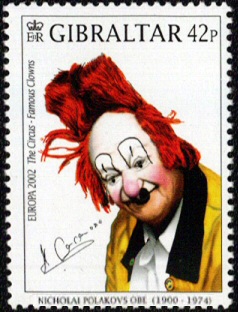 I remember Coco dressed in his auguste costume, he always wore very large shoes, and I loved his trick hair, which whooshed up at the sides when another clown surprised him.

We even had a catch phrase to honour this clown, if one of my friends said something incredolous, another would put him down by saying 'I should Coco'.

Jim and Janet from the circus go to an adoption agency. Officials there are rather concerned about their accommodation, but the couple produce photographs of their luxurious, 15 metre long caravan, the back half of which is a beautifully equipped nursery.

"But what about education for your child if you are constantly on the move?"
"We have employed an Oxford don who will teach all the main subjects, plus IT skills and Mandarin Chinese."

"And what about health?" "Our full-time nanny is an expert in paediatric welfare and diet."

Finally the agency are satisfied and ask, "What age of child are you looking for?"
"It doesn't really matter," they reply, "as long as it fits into the cannon."

After a long career of being blasted into a net, Marvin. the human cannonball was tired.  He told the circus owner he was going to retire.

"But you can't!" protested the boss. "Where am I going to find another man of your calibre?"

A circus owner walked into a bar. Everyone was crowded about a table watching a little show. On the table was an upside down pot with a duck tap dancing on top of it.

The circus owner was so impressed that he offered to buy the duck from its owner. After some wheeling and dealing they settled on $10000 for the duck and the pot. Three days later the circus owner stormed back to the bar in a rage.

"Your duck is a rip off! I put him on the pot before a whole audience and he didn't dance a single step!"
"So?" asked the duck's former owner, "did you remember to light the candle under the pot?"

A Clown in the Kitchen?

You know the restaurant has a clown as a chef when the food tastes funny.

Footnote: Please write to Will and Guy if you have any funny clown jokes.