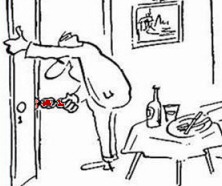 Christmas cracker jokes are called 'Bon-Bons' in countries such as Australia and South Africa.  Will and Guy are unsure if Christmas cracker
riddles are also called bon-bons in Ireland.  Most of these one-liners make us groan rather than laugh out loud.

Q: What's red and white and black all over?
A: Santa Claus after he slid down the chimney.

Q. Why was Cinderella no good at football?
A. Because her coach was a pumpkin.

Q. Why do reindeer scratch themselves?
A. Because they're the only ones who know where they itch.

Q. Why was Santa's little helper depressed?
A. Because he had low 'elf' esteem.

Q. How do Snowman travel around?
A. By riding an icicle.

Q. Where do Snow-women like to dance?
A. At Snowballs.

Q. Why did the man get the sack from the orange juice factory?
A. Because he couldn't concentrate.

Q: What would you call the ghost of a campanologist?
A: A dead ringer.

Q: What is Tiger Woods' wife getting for Christmas?
Q: Half of everything.  James orden

Q. What happened when Guy ate the Christmas decorations?
A. He went down with tinsel-itis.

Footnote: In Australia, and elsewhere, these cracker riddles are called Christmas bon-bon jokes.

Thanks to the Guardian Newspaper

As for the crackers themselves, they are also a part of New Year celebrations in Russia; where they are called "хлопушка".  It's no
surprise that in these former Soviet Union countries the crackers are more like pyrotechnical devices, than the humble British Christmas cracker.

Crackers, as in Christmas crackers were invented in Londong by Thomas J. Smith. He  ingeniously created the crackers as a development of his bon-bon sweets, which he sold in a twist of paper.

When Smith noticed his sales of bon-bons fall he racked his brains for a new ideas. His first tactic was to insert mottos into the wrappers of the sweets like fortune cookies, but this did not produce the boost in sales that he hoped for.

Then he was inspired to add the "bang" element when he heard the crackle of a log he had just put on the fire. The size of the paper wrapper had to be increased to incorporate the banger mechanism, and the sweet itself was eventually dropped, to be replaced by a small gift.

The new product was initially marketed as the 'Cosaque' [Cossack], but the onomatopoeic "cracker" soon became the commonly used name, as rival varieties were introduced to the market.

The other elements of the modern cracker, the gifts, paper hats and varied designs, were all introduced by Tom Smith's son, Walter Smith, to differentiate his product from the many copycat cracker manufacturers which had suddenly sprung up. 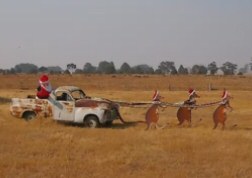 Daniel was so excited he just had to tell his parents, 'I learned in Sunday School today all about the very first Christmas. There wasn't
a Santa Claus way back then, so these three blokes on camels had to deliver all the toys. And Rudolph the Red-nosed Reindeer with his nose so bright wasn't there yet, so they had to have this big light in the sky to find their way around'.

Another Batch of Bon-Bons From Christmas Crackers

Why doesn't Santa suffer from claustrophobia when climbs down the chimney?
Because has had his flue jab.

What did Adam say to his girlfriend on December 24th?
'It's Christmas!  Eve.'

'Tiny', answers Mike.
'Why's that?' enquires the barmaid.
'Because he's my newt' concludes Mike.   (Will had to explain this riddle to me.  My newt - minute)

A Tale From Aussie

As you may know bon-bon jokes are popular in Australia, so this is why we have added this yarn.

Do you ever wonder who loves you?  Your wife?  Your dog?  You think they love you, but how do you know if they really do? How can you be sure? There is a way to find out and have peace of mind and it only takes one
hour.

Simply open the boot of your car, put your dog and your wife in there, close the boot, grab a couple of beers and watch the footy on the telly for an hour or so.  Then go back to the car, and open the boot.

Now, who is happy to see you?

New Section of Funny Christmas Riddles.  Classic Conundrums Each and Every One

What Will and Guy find is that we cringe at 12 out of these 15 Christmas Riddles - but smile at the other three bon-bons.