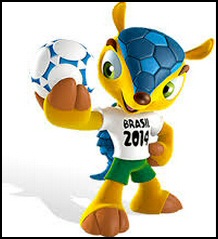 Fuleco the Armadillo will be the official mascot for the 2014 Brazil World Cup.
Ful denotes from Futebol and eco is short for Ecologia.

The mascot is a representation of the Brazilian three-banded armadillo
which is an endangered. Naturally, the animal carries the colors of the
Brazilian flag the armadillo is yellow, with green shorts and a blue shell.
Fuleco is dressed in a white shirt emblazed with the words "Brazil 2014".

Zakumi the Leopard the  Mascot for the 2010 World Cup

Za is the code for South Africa and, and "kumi", means ten in several
African languages, referencing the year 201...

Anybody who watches three games of football in a row should be declared brain dead.
Erma Bombeck

It was half way through the qualifying campaign and a the first choice team were doing really badly.

A spectator at a local league match at
Bransbury Park, Portsmouth kept up a constant barrage of insults and derogatory remarks directed against the referee.

'I thought so, 'the spectator retorted loudly, 'I knew you couldn't
have been watching the game.'