The aim of this page is to give you a flavour of  the dry, wry
and self-deprecating, Welsh humour.

A farmer was out on his Welsh hillside tending his flock one day, when he saw a man
drinking with a cupped hand from the stream which ran down from one of his fields. Realising the danger, he shouted over to the man, 'Paid a yfed y dwr! Mae'n ych-y-fi!' [Don't drink the water.  It's
disgusting!]

The man at the stream lifted his head and put a cupped hand to his ear, shrugged his shoulders at the farmer, and carried on drinking.

Still the walker couldn't hear the farmer.
Finally the farmer walked right up to the man at the stream and once again said again, 'Dwr yn ych-y-fi! Paid a'i yfed!'. [Water's disgusting.  Don't drink it!]

'I'm dreadfully sorry my good man, I
can't understand a word you say dear boy!  Can't you speak English?' Said the man at the stream, in a
splendid English accent.

Mrs Hopkins ordered a shoulder of Welsh lamb from her butcher, Mr Davies.
She suspected that the meat she had been given was not the genuine article.

'Are you certain this is real Welsh lamb?' Mrs Hopkins demanded, angrily.

'Ah, well, Mrs Hopkins,' confessed Mr Davies, the butcher. 'Look you,
that lamb was actually born in New Zealand but I can assure you that it had
Welsh parents.'

Three Englishmen and a Welshman

Three Englishman walk into a bar and spot a Welshman sitting alone at a table.

One
fellow said to the others, 'Let's pick a fight with that Welshman over there.'
His partner replied, 'Wait, we don't want to be arrested. Let's make him start the fight.'
The third Englishman said,
'Wait here chaps. I know how to do it.'

He went over to the Welshman and said, 'St David was a flippin' sissy.'
To this the Welshman replied, 'Ah well you don't say!' and calmly resumed drinking
his beer.

The second Englishman now tried his luck and said to the Welshman, 'St David was a stupid fool that wore a dress!'
The Welshman again replied, 'You're very sharp, you don't say!' and
calmly resumed drinking his beer.

The last Englishman told his friends he knew how to rile the Welshman and bounced up to the table and yelled, 'St David was an Englishman!'

The Welshman replied,
calmly, 'That's what your mates were trying to tell me.'

Will and Guy's Collection of Funny
Welsh Jokes About Family Life

The Bishop and His Wife

The Bishop of St. Asaph and his wife were on holiday in Spain and were
just signing in to their hotel in Seville.
Now, although bishops of the
Church in Wales have a title their wives are plain "Mrs". So the good
prelate wrote in the register:

The Bishop of St. Asaph and Mrs. Williams.

The hotel manager looked at the register in amazement and taking the
Bishop to one side said , 'In Spain, Bishop, we are not as is commonly said,
narrow-minded, and it is no concern of mine what your relationship is with
this woman, but do you not think you could conduct this affair a little more
discreetly?'

My Wife is from Wales

Martyn Williams from Carmarthen, South Wales, was visiting London for the
first time. He really wanted to buy a hat and the one he chose was priced at
£20 [$35 USD].

Martyn spoke to the shop assistant, 'Back home in Carmarthen I could get
a hat like this for only £5.'

The assistant answered, 'Well, sir, the thing is we have large shop
window here, often in the sun, and when the hats fade we send them to places
like Carmarthen. And by the way my wife comes from Carmarthen. You may have
known her.  She was Blodwyn Thomas, who lived at the bakery.'

'Yes, I know her, boyo,' replied Martyn smiling. 'She was very pretty. I
took her out many a time. But you know, when things get a bit faded in
Carmarthen we send them to London.'

'It is really none of my business,' whispered Mrs Evans, 'but have you
noticed what your daughter is doing?'
'Why, no. Is she up to anything
special?'

Mrs Jones' troubled brow cleared. 'Well, thank goodness,' she said
smiling, 'at last she's taken an interest in something besides running
around with boys.'

A Welsh lad came home from school and told his mother he had been given a part in the school play.

'Wonderful, 'replies his mother, 'what part is it?'

The boy says, 'I play the part of the Welsh
husband.'

The mother scowls and says, 'Go back and tell your teacher you want a speaking part.'

Footnote
As a Welsh husband myself, I can vouch for the truth of the above scenario.

Although it was some time since her husband died, the Welsh widow remained
inconsolable. To the insurance rep who came round to settle her late
husband's policy she declared in tears, 'You know I'd give half this money
to have my Evan back again.'

Two Welshmen, Dylan and Glyn, are sitting on a park bench reading their
newspapers.

Turning to Glyn, Dylan (Dull'un) enquires, 'Just how many is a
Brazilian?'

A well spoken English gentleman sauntered into a pub in Llandrindod Wells
and drawled, 'What's the quickest way to get to Brecon from here?'

Rhodri Owen, the landlord answered, 'Are you walking or going by car?'

The Englishman answered, 'By car, of course, my man.'

David Lloyd George's amours were notorious, though curiously not at all
damaging to his career. During the Great War his daughter Megan was trying
to crash a bread queue in Wales.  'Who do you think you are?' cried the
Welsh housewives.

'I'm Lloyd George's daughter,' she said proudly, to which they all
answered, 'So are we.'

Footnote:
Lloyd George was the British prime minister
1916-22.  For those with long memories it's a case of history repeating
itself.  Lloyd George's infamous 'cash for peerages', today's 'Cash for
questions'.  In fact the song 'Lloyd George knew my father, father knew Lloyd
George' was a satirical take of the fact everybody knew someone who Lloyd
George knighted.

Q: What do call an Englishman holding a bottle of champagne after a
6 Nations game?
A: Waiter.

Welsh rugby jokes have been
moved from by here, to by there.

Within Wales, men from Cardiganshire (Cardis) are not renowned for
their generosity, munificence or open-handedness and this is why.

A Scotsman called Angus and a Cardi called Dylan met in a Glasgow bus
station, both were broke and both were thirsty.

The Scotsman had an idea for getting a free beer: 'I know a barmaid
in a pub near here who has got a very bad memory. If you get her
involved in a conversation she can't remember whether you've paid or
not.  Let me try it on first.'

Angus went into the pub, chatted to the barmaid, and duly got his
free drink.  Now it was the Cardi's turn to try.  Dylan sauntered
up to the bar, ordered his pint and began to tell the barmaid all about
life in Wales.  Ten minutes later he drained his glass and said to
the barmaid.  'Well, it's been lovely talking to you but I've got
to be off now.  What about my change?'

Footnote
Item on a standard hotel bill in
Cardiganshire : Wear and tear of mirror - 20 pence. 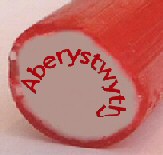 How to Spell Aberystwyth

Morgan, a youngster, was describing in an essay his holiday in
Aberystwyth, astonished and delighted his teacher by spelling the town's
name correctly every time he used it.

The next, day Miss Jones, his teacher called him to the front of the
class and said, 'Show the class how well you can spell. Write "Aberystwyth"
on the blackboard.'

Two men, Cadwaladr and Dewi shared an old two-roomed farmhouse somewhere
west of Llanfarian.  Cadwaladr grumbled to a visitor, 'Dewi makes life
unbearable at times.  He keeps sheep and goats in the bedroom and it smells
terrible.'

'Why don't you open the window?' came the reply.
'What, and let all
my pigeons escape?'

The Interesting History of 'to welsh' (note the small 'w')

Permit me to digress.  Where do you think Joe Montana comes from?
Most likely his forebears came from the American state of that name.
Pursuing this theme, the locals in Bridgend use this linguistic technique to
differentiate between Dai London, who is an Englishman from that city, and
Dai who was raised in the village of Coity.

Back to welshing; now we can visualise how this verb originates from
Englishmen who cannot pay their way; they flee from their native shires of
Hereford or Shropshire, and end up in Wales to hide from the bailiffs. They
have welshed on their debts in England.