Skip to content
Will and Guy present their lists of outstanding Olympians selected from the summer Olympic Games.  These athletes brought us immense enjoyment. 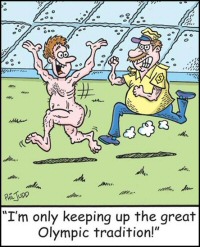 As it's notoriously difficult to compare Olympic champions from different eras, consequently, we have decided to list them in date order.

Times get faster for each generation, which makes it difficult to compare the top Olympic champions of different eras, for this reason we have decided to list our best Olympic champions in chronological order.

The 1968 Mexico City games also saw the first drug disqualification, as a Swedish entrant in the modern pentathlon, Hans-Gunnar Liljenwall, tested positive ...... for excessive alcohol. Eric 'The Eel' Moussambani 2000 Sydney. What few remember about Eric was that he actually won his 100m swimming heat.

7 Olympic Records That Will Never be Broken

Always a risky thing to say.  But Guy is willing to bet that none of these records will broken at the 2012 Olympic Games.

Here are Olympians that have achieved fame in other field.  Will and Guy acknowledge a British bias in this list.

Will and Guy's Favourite Olympic Champions

These Olympic athletes need not necessarily be the very best or the most famous, but we would just like to recognise the enjoyment each brought to us.  Again, we declare a particular interest in British Olympians.

In the 1932 Los Angeles Olympics, Mildred (Babe) Didrikson won gold medals and broke her own world records in both the javelin and the 80-meter hurdles.  In the high-jump she was awarded the silver in the high jump despite clearing a world-record height.  The judge's strange reasoning was because they disliked her technique of clearing the bar headfirst. For sheer athletic ability, Babe Didrikson may have been more versatile than Jim Thorpe.  She led the Dallas Cyclones to three AAU national basketball championships and scored 106 points in one game. After the Olympic Games Babe Didrikson pitched for the House of David men's baseball team and once struck out Joe DiMaggio. Pro basketball, billiards, handball, swimming, diving, lacrosse, football, boxing, she did them all and, as she was quick to point out, she did them better than the next person. She was good at everything, typing (86 words a minute), gin rummy, cooking, dancing, harmonica playing and crossword puzzles. 'The best way to take athletics, 'she said,' is to like them all. Athletics are all I care for.  I sleep them, eat them, talk them and try my level best to do them as they should be done.'  The first time she tried golf, without a lesson, she shot 95 for 18 holes. After three lessons, she was down to 83 and driving the ball 250 yards.  In 1934, in her first tournament, she shot 77.  She took the game so seriously that she spent 12 to 16 hours a day on weekends hitting golf balls until the blisters on her hands broke. She won 17 consecutive amateur tournaments, and when she turned professional she helped point the women's tour to its present importance. In 15 years, she won 55 amateur and pro tournaments.

Chris Brasher was an unexpected winner of the steeplechase, sprinting to a 15 metre victory.  A short time after the race it was announced that he had been disqualified for interfering with Ernst Larsen, the Norwegian runner who had finished third.  Larsen agreed that he had been bumped by Brasher but indicated that he did not support the disqualification.  Sandor Rozsynyoi of Hungary, the athlete who finished second, also supported Brasher.  After an agonising wait of three hours, Brasher's disqualification was overturned and he was reinstated as the winner. In later life Chris Brasher co-founded the London Marathon.  In earlier life Chris Brasher paced Roger Bannister to the first ever sub-minute four minute mile.

Bob Hayes won the 100m gold medal despite wearing borrowed shoes and running in a chewed-up lane 1.  In those days they drew lots for lane numbers.  His time of 10.0 equalled the world record in 1960. I liked his cavallier style of just tossing down the portable running blocks and hammering them down wherever they landed. However, it was when it came to the 100m relay that the 'Bullet' showed the world what he could really do, and why he earned the tag of the 'fastest man on the planet'. The grainy black-and-white film of the 4x100 relay shows Hayes take the baton on the last leg in about 5th place. He was at least 5m down on the French race leader.  Then the 'Bullet' unleashed what many think is still the fastest last leg ever run.  After 50 yards he had caught everyone including the Frenchman, and won pulling away by a good 3m.  Study of the film indicates that he may have run that 100m in under 8.5 seconds. Bob Hayes went on to star for the Dallas Cowboys, and is the only man to win an Olympic gold medal and a SuperBowl ring.  He was such a fast American Football wide receiver that no defensive back could catch him.  Consequently, opponents had to scheme special zone coverage schemes just to contain that blistering acceleration seen in that Olympic relay final.  As Bob also had a physical presence, that did not work too well and he set numerous receiving records, including a 95 yd touch down reception which is still the longest by a Dallas player.  In 2009 Bob Hayes was posthumously inducted into the NFL Hall of Fame.

It was wonderful news that Welshman Lyn 'The Leap' Davies won the long jump. There is a well known syndrome that teenage boys try and emulate their heroes, they pretend to score winning goals, or smash balls to the boundary.  Well this teenager - Guy Thomas, literally came down to earth with a bump.  Even with my longest run-up I could not jump from the white board actually into the sand pit!  Still, as long as Lyn the Leap soared over 8 meters and collected the gold medal - I didn't care that I could not jump 8 ft. 1. Lynn DAVIES  (GBR)   8.07m. 2. Ralph BOSTON (USA)   8.03m. 3. Igor TER-OVANESYAN  (RUS) 7.99m.

Will remembers David Coleman's commentary on BBC television on the Women's 800m final. Ann Packer [GB] was the slowest of the starters in the final and had only run the distance 5 times before in competition. A 400m runner, it was the finishing burst of speed of a sprinter around the final bend which lives in Will's memory. She moved passed the opposition as if they were standing still to win the gold medal in a world record time of 2 minutes 1.1 seconds.

Daley Thompson won gold in the Moscow and Los Angeles Decathlons. His arch rival, Jurgen Hingsen, was so much bigger it seemed unfair. Hingsen's best for the individual events was better than Thompson's yet in ten head-to-head competitions Daley Thompson won every time.  This leads Will and Guy to think that even among Olympic champions, we doubt if any were more dedicated, single minded or just plain determined to win than Daley Thompson.

Swimmer Eric 'The Eel' Moussambani became a worldwide personality. Others, notably 'Eddie the Eagle', made a name for themselves by coming last. But what few remember about Eric was that he actually won his 100m swimming heat! What happened was that his two rivals were both disqualified for a false start, leaving Eric to finish the 100m course alone.  However, this was not straightforward, at one point the life guards considered jumping in to assist the struggling Eric.  It's safe to say that his time of 1:52 will never be exceeded by the winner of an Olympic Games 100m race.  To give a comparison, all the 200m finalists were inside Eric's time for the 100m. Footnote Please send us your list of top Olympic champions.