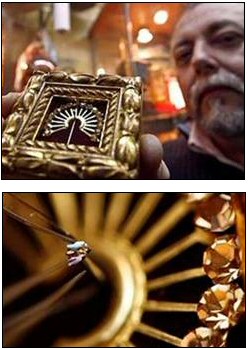 The world's smallest nativity scene with tiny hand carved figures including an angel has been created on the head of a pin by an Italian
craftsman.

Aldo Caliro sculpted the figures of the Virgin Mary, Joseph and the Angel together with a tiny baby Jesus in his crib on the top of the pin that was then mounted on a piece of velvet surrounded by a halo of diamonds that dwarf the figures, Will and Guy have learned.

Caliro then painted the figures by hand using a single sable hair from a paintbrush. Also, Caliro, a master craftsman in Italy, has now applied to enter the Guinness Book of Records.

Guy says this Chav Nativity is bound to offend some people (including me).  These are the reasons that I still went ahead and published the article:

She's not married or nuffink, but she's got this boyfriend, Joe, innit? He does joinery an' that. Mary lives with him in a crib dahn Nazaref.

One day Mary meets this bloke Gabriel. She's like 'Oo ya lookin at?' Gabriel just goes 'You got one up the duff, you have.' Mary's totally
gobsmacked. She gives it to him large 'Stop dissin' me yeah? I ain't no Kappa-slapper. I never bin wiv no one!'

So Mary goes and sees her cousin Liz, who's six months gone herself. Liz is largin' it. She's filled with spirits, Barcardi Breezers an' that.

She's like 'Orright, Mary, I can feel me bay-bee in me tummy and I reckon I'm well blessed. Think of all the extra benefits an' that we are gonna get.' Mary goes 'Yeah, s'pose you're right'

Mary an' Joe ain't got no money so they have to ponse a donkey, an' go dahn Bethlehem on that. They get to this pub an' Mary wants to stop, yeah? To have her bay-bee an' that.

But there ain't no room at the inn, innit? So Mary an' Joe break an' enter into this garridge, only it's filled wiv animals. Cahs an' sheep an' that. Then these three geezers turn up, looking proper bling, wiv crowns on their 'eads. They're like 'Respect, bay-bee Jesus', an' say they're wise men from the East End.

Joe goes: 'If you're so wise, wotchoo doin' wiv this Frankenstein an' myrrh? Why dincha just bring gold, Adidas and Burberry?' It's all about to kick off when Gabriel turns up again an' sez he's got another message from this Lord geezer.

He's like 'The police is comin an' they're killin all the bay-bees. You better nash off to Egypt.' Joe goes 'You must be monged if you
think I'm goin' dahn Egypt on a minging donkey'

Gabriel sez 'Suit yerself, pal. But it's your look out if you stay.' So they go dahn Egypt till they've stopped killin the first-born an' it's
safe an' that.

Then Joe and Mary and Jesus go back to Nazaref, an' Jesus turns water into Stella.

Snowflakes softly falling
Upon your window play,
Your blankets snug around you,
into sleep you drift away.
I bend to gently kiss you,
when I see that on the floor
There's a letter, neatly written,

I wonder who it's for.

I quietly unfold it making sure you're still asleep,
It's a Christmas list for Santa -
one my heart will always keep.
It started just as always with the toys seen on TV,
A new watch for your father and a winter coat for me.

But as my eyes read on
I could see that deep inside
There were many things you wished for that your loving heart would hide.
You asked if your friend Molly could have another dad;
It seems her father hits her and it makes you very sad.

Then you asked dear Santa
if the neighbors down the street
Could find a job, that he might have some food, and clothes, and heat.
You saw a family on the news
whose house had blown away;
'Dear Santa, send them just one thing
a place where they can stay.

And Santa, those four cookies
that I left you for a treat,
Could you take them to the children
who have nothing else to eat?
Do you know that little bear I have -
the one I love so dear?

I'm leaving it for you to take
to Africa this year.

And as you fly your reindeer
on this night of Jesus' birth,
Could your magic bring to everyone
goodwill and peace on earth?

There's one last thing before you go--
so grateful I would be--
If you'd smile at Baby Jesus in the manger by our tree.'

I pulled the letter close to me;

I felt it melt my heart.
Those tiny hands had written
what no other could impart.
'And a little child shall lead them,'
was whispered in my ear
As I watched you sleep on Christmas Eve while
Santa Claus was here.