A man walks into the street and manages to hail a taxi. He climbs into the car, and the cabbie says, 'Perfect timing. you're just like Archie.'

Cabbie: 'Archie Hobday. There's
a
guy who did everything right. Like my coming along when you needed a cab. It would have happened like that to Archie every single time.'

Passenger: 'There are always a few clouds over everybody.'

Cabbie: 'Not Archie. He was a terrific athlete. He could have won the Grand Slam at tennis. He could golf with the pros. He sang like an opera baritone and danced like a Broadway star and you should have
heard him play the piano.'

Cabbie: 'There's
more,
he had a memory like a computer. Could remember everybody's
birthday. He knew all about
wine, which foods to order and which fork to eat them with. He could fix anything. Not like me. I change a fuse, and the whole street blacks out.'

Passenger.'
Wow, some bloke then?'

Cabbie: 'He always
knew the quickest way to go in traffic and avoid traffic jams, not like me, I always seem to get stuck in them.'

Cabbie: 'And he knew how to treat a
woman and make her feel good and never answer her back even if she was in the wrong; and his clothing was always immaculate, shoes highly polished too.'

Passenger: 'An amazing fellow. How did you meet
him?'

Passenger: 'Then how do you know so much about him?'

Cabbie: 'I married his flippin'
widow.'

Rod was given the job of painting the white line down the middle of the A32 in Hampshire. On his first day he painted 5 miles, the next day 2 miles, the following day less than a mile. When the foreman
working for Fareham Borough Council asked Rod why he kept painting less each day, he replied, 'I'm not able to do any better. Each day I keep getting farther away from the paint can.'

An American tourist hailed a taxi in Mayfair, London and asked the cabbie to be
taken to Buckingham Palace.

On the way, a car zoomed by and the tourist responded, 'Oh! Cadillac -
Made in the USA! Very fast!'

Not too long afterward, another car flew by the taxi. 'Ah! Chevrolet -
Made in the US of A! Very fast!'
Yet another car zipped by, and the
tourist said, 'Buick - Made in the USA! Lightning quick!'

The taxi driver, who was 100% London Cockney, was starting to get a
little annoyed that the American made cars were passing him, when what
should happen but yet
another car passed the taxi as they were turning into Birdcage Walk. 'Oh!
Lexus - Made in the USA! Very rapid!'

The taxi driver stopped the car outside Buckingham Palace and pointing to the meter, and said, 'That'll
be £100.'
'£100? It was so short a ride! Why so much?'

The Taxi driver smiled as he replied, 'Meter - Made in England. Very fast.'

Give the Girl a 'Joe Baxi' 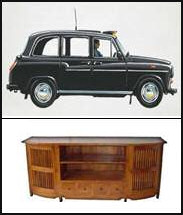 We can report that a young Londoner needed a taxi [cab] to take her from
her London home to Bristol Airport to catch her flight to go on holiday; a
distance of over 100 miles.

We have been informed that she phoned Directory Enquiries to get the
number of a taxi company. However, speaking in slang she confused the
operator totally by asking for 'a Joe Baxi.' [cockney rhyming slang for
taxi].

Having considerable difficulty understanding the teenager, the operator
told her that she could find no one of that name and received the reply, 'It
ain't a person, it's a cab, innit.'

The operator, happier now, and thinking that she fully understood what
was wanted, found her the number of her nearest cabinet shop which was in
Bishop's Stortford, Hertfordshire, and named 'Displaysense Ltd.,' and put
the girl through to a sales rep.  The 19 year old spoke to the bemused
saleswoman and seemingly getting nowhere eventually demanded, 'Look love,
how hard is it? All I want is your cheapest cab, innit. I need it for 10am.
How much is it?'

The sales adviser said it would be £180 [$356 USD] and the girl gave her
address and paid with a credit card. The next morning, an office cabinet was
delivered to her South London home.

We have learned that the young lady went ballistic when the cabinet and
not the cab arrived. Eventually everything was sorted out and Marketing
manager of 'Displaysense', Steve Whittle said, 'We thought it was a joke at
first but the girl was absolutely livid. We have suggested that maybe she
should speak a bit clearer on the phone and we have refunded her money.' 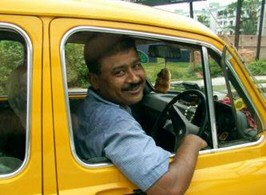 A drunken lady leapt into a taxi stark naked.  Sachin, the Indian
taxi driver made no attempt to drive off.

"What's wrong with you Luv, haven't you ever seen a naked woman before?"

"I'll not be staring at you lady, I am telling you, that would not be
proper, where I am coming from..."

"Well, if you're not bloody staring at me Luvie, what are you doing
then?"

"Well, I am looking and looking, and I am thinking and thinking to
myself, where is this lady keeping the money to be paying me with?!" 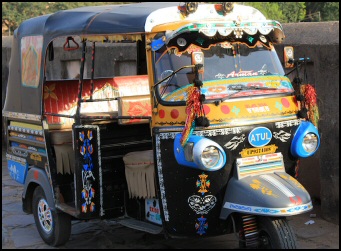 When I was in Mumbai, India recently, I saw a sign on a vehicle that
said, 'English speaking taxi driver'.

I thought to myself,
"What a wonderful idea. Why don't we have them
in London, England?"

Taxi to the Hospital

A woman flagged down a cab.

"Where to?" the cabbie asked.
"The hospital," the woman answered.

"Where at the hospital?" the cabbie asked.
"Maternity ward." the woman
answered.

A determined look crossed the cabbie's face. "Okay, I'll get you there.
Don't you worry!" He then floored it and started weaving past cars.

Bertie Evan hailed a taxi outside Paddington station in London.  The
cabbie had only gone a couple of hundred yards when Bertie leaned forward
and tapped him gently on the shoulder.  The driver screamed, mounted
the pavement, almost hitting a cyclist, then an old lady, but managed to
swerved back on to the road, only to over-correct and  glance off a
coach into the 'Historical London Souvenirs' shop window.  Incredibly,
no one was hurt.

Both the men got out of the taxi and Bertie asked the cabbie "What on
earth was that all about?" I only wanted you to stop so I could buy
souvenir!"

"I'm sorry," said the taxi driver, "but this is my first day driving a
cab; for the last twenty five years I was driving a hearse!"