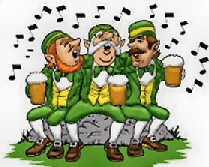 This is one race of people for whom psychoanalysis is of no use whatsoever.  Sigmund Freud (about the Irish)

Siobhan followed her husband to the public house, 'How can you come here', she said, taking a sip of his pint of Guinness, 'and drink that awful
stuff?' 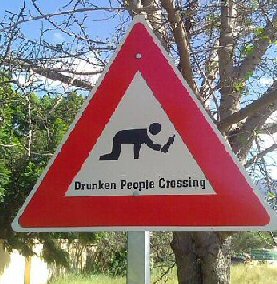 A Texan walks into a pub in Galway, Ireland and raises his voice to the crowd of drinkers. He shouts, 'I hear you Irish are a bunch of drinkin'
fools. I'll give $500 American
dollars to anybody in here who can drink 10 pints of Guinness back to back.'

The room is quiet and no one takes of the Texan's
offer.

Paddy Murphy gets up and leaves the bar. Thirty minutes later, he
shows back up and taps the Texan on the shoulder.  Is your bet still good?'
asks Paddy.

The Texan answers, 'Yes', and he orders the barman to line up 10 pints of Guinness.

Immediately, Paddy downs all
10 pints of beer, drinking them all back to back.  The other pub patrons cheer and the Texan sits down in amazement. The Texan gives the Irishman the $500 and asks, 'If ya don't
mind me askin', where did you
go for that 30 minutes you were gone?'

The local District Judge had
given the defendant a lecture on the evils of drink. But in view of the fact that this was the first time the man had been drunk and incapable, the case was dismissed on payment of twenty euros costs.

'Now
don't
let me ever see your face again, 'said the Justice sternly as the defendant turned to go.

'Because I'm the barman at
your regular pub.'

The Doctor was puzzled,  'I'm very sorry but I can't
diagnose your trouble, O'
Flaherty. I think it must be drink.'

'Don't
worry about it Dr Cullen, I'll come back when you're sober.'
said O'
Flaherty. 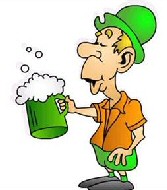 The Irish are known all over the world for their fondness for drinking
alcohol and for making some of the finest beers, stouts, ales, and whiskeys
which are famous internationally.

Will and Guy once knew of a more popular Irish drink in Ireland and
almost unknown anywhere else; it was once illegal and is known as poteen.
Illegal Irish poteen was an extremely powerful Irish drink [often 90-95% ABV]
that only the most hardened drinker in Ireland dared to drink, it was so
strong that it's known to cause blindness and sometime even kill people who
end up suffering from alcohol poisoning, which was the reason why it was
made illegal in Ireland to brew poteen.