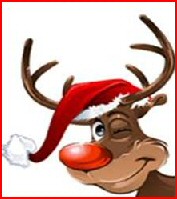 The other day I sent my girlfriend a huge pile of snow.  I rang her up and asked, 'Did you get my drift?'

2) Christmas Kiss
Romeo: What would it take to make you kiss me under the mistletoe?
Juliette: An anaesthetic.

3) Christmas Drink
A woman walks into a bar and asks for a double entendre ......
So the barman gives her one.

Packaging Notice: Potential choking hazard: do not use with food.

5) How Was Your Christmas Meal?
We had grandma for Christmas dinner.
Really?

6) Reindeer Joke
What did the reindeer say before launching into his comedy routine?
This will sleigh you.

8) Christmas Joke Pizza
Good King Wenceslas phoned
Domino's for a pizza.
The salesgirl asked him:-
'Do you want your usual?  Deep pan, crisp and even?'

9) Mike walks into a bar with a newt on his shoulder.

(Will had to explain this riddle to me.  My newt - minute)

10) Anyone who believes that men are the equal of women has never seen a man trying to wrap a Christmas present!
See more funny Christmas Jokes

What A Boy Wants For Christmas

Darren remembers accompanying his father out shopping in the toy department of Hamleys one Christmas Eve.

Dad said, 'What a marvellous train set. I'll buy it.'

The girl behind the counter looked pleased and murmured, 'Great, I'm sure your son will really love it.'

Dad replied with a glint in his eye, 'Maybe you're right. In that case I'll take two.'

What A Girl Wants For Christmas

The Santa Claus at the shopping mall was very surprised when a Emily, young lady aged about 20 years old walked up and sat on his lap.  Now, we all know that Santa doesn't usually take requests from adults, but she smiled very nicely at him, so he asked her, 'What do you want for Christmas?'

'Something for my mother, please,' replied Emily sweetly.

'Something for your mother? Well, that's very loving and thoughtful of you,' smiled Santa. 'What do would you like me to bring her?'

Without turning a hair Emily answered quickly, 'A son-in-law.'

How many ears has Captain Kirk got?
Three: the left ear, the right ear, and the final front ear.  Ben Miller

When is a boat like a pile of snow?
When it's adrift.

How do snowmen get around?
On their icicles.

What does Santa call reindeer that don't work?

What do you call the fear of getting stuck in a chimney?

a) Reindeer's Story at Christmas

Five of Our Best Christmas Jokes

According to the Alaska Department of Fish and Game, while both male and female reindeer grow antlers in the summer each year, male reindeer drop their antlers at the beginning of winter, usually late November to mid-December.

Female reindeer retain their antlers till after they give birth in the spring. Therefore, according to EVERY historical rendition depicting Santa's reindeer, EVERY single one of them, from Rudolph to Blitzen, had to be a girl.

We should have known... ONLY women would be able to drag a fat man in a red velvet suit all around the world in one night and not get lost.

Names of the other Reindeer

A little while after Alex had opened all his presents on Christmas morning, we became aware that he was looking quite
down in the mouth for no obvious reason.

'Ummmm, 'replied Alex slowly, 'I really hoped that you and Mummy would give me something for Christmas.'

On the Sunday before Christmas Reverend Billy Graham was walking down Highland street in Mt Holly, North Carolina on his way to see a parishioner. However, he wanted to post a parcel urgently so he asked a young boy where he could find the post office.  When the boy had directed him, Reverend Graham thanked him and said, 'If you'll come to the Church this evening, you can hear me telling everyone how to get to heaven.' The boy replied, 'I think I'll give your sermon a miss. If you don't even know your way to the post office, how will you lead me to heaven?' 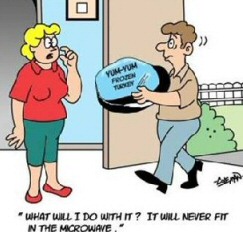 It was Christmas Eve in at the meat counter and a woman was anxiously picking over the last few remaining turkeys in the hope of finding a large one.

In desperation she called over a shop assistant and said, 'Excuse me. Do these turkeys get any bigger?'

On Christmas Eve, Nathan thought it would be nice to buy his wife a little gift for the next day. Always short of money, he thought long and hard about what that present might be'

Unable to decide, Nathan entered Debenhams and in the cosmetics section he asked the girl, 'How about some perfume?'  She showed
him a bottle costing £75. [$150USD]

The young lady returned with a smaller bottle for £50.  'Oh dear,' Nathan groused, 'still far too much.'

Growing rather annoyed at Nathan's meanness, the sales girl brought out a tiny £10 bottle and offered it to him.
Nathan became really agitated, 'What I mean', he whined, 'is I'd like to see something really cheap.'

So the sales girl handed him a mirror.

It was just before Christmas and the magistrate was in a happy mood. He asked the prisoner who was in the dock, 'What are you charged with?'

The prisoner replied, 'Doing my Christmas shopping too early.'

'That's no crime', said the magistrate. 'Just how early were you doing this shopping?'

Saying a Prayer for the Christmas Meal

Lee, A seven-year-old boy, was asked to say thanks for the Christmas dinner.  The family members bowed their heads in expectation.  Lee
began his prayer, thanking God for his Mommy, Daddy, brothers, sister, Grandma, and all his aunts and uncles. Then he began to thank God for the food.

He gave thanks for the turkey, the stuffing, the Christmas pudding, even the cranberry sauce. Then lee paused, and everyone waited ... and waited. After a long silence, the young fellow looked up at his mother and asked, "If I thank God for the Brussels sprouts, won't he know that I'm lying?"