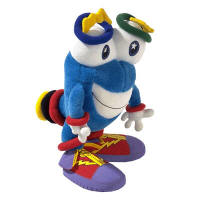 The XXVI Olympiad in Atlanta was known as the the Centennial Olympics, because the first celebration of the modern era was back in 1896.

The Atlanta Sumer Olympic Games got off to a dramatic start when the cauldron was lit by Mohammad Ali.  It was also moving when he received a replacement gold medal for the one that he lost years before.

In the second round of the middleweight (82kg) freestyle wrestling tournament, Elmadi Jabrailov of Kazakhstan faced Tucuman Jabrailov of Moldova. The two were brothers from Chechnya, but chose not to represent Russia because of its war against their homeland.  Elmadi won the high-scoring but unusually friendly encounter by 10 points to 8.

Sailor Hubert Raudaschl (AUT) became the first person ever to compete in nine Olympics.  Before he began his streak in 1964, he was a reserve in 1960.

Michael Johnson's (USA) success over both 200 and 400m was the first double in these events for a man in Olympic history.  His victory over 200m in 19.32 seconds established a new world record which, in terms of quality, came close to the 8.90m in the long jump with which Bob Beamon astonished the world in Mexico in 1968.

Naim Suleymanoglu (Turkey) became the first weightlifter in history to win three consecutive Olympic titles. 'When he eats at a restaurant, nobody asks him to pay the bill; if he breaks the speed limit, he does not get fined, and the police wish him a pleasant journey, 'wrote a Turkish journalist.

The Atlanta Olympics were marred by a bombing at the Centennial Olympic Park on July 27.  This attack killed one spectator, Alice Hawthorne, and wounded 111 others.  Eric Robert Rudolph confessed to this bombing and several others.  He is now in a US Federal prison.

Lee Lai Shan won a gold medal in sailing, the only Olympic medal that Hong Kong ever won as a British colony (1952-1997). Consequently, this is the only time that the Hong Kong flag was raised to the accompaniment of the God Save the Queen.  Sovereignty was transferred to China one year later in 1997

Sports that Should Not Be Allowed at the Olympics

Much as Will and Guy appreciates sports such as the Tour de France, and the Wimbledon tennis championships, these competitors have no place in the Olympics.  Michael Indurain and Andre Agassi are great sportsmen but they don't belong in the Olympics.

Inevitably there were cases of doping and suspected doping, for example, Michelle Smith of Ireland won three gold medals,  However, her victories were brought into question when she was handed out four-year suspension in 1998 for tampering with a urine sample.

Footnote
Please send us your interesting facts and trivia for the Atlanta 1996 Olympic games.