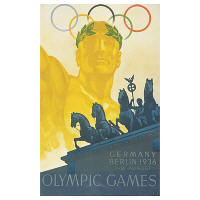 1936 saw the introduction of the torch relay, in which a lighted torch is carried from Olympia to the site of the current Games.  Basketball, canoeing and team handball made their first appearances, while polo was included in the Olympic programme for the last time.

At the 'Big Ten Track and Field Championships' of 1935, Ohio State's Jesse Owens equalled or set world records in four events: the 100 and 220-yard dashes, 200-yard low hurdles and the long jump.  He was also credited with world marks in the 200-meter run and 200-meter hurdles.  That's six world records in one afternoon, and he did it all in 45 minutes!

The following year, he swept the 100 and 200 meters and long jump at the Olympic games where he also added the 4 x 100m relay.

More of the 1936 Berlin Olympics

In Berlin, dictator Adolf Hitler and his Nazi followers felt sure that the Olympics would be the ideal venue to demonstrate Germany's oft-stated racial superiority. He directed that $25 million be spent on the finest facilities, the cleanest streets and the temporary withdrawal of all outward signs of the state-run anti-Jewish campaign. By the time over 4,000 athletes from 49 countries arrived for the Games, the stage was set.

Then Owens, a black sharecropper's son from Alabama, stole the show-winning his three individual events and adding a fourth gold medal in the 4x100-meter relay.  The fact that four other American blacks also won did little to please Herr Hitler, but the applause from the German crowds, especially for Owens, was thunderous.

New Zealander Lovelock dominated world middle-distance running in the mid-1930s. He broke the world mile record in 1933 and won the Empire Games mile gold medal the following year. Then, after a further series of exciting and well-publicised races against the world's top runners, his athletic career culminated with his dramatic 1500 metres gold medal win, in world record time, at the 1936 Berlin Olympics

Thirteen-year-old Marjorie Gestring of the United States won the gold medal in springboard diving.  She remains the youngest female gold medallist in the history of the Summer Olympics.  Inge Sorensen of Denmark earned a bronze medal in the 200-medal breaststroke at the age of 12, making her the youngest medalist ever in an individual event.

Hungarian water polo player Olivier Halassy won his third medal despite the fact that one of his legs had been amputated below the knee following a streetcar accident.  Rower Jack Beresford of Great Britain won a gold medal in the double sculls event, marking the fifth Olympics at which he earned a medal. Kristjan Palusalu of Estonia won the heavyweight division in both freestyle and Greco-Roman wrestling.

Germany won only five gold medals in men's and women's track and field, but saved face for the 'master race' in the overall medal count with an 89-56 margin over the United States.

The 1936 Olympic Games were the first to be televised.  Twenty-five large screens were set up throughout Berlin, allowing the local people to see the Games for free.

There is also the famous Leni Riefenstahl film documentary about the Berlin 1936 Olympics.

Footnote
Please send us your interesting facts and trivia for the Berlin 1936 Olympic games.