Will and Guy's Strange But True Parrot Stories

A cheating husband was exposed after his wife's parrot mimicked his voice calling out another woman's name.

Frank Ficker, 50, has now been kicked out of the family home by wife Petra, also 50, after she heard their 12-year-old parrot Hugo impersonating him on the phone to another woman.

Petra, of Freiburg, Germany, said, 'Hugo always liked to mimic Frank and he could do his voice perfectly.

'Frank asking who's at the door, Frank yelling at our nephews, Frank telling me he loved me. And then one day I heard him doing Frank's voice, but saying 'Uta, Uta'.'

She said, 'I kicked him straight out. It's just me and my parrot now.'

Wanda's dishwasher quit working so she called a repairman. Since she had to go to work the next day, she told the repairman, 'I'll leave the key under the mat. Fix the dishwasher, leave the bill on the counter, and I'll mail you a check.' 'Oh, by the way don't worry about my bulldog Spike. He won't bother you.

But, whatever you do, do NOT, under ANY circumstances, talk to my parrot!'
'I REPEAT, DO NOT TALK TO MY PARROT!!!' When the repairman arrived at Wanda's apartment the following day, he discovered the biggest, meanest looking bulldog he had ever seen.

Just as she had said, the dog just lay there on the carpet watching the repairman go about his work. The parrot, however, drove him nuts the whole time with his incessant yelling, cursing and name calling. Finally the repairman couldn't contain himself any longer and yelled:

'Shut up, you stupid, ugly bird!'
To which the parrot replied, 'Get him, Spike!'

One day David went to an auction. While he was there, he bid for a parrot. David really wanted this bird, so he got caught up and thoroughly involved in the bidding. He kept on bidding, but kept getting outbid, so he bid higher and higher and higher.

As he was paying for the parrot, he said to the auctioneer, 'I hope this parrot can talk. I would hate to have paid this much for it, only to find out that he can't talk!'

'Don't worry.' said the auctioneer, 'He can talk. Who do you think kept bidding against you?'

Footnote
I once fell into conversation with an auctioneer.  After a few beers, the auctioneer confessed that sometimes he took phantom bids 'against the wall' in order to hype up the price.

A noisy parrot that enjoys imitating sounds has helped save a man and his son from a house fire by sounding like a smoke alarm, the bird's owner reports. Shannon Conwell, 33, said he and his 9 year-old son fell asleep on the sofa while watching a film. They awoke at about 3 o'clock in the morning to find their home on fire after hearing the family's Amazon parrot, Peanut, imitating a fire alarm.

'He was really screaming his head off,' Conwell said. The smoke alarm had activated, but it was the bird's call that caught Conwell's attention. 'I grabbed my son and my bird, and got out of the house,' he said. The fire destroyed the home's dining room, kitchen and bedroom, Muncie, Indiana, USA, fire officials said. Aside from Peanut, Conwell said the fact that he and his son fell asleep on the couch helped save them. They may not have heard the alarm or the bird if they were asleep in their bedrooms.

Mr Machado said: 'I knew he wasn't going to let me down, he is a real friend and we support the same football team'.  This parrot story shows that sometimes fact is stranger than fiction.

The above funny parrot story reminds us of a case parrot-napping in in Margate, Kent, England.  Sue Parsons had an African Grey called 'Pickle'.  In January 2008 Pickle disappeared from Sue's doorstep.

Then Sue heard that a similar parrot arrived in nearby pub called the King Edward VII.  Naturally, Sue visited the pub and when she checked out the parrot, she thought it was her missing Pickle.  The face was the same (do they all look the same), however it repeated noises Sue made instantly.

The pub landlady disputes Ms Parson's claim, and refuses to hand over the parrot for DNA testing.  Will and Guy cannot help thinking they should fly in Judge Osvaldo Carlos, as he solved the Argentinian case above. 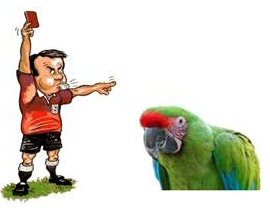 A parrot has caused chaos at a football match. The parrot, known as Me-Tu was accompanying owner Irene Kerrigan to a game between Hertfordshire Rangers and Hatfield Town, England, recently.

Will and Guy have established that the referee Gary Bailey, sent the large green parrot from the touchline because, 'Every time I blew my whistle the bird made exactly the same sound. The players all stopped so I had to ask her to move the parrot. I've never sent off a parrot before.'

As well as whistling Me-Tu also shouted "pretty boy" at the players from his cage on the sidelines.
Ms Kerrigan told us, 'He loves his football and I'll take him back down there.'

Police called out to investigate reports of a young child left home alone found a talking parrot instead. Police were called to the house in Koblenz, Germany, by an elderly lady who said she could hear a child next door constantly screaming, 'Mama, Mama'. The woman felt the child must have been left home alone as nobody was answering the cries. When officers broke into the house they found the cries were coming from a 25-year-old talking parrot. 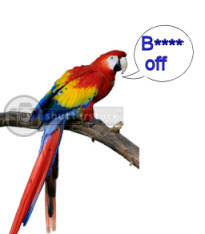 It's strange how parrots mimic children behaviour.  For example, the more that you try and stop young children swearing the more they repeat the offending words.

Geoff Grewcock, owns the Warwickshire Wildlife Sanctuary in Nuneaton, England.  He has had trouble with Barney his macaw parrot swearing.  The more Geoff has tried to stop Barney, the more he swears.

Another feature of naughty children and parrots is that the reserve their worst behaviour for your most important guests.  It may have been asking for trouble to have Barney around when the mayor came on a civic visit.  True to form, Barney swore at the Mayor, and when the vicar tried to diffuse the situation, Barney swore at him too.

Another thing that naughty children do is teach swear words to their best friends.  Again there is a parallel with parrots.  Lately, Barney has incensed his patriarch Geoff Grewcock by teaching his offensive vocabulary to Sam and Charlie who are African greys. 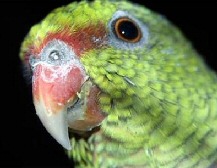 A parrot whose cries of alarm helped save the life of a choking girl in the US has been hailed a hero and awarded the Red Cross's Animal Lifesaver Award in Denver, Colorado, USA, Will and Guy have discovered.

As baby Hannah was choking on her breakfast, Willie the Parrot saw that she was turning blue so he caused a commotion by flapping his wings noisily whilst squawking, 'Mama! Baby!'

Megan Howard, Hannah's mother heard his cries and was able to save Hannah's life by applying the *Heimlich manoeuvre.

Yet another marvellous animal tale.

The nocturnal, flightless kakapo from New Zealand is one of the world's rarest birds. As well as being easy prey for rats and dogs, its mating ritual does them no favours. The male constructs a mating court on top of a mountain, excavating several shallow "bowls" connected by a series of tracks, which he keeps scrupulously clean. Every evening, he hunkers down in each of his bowls in turn, pumps up a special air sac and emits a sequence of low-frequency "booms" that can be heard three miles away.

It may take him months to attract a female, during which time he can lose half his body weight. Some females shuffle 20 miles. If both are still in the mood, they mate for 10 minutes and then she walks home again and tries not to get eaten.

Footnote:
Please write to Will and Guy if you have any funny parrot stories, or interesting facts.