Here is Will and Guy's collection of hilarious Christmas gags and witty riddles.

'Waiter - There's a Fly in My Champagne'

A multi-national company held a reception to celebrate Christmas.  The waiter gave each guest a glass of champagne, but on inspection, each guest noticed that their glass contained a fly.

Jennifer was a pretty 18 year old girl.  In the week before Christmas she sauntered up to the curtain counter, and was trying to decide which of the many types of tinsel she would buy.  Finally, she made her choice and asked the spotty youth who was manning the fabric section.  'How much is this gold tinsel garland'.

The spotty youth pointed to the Christmas mistletoe above the counter and said, 'This week we have a special offer, just one kiss per metre'.

With expectation and anticipation written all over his face, the boy measured out the tinsel, wrapped up the garland, and gave it to Jennifer.

She then called to an old man who had been browsing through the Christmas trees and said, 'My Grandpa will settle the bill.'

French parents have sought to ban a television commercial in which a father tells his adult son that Father Christmas does not exist, claiming it has traumatised their children Will and Guy have discovered.

The 20-second clip was aired last week during a commercial break on TF1, which was broadcasting the family film, "Ratatouille".

'Son, I've got some bad news for you,' says the father in the advert for Crédit Mutuel, a high street bank. 'Father Christmas doesn't exist,' he says, making a parallel with financial advisers whose prime motivation for selling products, he claims, is their commission. 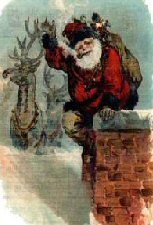 The commercial sparked outrage among parents who are calling on the advertising watchdog to ban the clip.   See more adult Christmas jokes.

The Funniest Christmas Riddles and Puns

Can You Tell If This Snowman is Lying? 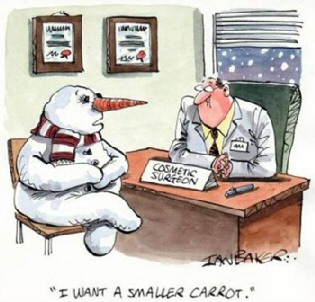 Out of the Mouths... Amusing Christmas Story

Daniel was so excited he just had to tell his parents, 'I learned in Sunday School today all about the very first Christmas. There wasn't a Santa Claus way back then, so these three blokes on camels had to deliver all the toys.  And Rudolph the Red-nosed Reindeer with his nose so bright wasn't there yet, so they had to have this big light in the sky to find their way around'. 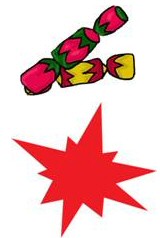 Will and Guy Suspect British Law is Crackers.  The 1875 Explosives Act, currently in force in the UK, apparently considers Christmas crackers to be covered by this archaic law.  This means that an 'explosive' cracker cannot be sold to minors.

This law was shown up to be so stupid when 22 year old student, Heather Walsh, attempted to buy a box of 10, for Christmas Day in her local Marks and Spencer's in York, England. Asked if she was over 16 years old Miss Walsh, who has an University degree was told the 'crackers were classed as explosives', Will and Guy have learned. She was told by staff that they were 'protecting me by not selling me them and they suggested that if I was left alone with the crackers I couldn't be trusted and might blow myself up.'

You couldn't make it up, and we think that this law is definitely CRACKERS.

Another Batch of Our Funniest Christmas Jokes

Why doesn't Santa suffer from claustrophobia when climbs down the chimney?
Because has had his flue jab.

What did Adam say to his girlfriend on December 24th?
'It's Christmas!  Eve.'

Mike walks into a bar with a newt on his shoulder.
The barmaid looks at the creature and asks the man what he calls it.

'Tiny', answers Mike.
'Why's that?' enquires the barmaid.
'Because he's my newt' concludes Mike.   (Will had to explain this riddle to me.  My newt - minute)

Samantha decided to go carol singing on Christmas Eve.  She knocked on the door of a house and began to sing.

A man, holding a clarinet, opened the door to the house.  In a few seconds tears were streaming down his face.

Samantha continued singing for at least a further 20 minutes.  She sang every carol she knew. At last she stopped. 'I understand,' she said softly. 'You are remembering your happy childhood Christmas days. You really are extremely sentimental.'

Charles Dickens
'I will honour Christmas in my heart, and try to keep it all the year.'

Roy L. Smith
'He who has no Christmas in his heart will never find Christmas under a tree.'

Funny Christmas Riddles.  Classic Conundrums Each and Every One

What Will and Guy find is that we cringe at 12 out of these 15 Christmas Riddles - but smile at the other 3.