Each August people are drawn to Edinburgh, Scotland like bees to a
honey pot.  They come in search of international
opera, music, drama and dance and especially comedy.

Seven of the best jokes from Edinburgh 2013.

Comedian Stewart Francis has won an award for the funniest joke of the
Edinburgh Fringe. The deadpan Canadian funny man was given the prize by
digital TV channel Dave, whose panel put a selection of their favourites to
a public vote.

He won for the joke: 'You know who really gives kids a bad name? Posh and
Becks.'

Guy and Will are unsure whether this joke is really funny. What do you
think?

Comedian Nick Helm has won an award for the best joke of the Edinburgh
Fringe. The up-and-coming funny man was given the prize by digital TV
channel Dave, whose panel put a selection of their favourites to a public
vote.

He won for the joke: "I needed a password eight characters long so I
picked Snow White and the Seven Dwarves."

The Rest of the Top Ten Festival Funnies

As our site is predominantly a comedy vehicle Will and Guy wish to
present you with the funniest jokes experienced each year at the Edinburgh
fringe.

Tim Vine with his award for the funniest joke of the Fringe.

Comedian Tim Vine has won a prize for the funniest joke of 2010 at the
Edinburgh Fringe.

The pun pundit, who won the Perrier newcomer award in 1995, was presented
with his latest prize by digital TV channel Dave. His winning one-liner was,
'I've just been on a once-in-a-lifetime holiday. I'll tell you what, never
again.'

The award was judged by eight comedy critics, whose shortlist of 24 jokes
went forward to a public vote.

The Top 10 Festival Funnies
Were Judged To Be: 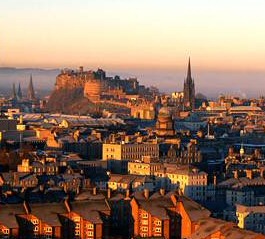 Competition organisers
Dave said each judge sat through an average of 60 performances, totalling
3,600 minutes of comedy material. They may only have skimmed the surface,
however. The Fringe website lists 883 comedy shows taking place during the
festival's month-long run.

On receiving his prize, Vine said, 'I am very
happy to win this award and I'm going to celebrate by going to Sooty's
barbecue and having a sweepsteak.'

Each summer people visit Edinburgh, Scotland, from every corner of the
globe and enjoy three exhilarating weeks of the very best in international
opera, music, drama and dance and comedy.

Performers from the Americas and the Pacific rub shoulders with artists
from Spain, Holland, Germany, Russia and the UK, creating a delicious
melting pot of entertainment.

The Edinburgh Festival, which is the largest cultural event in the world,
traces its roots to 1947 when the Edinburgh International Festival [EIF] was
established in a post-war effort to "provide a platform for the flowering of
the human spirit".

The EIF and the Fringe remain independent bodies and run separate
programmes each year. Since the Edinburgh International Festival was
organized in 1947, several other festivals have also been established in
Edinburgh. Most of these take place in late summer each year, as well. There
is, therefore, not one Edinburgh Festival, but a collection of independent
festivals which happen to take place in the same city at about the same
time.

The Worst Jokes From The Edinburgh Fringe 2010

P.S. Please write to Will and Guy if you have a good Oscar Wilde quote or a witty one-liner.