Will and Guy's Guide to Common Superstitions

Superstitions, myths, omens, and irrational beliefs certainly play a role in cultures throughout the world and here we propose to offer a few for your entertainment and enjoyment.  For ease, the topic of superstitions can be divided into three main categories: those that bring bad luck; those bringing good luck and the third type which can be called myths or folklore.

A Black Cat which crosses your path will bring bad luck. Traditionally linked with witches and Halloween they are thought, by some, to be the embodiment of evil.

Never kill a sparrow because in ancient times it was believed that they carried the souls of the dead and ending its life will bring bad luck.

Mirror: An ancient myth which our ancestors believed was that the image in a mirror is our actual soul.  A broken mirror represented the soul being astray from your body.  To break the spell of misfortune, you must wait seven hours [one for each year of bad luck] before picking up the broken pieces, and burying them outside in the moonlight.

Don't walk under a ladder. In the days before the gallows, criminals were hanged from the top rung of a ladder and their spirits were believed to linger underneath.  Common folklore has it to be bad luck if you walk beneath an open ladder, and pass through the triangle of evil ghosts and spirits.

Salt has been a valuable commodity throughout history. It would bring misfortune if salt were to be spilled.  To ward off bad luck throw a pinch over your left shoulder and all will be well. Make sure Mum is not watching!

New shoes, putting them on a table will bring bad luck.  Also, whether your wearing new shoes or old, it's bad luck to pass someone on the stairs.

One for sorrow, two for mirth,
Three for a wedding, four for a birth,
Five for silver, six for gold,
Seven for a secret not to be told.
Eight for heaven, nine for hell,
And ten for the devil's own sel'.

One for sorrow, two for joy;
Three for a girl, four for a boy;
Five for silver, six for gold;
Seven for a secret, never to be told;
Eight for a wish, nine for a kiss;
Ten for a bird that's best to miss. 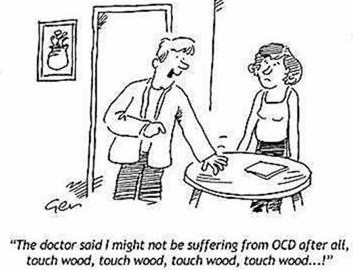 Poultry wishbones can be pulled apart by two people using only their little fingers. The winner, and the person whose wish will come true, ends up with the larger piece of bone.

Four Leaf Clover is believed to be able to protect us from evil spells The Irish, in particular, think they bring good fortune.

A Rabbit's foot will ward off bad luck and is thought to bring good. Worn as an amulet, the older the foot the better.

Horseshoes, preferable lost by the horse and found by you bring luck. However, the horseshoe, if hung up, must have the open end upwards to prevent the luck falling out. In the Middle Ages in England, a horseshoe on the door might prevent witches from entering.

Catch falling leaves in the Fall [Autumn] and you will have good luck. Every leaf caught means a lucky month in the year ahead.

Touch wood before you do something, and your wish will come true!!

A large number of dead crows were found along a highway in Canada and it was feared that an out break of Avian flu had been their demise. An Avian Pathologist examine the crows, and concluded that it was NOT Avian Flu but impact with a motor vehicle that caused the problem. He further opined that 98% of the crows had been killed by impact with trucks, and only 2% were killed by cars.

An Ornithological Behaviorist was consulted and the problem was discovered; When crows eat road kill, they always post a "look-out Crow" in a nearby location, to warn the birds in the roadway. His conclusion was that the lookout crow could not say "Truck" only "Cah."

[Kindly sent in by Pastor Fred]

Laugh Along With Will And Guy At What Our Ancestors' Believed

It's surprising how often if you do the wrong thing, you not only get into trouble, but also suffer a double whammy with a dose of bad luck.

There is an ancient Chinese story of a farmer who used an old horse to till his fields. One day, the horse escaped into the hills and when the farmer's neighbours sympathised with the old man over his bad luck, the farmer replied, 'Bad luck? Good luck?  Who knows?'

A week later, the horse returned with a herd of horses from the hills and this time the neighbours congratulated the farmer on his good luck. His reply was, 'Good luck? Bad luck? Who knows?'

Then, when the farmer's son was attempting to tame one of the wild horses, he fell off its back and broke his leg.  Everyone thought this very bad luck.  Not the farmer, whose only reaction was, 'Bad luck? Good luck? Who knows?'

Some weeks later, an army marched into the village and conscripted every able-bodied youth they found there. When they saw the farmer's son with his broken leg, they let him off. Now was that good luck or bad luck?

A plumber sent to prison on a driving charge had pleaded with Walton-on-Thames magistrates not to jail him as he was due to marry the next week.

Bad luck struck, the local newspaper reported the case thus alerting his wife that he was about to commit bigamy.

Heavily-armed troops parachuted into a Colorado prison, but they were not staging a daring rescue they had simply landed off target.  Military officials said the 25 Special Operations Command forces were on a training mission. Their target was Fremont County Airport but they ended up in a field in the grounds of Fremont Correctional Facility instead.

Thankfully, armed prison guards were able to identify the incomers as soldiers and held their fire, but the defence department refused to say exactly who they were. 'We don't know who they were and I'm not sure we'll ever know who they were,' said the Colorado Department of Corrections. 'Everyone acted appropriately.'

From the parachutists' point of view it could have been worse! 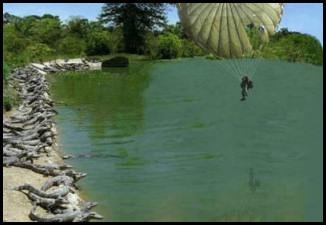 Police in America have arrested a man who robbed a bank 'disguised' as a tree. CCTV footage shows the man entering the bank with branches and leaves taped to his body. 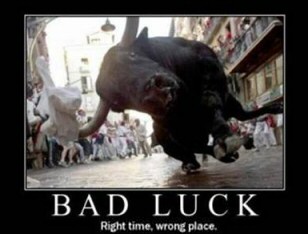 After patiently waiting in the queue with fellow customers, the man made his move, ordering the bank cashier to fill a bag full of cash, Sky News reports. Unfortunately for the suspect, a dye pack inside the bag exploded. Also in a second stroke of bad luck, the man's face could be clearly seen by the CCTV camera through his foliage. He was later arrested at his home in Manchester, New Hampshire, USA.  See more bad luck stories

An accountant in Salem, Pennsylvania, has been charged with 'defiant trespass', which carries a two-year prison sentence.  His alleged crime? He spoke at a public meeting, objecting to a new sewage disposal plan, for 11 minutes instead of the allotted five.

A woman's husband had been slipping in and out of a coma for several months, yet she had stayed by his bedside every day.

'What dear?' she gently asked.

A farmer in Iowa has bred cows which are less than three feet tall.  He is selling them as pets at $1,000 each.