When is Valentine's Day?

The history of St Valentine's day goes back to Roman times.  The emperor Claudius II was a student of human nature way back in AD 287, indeed he calculated that single men made braver Roman soldiers than married men.  Therefore, as Claudius had absolute power, he dictated than no soldier should get wed.  However, a Roman called Valentinus thought that this was rough justice and secretly married soldiers who had a sweetheart.

When Claudius discovered that Valentinus had defied his law he threw Valentinus into jail.  Whilst in jail, Valentinus fell in love with his gaoler's daughter and sent her the first ever card - from Valentine!

Later on, in AD 496 Pope Gelasius, chose February 14th as the day to remember St Valentine.  Unfortunately, tantalisingly little is known about these early origins of St Valentine.

In the history of St Valentine's day, it is the 17th century which was the most romantic era.  The 14th of February became a day to exchange love notes by sending poems and gifts.  Also dances and small festivals were held at this time.

In modern times, 1416, Charles, Duke of Orleans, sent one of the earliest Valentines, from his imprisonment in the Tower of London after the Battle of Agincourt.  He sent several Valentine poems to his wife in France.

Britain's Roman Catholic Church is advising lovelorn singles to direct their 14 February requests for love to St Raphael, rather than St Valentine.  Over the years St Valentine has come incorrectly to be associated with finding love, the Church says.  He is the patron saint for those who have already found their soul mate.  St Raphael is the patron saint for happy encounters and it is to him those fearing the Valentine's post should properly direct their prayers.

In Guy's home country of Wales wooden love spoons are made and given as presents on 14 February. Hearts, keys and keyholes feature as decorations on these carved spoons as and invitation to 'unlock my heart'.

Valentines day history in Medieval times saw the youth of the time wearing names drawn from a hat on their sleeves. Hence the modern expression 'to wear your heart on your sleeve' . This means that other people can easily see what you are feeling.

If a young lady sees a sparrow on February 14th flying overhead it means that she will marry a poor man and be extremely happy. If she saw a robin she would marry a mariner. A goldfinch seen by a woman meant that she would marry into riches.

St Valentine's commercialisation probably began with the making and selling of cards in the 18th century.  Women in the 18th century would write men's names on paper, roll them in clay and place them in a bowl of water. The first paper to rise to the surface would contain the name of a woman's true love. 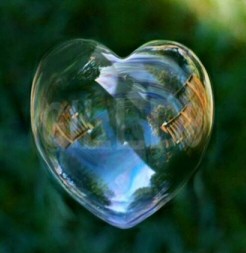 Footnote:
Please send us your pictures for Tuesday 14th February 2012