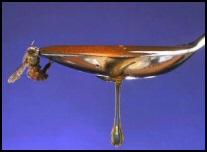 How does the queen get around her hive?
She's throne.

Sniffer bees have been trained to detect bombs. 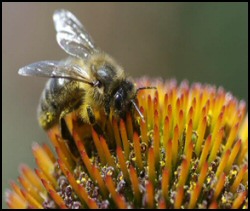 Sounds improbable but it's true.  Scientists have discovered that bees can be trained to detect scents far more quickly (and cheaply) than dogs.

The bees are exposed to a particular smell and given a sugar reward. By repeating this process five or six times the bee always associates that smell with food so it sticks its proboscis (or tongue) out to receive it.

Trained bees are placed inside a hand-held detector. When they recognise a particular scent, like explosives or cocaine, they stick out their tongues and this response is recorded by computer software so the human handler can identify the source instantly.

The potential of bees is enormous. It may not be long before sniffer bees are a more familiar sight than sniffer dogs.

DARPA, America's sci-fi Defence Advanced Research Projects Agency, has a billion dollar a year budget and sponsors 'off-the-wall' ideas like bee bomb detectors that could prove winners in the fight against terrorists.

How Not to Get Rid of a Bee Hive 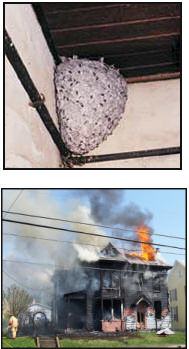 Mr Joshua Mullen from Mobile, Alabama, USA is this month's candidate for 'Loser of the Month'. Finding that his shed had a nest of bees living in it you will find it hard to believe how he attempted to get rid of them.

Mr Mullen soaked some towels in gasoline [petrol] and placed them carefully in the shed in order to remove the bees. However, the shed erupted in flames with a loud 'whoosh'. It appears that the fire started when the pilot light of a hot-water heater in the shed ignited fumes from the petrol.

The picture to the right is not of the actual blaze in Mobile:
The fire caused some $80,000 worth of damage but luckily nobody was hurt in the conflagration. We have heard that Mr Mullen told reporters, 'Looking at all this, there might have been a better way. It was a mistake. I wish I hadn't done it, but I did.'

More people die in the USA each year from bee and wasp stings than from snake bites.

A young man starts a new job at the zoo and is given three tasks.

First he has to clean out the tropical fish tank. As he does this, a piranha jumps out and bites him. In a panic, he beats it to death with a spade. Realising his employer will be cross with him, he disposes of the fish by feeding it to the lions, because lions eat anything.

On his second job of cleaning out the primate house, he is attacked by two aggressive chimpanzees, who pelt him with coconuts. He swipes wildly at the two chimps with his spade, killing them both. What can he do? Feed them to the lions, of course, because lions eat anything.

Finally he has to collect honey from the South American bees. As soon as he starts, he is attacked by an angry swarm. He grabs the spade and smashes several of them to a pulp. He throws them into the lion enclosure, because lions eat anything.
Later that day a new lion arrives at the zoo. He wanders up to an old lion and asks, "What's the food like here?"

The old lion replies: "Absolutely brilliant. Today we had fish and chimps with mushy bees."

Will and Guy's Collection of Silly Bee Jokes 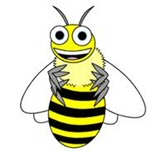 A man was driving down the road and ran out of gas. Just at that moment, a bee flew in his window. The bee said, "What seems to be the problem?" "I'm out of gas," the man replied.

The bee told the man to wait right there and flew away. Minutes later, the man watched as an entire swarm of bees flew to his car and into his gas tank. After a few minutes, the bees flew out. "Try it now," said one bee.

The man turned the ignition key and the car started right up. "Wow!" the man exclaimed, "What did you put in my gas tank"? The bee answered: