Funny stories and clean jokes about nuns and priests.

Two Priests Decided to Go to Hawaii on Vacation 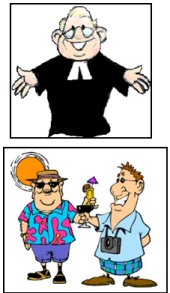 Two priests were determined to make this a real vacation by not wearing anything that would identify them as clergy. As soon as the plane landed they headed for a store and bought some really outrageous shorts, shirts, sandals, sunglasses, etc.

The next morning they went to the beach dressed in their 'tourist' garb. They were sitting on beach chairs, enjoying a drink, the sunshine and the scenery when a 'drop dead gorgeous' topless blonde came walking straight towards them ...... They couldn't help but stare.

As the blonde passed them she smiled and said 'Good Morning, Father ~ Good Morning, Father,' nodding and addressing each of them individually, then she passed on by. They were both stunned. How in the world did she know they were priests?  So the next day, they went back to the store and bought even more outrageous outfits.

Once again, in their new attire, they settled down in their chairs to enjoy the sunshine. After a little while, the same gorgeous topless blonde came walking toward them.

One of the priests couldn't stand it any longer and said, 'Just a minute, young lady.' 'Yes, Father?'

'We are priests and proud of it, but I have to know, how in the world did you know we are priests, dressed as we are?' 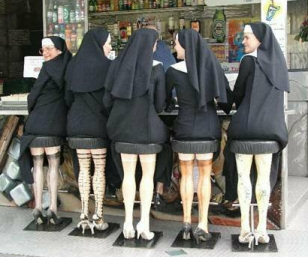 Sisters Mary Catherine, Maria Theresa, Katherine Marie, Rose Frances, & Mary Kathleen left the Convent on a trip to St. Patrick's Cathedral in New York City and were sight-seeing on a Tuesday in July. It was hot and humid in town and their traditional garb was making them so uncomfortable, they decided to stop in at Patty McGuire's Pub for a cold soft drink.

Patty had recently added special legs to his barstools, which were the talk of the fashionable eastside neighborhood. All 5 Nuns sat up at the bar and were enjoying their Cokes when Monsignor Riley and Father McGinty entered the bar through the front door.

They, too, came for a cold drink when they were shocked and almost fainted at what they saw:-

** At first Guy was a bit slow on the uptake.  To tell the truth, I was in danger of dismissing the story as poor, until I looked at the source - Hannah Baker.  Then I thought, hmm... if Hannah sent it, this must be good, so I re-read the story, studied the picture, especially the nun's habits, and I smiled. Smart Women.

John, the vicar of St Mary's was enthused to raise money for his cathedral's roof. He felt the usual tombola would not make enough money so he decided to run a series of donkey Derbies throughout the diocese.

The Reverend John learned that Big Al Corleone had a string of donkeys, and persuaded him to loan his donkeys for a series of Derbies. Crucially, John induced Big Al to run the best donkey in the Vicar's name.

It the first Derby, held in the grounds of St Mark's church, John's donkey came second.

The next day the local chronicle carried this headline: "Vicar's Ass Shows."

Two weeks later the next donkey derby was run in St Gabriel's parish. John was thrilled when his donkey won!

Problem: the bishop was so upset with the publicity generated by the Chronicle that he ordered the Vicar not to enter the donkey in another race.

Understandably, the bishop was exasperated and he ordered John to sever his association with the donkey Derby. Consequently, the Vicar decided to give the donkey to a nun in a St Cecilia's convent.

The local paper, hearing the news, posted this headline: "Nun Has Best Ass in Town."

When he read that headline the bishop fainted.  Later, when he had recovered, the bishop summoned the nun and asked her to get rid of the donkey, so she sold it to a farmer for twenty dollars.

Finally the bishop ordered the nun to buy back the donkey and to release it onto the plains where it could return to nature.

The next day the headlines read: "Nun Announces that Her Ass is Wild and Free".

The bishop was buried the next day.

The Funny Story of the Taxi Driver and St Christopher

A priest and a taxi driver both died and went to heaven. St Christopher was at the Pearly gates waiting for them.

St Christopher and the Taxi Driver

The taxi driver did as he was told and followed St Christopher to a mansion. It had everything you could imagine from a bowling alley to an Olympic size pool.

Next, St Christopher led the priest to a rough old shack with a bunk bed and a little old television set.

'Wait, I think you are a little mixed up,' said the priest. 'Shouldn't I be the one who gets the mansion? After all I was a priest, went to church every day, and preached God's word.'

'Yes, that's true.' St Christopher rejoined, 'But during your sermons people slept. When the taxi driver drove, everyone prayed.'

A man flops down on a subway seat next to a priest. The man's tie is stained, his face is smeared with red lipstick, and a half-empty bottle of gin is sticking out of his torn coat pocket. He opens a newspaper and begins reading.

After a few minutes the guy turns to the priest and asks, 'Say, Father, what causes arthritis?' Loose living; cheap, wicked woman; too much alcohol; and contempt for your fellow man, 'answers the priest.' I'll be damned, 'the drunk mutters, returning to his paper.

The priest, thinking about what he said, nudges the man and apologises.' I'm very sorry. I didn't mean to be so harsh. How long have you had arthritis?'

'Oh, I don't have it, Father. But it says here that the Pope does.'

Acting on a tip-off, Greek police officers raided a nunnery in the village of Filiro, near Thessaloniki in Greece. It amazed them to find 35 healthy cannabis plants growing in the walled garden.

What the nuns told the police was, two gentleman offered to help them tidy the garden in the Greek Orthodox nunnery. Summing up the circumstances, the officers believed the nuns when they said they had no idea that 'decorative plants' were really pot, or k├ínnabis in Greek. Police are still trying to trace the two gardeners.

Footnote:
Please send us your priests and nuns' jokes and funny pictures.