If money doesn't grow on trees, then why do banks have branches?

Funny Did You Know Facts - If's
and Buts

Have You Tested the Latest
Gadget - Intelligent Paper Memo

British technology company in Cambridge, England has invented an intelligent
paper memo post-it note.  It's key feature is a built-in alarm clock that
can be programmed to flash or beep. 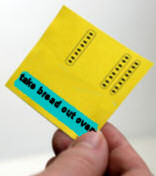 It's called the Ixp-Note and it's just 1mm thick.  A secret process uses
thermo-chromic ink to display a digital clock readout on paper.  It was
invented by Lyndsay Williams, in the Girton Labs,  her idea is that people
can place them at strategic places around the house with reminders such as 'take
the bread out of the oven', or 'time for my vitamin pill.  Look out for the
post-it notes in 2009, they should be about $20 for a pack of ten.

Did You Appreciate The Truth About
Letters?

In addition, letters 'a', 'b' and 'c' do not appear anywhere in the spellings
of 1 to 999
[Strange, but true, letter 'a' comes for the first time in Thousand]

Letter 'c' does not appear anywhere in the spellings of entire English
counting.

More: Funny Did You Know
Facts?

Did You Realize That...

Five Fascinating 'Did You
Know This Facts'

* This fact may well get children thinking, our reader says it originally
featured on the BBC website.  It certainly has a few adult debating the
merits of this 'fact'.  For example, is there a typo, should it read
not 'speed of light', but 'speed of sound'.  No!

Next comes the question how long
are these scissors.  The answer is exceedingly long, in fact one light year
long, this is how the blades get to exceed the speed of light when the
scissors close - theoretically.
Finally, can anything move faster than the speed of light?  Not if
Einstein is right.

Five Further Fascinating  Did You Know This ....

One more for luck: Apparently, we're told that 35% of the people who use
personal ads for dating are already married.

Footnote:
Please send us your 'Funny Did You Know Facts'

See more truisms, can you believe?  And did you
know facts