Skip to content
Argentina 3 : 2 West Germany France  1 : 1 Brazil (4-3 Penalties) Will Says : 1986, in Mexico, saw one of the greatest games ever in the Finals. This took place in Guadalajara in the quarter-finals between Brazil and France. 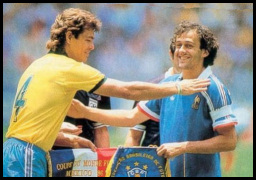 Both teams showed flair, skill and attacking verve. Michel Platini exhibited the talent which had made him one of the best players in the world at the time. Jo�l Bats, the French goalkeeper made some marvellous saves, including saving a Zico penalty. Although 1-1 at full time the game had been exciting. Will has rarely enjoyed a game so much. France won the penalty shoot out 4-3 to progress to the semis where they lost to a fresh, fit and organised Germany. Guy's says One of my abiding memories of the Argentinian games was the silver foil ticker tape that created the team and lingered on the pitch throughout the game. A variety of good, clean and free football (soccer) jokes.  Funny sportsman's nicknames.  Amusing short stories.  Anecdotes and tales about football.  Will and Guy hope that you share our joy of sporting funnies.