Will's Story About a Wheelbarrow Theft

Here's a story set just after the second world (1939-45) war at Portsmouth dockyard. One day Ministry of Defence policeman [Mod plod] stopped a worker who was walking out of the dockyard gates pushing a wheelbarrow with a suspicious looking package in it. The Mod plod opened the package and found it contained nothing but some old bits of rubbish, sawdust and floor-sweepings. The next day he stopped the same worker who was again pushing a wheelbarrow containing a suspicious looking package. Once more it contained nothing of any value. The same thing happened several days on the trot, until the policeman finally said, 'OK, I give up. I know you are up to something, but I just can't tell what. Please, I promise not to arrest you, but put me out of my misery; tell me what you are stealing.' 'Wheelbarrows, 'smiled the worker, 'I'm stealing wheelbarrows.'

Wheelbarrow Thefts from the 1950s

Will and Guy wonder if this wheelbarrow scam is a British affair, because Michael Wilkinson writes: My Father told me about the wheelbarrow thefts back in the late 1950s whilst he was a submariner based in Portsmouth dockyard. It started during WW2 In those days horses were used a lot to haul carts around and the wheelbarrow liberator used to collect the horse droppings and take them off site in a wheelbarrow. After a few searches the "ModPlod" got used to him and he continued to take wheelbarrows for quite sometime. The theft was only discovered on his retirement. At least that was the way my Dad told it.

Wheelbarrow Thefts in the 1960s

I just thought that you might like to know that the wheelbarrow theft happened at the company Short Brothers and Harland, in Belfast, in 1961. My father, who was a researcher there in the missiles division, was present, by chance, on the day the man was stopped and challenged.  It was the security man on the gate who suddenly realised that he had always seen the galvanised wheelbarrows going out of and never back into the yard. The 'Fred' man (in Will's story) was called Howard. Amazingly he was not dismissed, but was put on a job where he was watched all the time. He also had wages stopped to pay back the estimated 60 wheelbarrows' value. Howard had worked for the company for 13 years, but had only in the past 12 or so months started stealing property.  No one ever know why he had become dishonest. Best wishes, Pam See more on variations of these wheelbarrow theft stories.

Funny how one story reminds you of another.  I had a job computer training at one of Ford's factories.  Theft was a continual problem.

At the end of one day old Fred passed the security booth, gave a cheery wave, then fell over in an apoplectic fit.  Worried, the security guard rushed over to the stricken man and tried to give him heart massage.  Perplexed, the guard could not get anywhere near Fred's heart because ten inner tubes were restricting access. Fred was stealing the tubes by wearing them around his trunk.  A quick and delicate job with his Suisse army knife  soon had Fred breathing normally.  In no time Fred was on his feet and having a quiet word with the factory manager about inner tubes shortages. 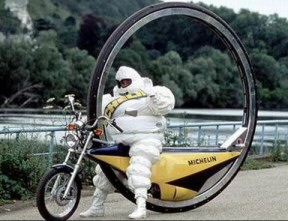 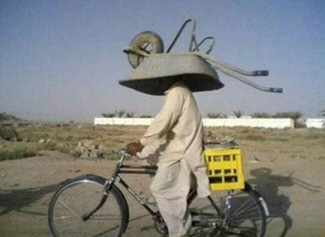