Wesak [Vesak] is the most important of the Buddhist festivals and is
celebrated on the full moon in May write Will and Guy. It celebrates the
Buddha's birthday, and, for some Buddhists, also marks his enlightenment and
death.

Buddha literally means "one who is awake" and has become enlightened. It
is a term that denotes a person who has attained the supreme wisdom and
compassion of Enlightenment. To Buddhists Enlightenment is a blessed state
in which the individual attains Nirvana: the transcendence of desire and
suffering.

It is celebrated in the following countries: Malaysia, Singapore,
Indonesia, Hong Kong, Thailand, Cambodia, Taiwan, Korea, Vietnam, Japan,
Nepal, Sri Lanka, Pakistan, and India - in fact, anywhere there are
Buddhists. In recent year celebrations have occurred in the West.

Buddha, Siddhartha Gautama, was a spiritual teacher who founded Buddhism.
He was born as Hindu Prince Siddhartha, son of the king of the Sakya people
whose kingdom was situated on the borders of present-day Nepal and India.
Born around 565 BC, Buddha died around 483 BC.

Vesak Day Around The World 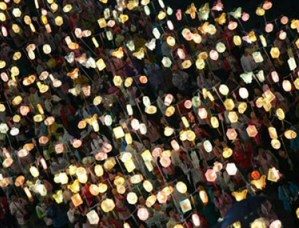 Vesak Day is often referred to with other names in each country.

In Mahayana Buddhist traditions, the holiday is known by its Sanskrit
name, वैशाख Vaiśākha, and derived variants of it. Vesākha is known as Vesak
or Wesak (衛塞節) in the Sinhalese language.

Wesak is also known as

The Lotus is Important in Buddhism 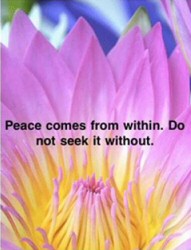 It symbolises enlightenment because the lotus blossoms on a dirty pool.
In addition, the Lotus symbolises the passage from darkness to light, the
passage from ignorance to wisdom.

Examples from Will and Guy of Wesak Celebrations Worldwide

In Thailand, where majority of the population are Buddhists, each year
the nationwide festival of Vesak Day is held to pay tribute to the birth,
enlightenment and death of Buddha. The Vesak Day will fall on Tuesday, May
17th 2011, however celebrations will be seen for more than a week.

Sakuntra, a friend of Will's from Thailand who now lives in Portsmouth,
England, told him the occasion is known, in her country as Vaisakha.

In Thailand, people will congregate around Buddhist temples to pray and
give thanks to the deity on Wesak Day.

Monks dressed in their saffron robes will lead sermons and services
throughout the day, with candlelit processions often taking place once night
has fallen.

In Singapore vast crowds usually assemble at various Buddhist temples
around the city. Inside the Buddha temples the monks chant sacred hymns and
a large number of devotees set caged-birds free. Setting the imprisoned
birds free is considered as a graceful gesture which serves as a mark of
respect to all living creatures in the world.

During the evenings, candlelit processions are found walking across the
streets of Singapore and this is how the festival is ended.

In Sri Lanka the Wesak Festival is celebrated as a religious and a
cultural festival.

During these two days, the selling of alcohol and flesh is prohibited by
government decree. As a symbolic act of liberation, birds, insects and
animals are released in huge numbers. Will remembers seeing this when he
lived in Sri Lanka as a child.

In addition, colourful lanterns called Vesak koodu are hung along streets
and in front of homes. They signify the light of the Buddha, Dharma and the
Sangha.

Many devout Buddhists wear simple white dresses on Vesak Day and spend
the whole day in temples with renewed determination to observe the
observance of the "Eight Precepts of Buddhism." 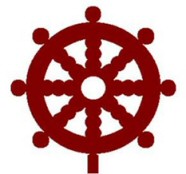 Vesak is considered to be the most holy of days and thousands of Buddhist
monks and their followers meditate for the occasion of Vesak at Borubudur
temple and Mendut temple.

Candlelight processions, so popular in Asia, may also occur.

Theravada monks of Indonesia observe Vesak by meditating in the ancient
Borobodur Temple complex. Once one of the dominant religions of Indonesia, today only about 1% of
the people of Indonesia are Buddhists.

In India, Vesak Day is known as Buddha Purnima.

On this day, Buddhists do not eat meat. This is considered an act of
compassion towards animals.

People are encouraged to perform other acts of kindness such as sharing
food with the poor. Some people even set up road stalls providing free,
clean drinking water.

In Japan, the general populace are not practicing Buddhists (and may be
called casual Buddhists), so most Buddhist temples provide a way to allow
the general public to celebrate and participate in only the aspect of the
day being Buddha's birthday, providing the statue of baby Buddha and
allowing the populace to worship or pay respect by pouring ama cha, a tea
made of Hydrangea.

In Buddhist temples, monasteries and nunneries, more involved ceremonies
are conducted for practicing Buddhists, priests, monks and nuns. Also, there
are public festivals day in some areas.

The birth of the Buddha is often celebrated by Buddhists in Nepal for an
entire month in the Buddhist calendar. The actual day is called Buddha
Poornima (or Buddha Purnima), also traditionally known as Vaishakh Poornima.
It is celebrated quietly with the gentleness associated with being a
Buddhist.

As Wesak day progresses, Buddhist devotees visit orphanages, welfare
homes, homes for the aged and charitable institutions to distribute cash
donations and gifts to the needy.

On this occasion, caged birds are freed to symbolize humanity and
compassion.

The celebration is also marked with the devotees performing the "bathing
Buddha" ritual where they held a wooden ladle and poured water over a small
statue of the Buddha. Bathing a statue of the Buddha symbolizes a fresh
start in life and the care given to newborn babies.

Wesak day celebrations begins much before the dawn when the Malaysian
Buddhist devotees gather in Buddhist temples for worship all over Malaysia.
The Buddhists will then hoist the Buddhist flag and sing hymns in praise of
the holy triple gem namely:The Buddha, The Dharma (his teachings) and The
Sangha (his disciples). The celebration is done with prayers, chants,
offerings and giving alms. Simple offerings are also brought to the temple
such as flowers while prayers using candles and joss-sticks.

The Buddhist eat a vegetarian diet prior to the festival in order to
cleanse and purify themselves.

Animals such as doves and tortoises are released by the Malaysian
Buddhist devotees on the Wesak Day as a symbolic gesture of releasing the
soul and giving up the past sins. Besides that, this particular act is also
seen as a way of giving freedom for those that are held against their will
or being tortured.

Free meals are also given to the needy on the Wesak Day.

Lotus lanterns cover temples throughout the month of May . Streets, as
shown here, are also lined with lanterns.

On the day of Buddha's birth, many temples provide free meals and tea to
all visitors; sometimes breakfast and lunch may be provided.

Five Thought-Provoking Quotations by The Buddha

Footnote
Please send us your interesting facts
and stories about Wesak Day festivals.