Here are three of the better 'Men Jokes'.  In many ways these men jokes are the mirror image of the
blonde jokes.  Stereotyping, yes, fun, indeed; do they offend me as a man, definitely not. 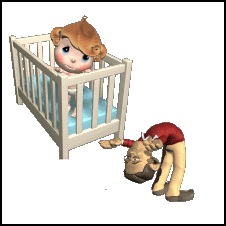 One Monday evening a Jessica found her husband Mike with his head cocked looking at their baby's
cot. Silently she watched him. As Mike twisted and turned looking at at their infant, Jessica could see on Mike's
face a mixture of
emotions: disbelief, doubt, joy, surprise, enchantment and scepticism.

Mike did not usually show his emotions and his unusual display brought tears to her eyes.  Jessica put her her arm around her husband
and asked. 'A
penny for your thoughts.'

A Welsh lad came home from school and told his mother he had been given a part in the school play.

'Wonderful, 'replies his mother, 'what part is it?'

The boy says, 'I play the part of the Welsh
husband.'

The mother scowls and says, 'Go back and tell your teacher you want a speaking part.'

Footnote
As a Welsh husband myself, I can vouch for the truth of the above scenario.

Trivial Fact:
The Welsh version of Scrabble has no Q or X, instead it has lot of Ll (double L) tiles.

Example of a Welsh Phrase:
Ble
rwyt ti yn mynd?   Translation: Where are you going?   ..... to another of Will and Guy's Jokes?

3) Simple
Really. [Based on a true story]

During the Gulf War, Barney Arkwright was assigned to go to Saudi Arabia. As he was saying good-bye to his family, his three-year-old son, Simon, was holding on to Barney's leg and pleading with him not to
leave. 'No, Daddy, please don't go!' Simon kept repeating.

They were beginning to make a scene when Hazel, Barney's wife, desperate to calm her son, said, 'Let Daddy go and I'll take you to get a
pizza, Simon.'

Immediately, Simon loosened his tight grip, stepped back and in a calm voice said, 'Bye, Daddy.'