Here is our collection of amusing Welsh jokes, stories and wit.

Ever since Anthony Hopkins and Catherine Zeta-Jones became established in Hollywood, the Welsh film industry is to receive
additional funding to step up production.  News sent in by Mike James.

Hollywood are going to remake many well known films, but this time with a Welsh flavour. The following are planned for release next year:

Everybody tells jokes, but we still need comedians.
Jimmy Wales 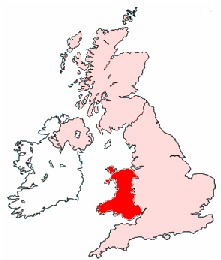 A family of 6 have been found frozen to death outside the Cardiff Odeon in
Queens Street.  It seems that they had been queuing for two days hoping to
see "Closed for the winter"

Please contact the Welsh Assembly for actual dates of release and for
literal translations where needed. 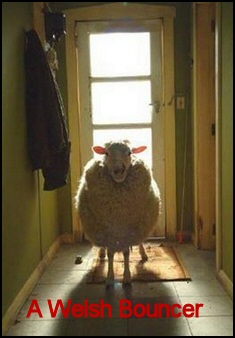 Concern of Dialects is growing.  Basically people want to preserve them.
Here are three arbitrary concerns.  In the United
Kingdom Cornish has died out as a spoken language.  There are proposals to teach the Norfolk dialect in Schools.  The Scots bemoan the loss of many of their idiosyncrasies.

Even standard English
has huge potential for puns, jokes and play's
upon words.   However when you add dialects the fun multiplies.  The danger is that people will be offended, so to show we have no malice, I will
start with poking fun at my fellow countrymen - the Welsh.

If you listen to the Welsh language, then you realise it's
a sing song and lyrical language, unafraid to add extra words, and this explains some of the idiosyncrasies when Welshmen and Welsh women speak
English.

The Welsh have a strange use of the verb 'do'.  It is gratuitously inserted into sentences.  For example; He do go to the chapel.

The best translation of 'do' in the above sentence is 'went'

meaning the past tense, however the
charm of this simple verb 'do', is that it could equally well mean the future tense.  A further point any Welshman speaking this sentence would drop the first haich.  So they would say: 'e do go to the chapel on
Sunday.  This could mean that he went last Sunday, or will be going next Sunday.

By here or by there

It is inexplicable why Welshmen make such great use of the proposition
'by'.
I once heard a woman say to a child.'
Come from by there to by here - or I'll take you home lost'.

Another Example of Welsh Speak

The above sign was posted outside the new Merthyr Town Hall to be opened
by the Prince of Wales.

A visitor to Newquay, a Cardigan seaside resort, asked the shopkeeper:
"Please can I have a toothbrush". The shopkeeper replied, "I'm sorry, but our summer
novelties haven't come in yet."

A Scotsman called Angus and a Cardi called Dylan met in a Glasgow bus
station, both were broke and both were thirsty.

The Scotsman had an idea for getting a free beer: 'I know a barmaid
in a pub near here who has got a very bad memory.  If you get her
involved in a conversation she can't remember whether you've paid or
not.  Let me try it on first.'

Angus went into the pub, chatted to the barmaid, and duly got his
free drink.  Now it was the Cardi's turn to try.  Dylan sauntered
up to the bar, ordered his pint and began to tell the barmaid all about
life in Wales.  Ten minutes later he drained his glass and said to
the barmaid.  'Well, it's been lovely talking to you but I've got
to be off now.  What about my change?'

Footnote
Item on a standard hotel bill in
Cardiganshire : Wear and tear of mirror - 20 pence.

Two Definitions of a Welsh Cardi: 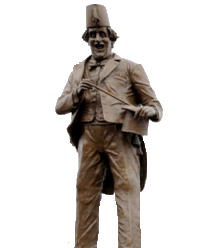 In addition to the actors Anthony Hopkins and Katherine Zeta Jones, Wales
has a fine collection of comedians.

The Road to Perdition

The Reverend Huw Jones, a Minister from Wales, was travelling home one
night and was greatly annoyed when a young man, much the worse for drink,
came and sat next to him on the bus.

'Young man,' the Minister, declared in a rather pompous tone, 'do
you not realise you are on the road to perdition?'

'Oh, hell and botheration', retorted the drunkard, 'I could have sworn
this bus went to Llanelli.'

I just met the Reverend Lewis at the Pontypool post office, he was buying
stamps for his Christmas cards. I overheard him saying to Gladys the post
mistress, "I would like 50 of your Christmas stamps, please."

"Dew, dew" The Reverend exclaimed, "What has the world come to. OK,
please give me 6 Wesleyan, 15 Presbyterian, 28 Lutheran, and 1 Galvanised
for that Calvinist Methodist in Newquay." 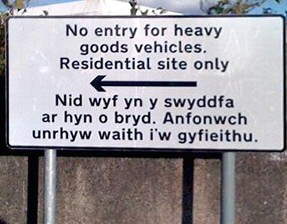 English
No entry for heavy goods vehicles.
Residential site only.

Welsh Translation
I am out of the office at the moment.

How the Message Got Lost in Translation

The council staff in Swansea, Wales, UK needed a
translation, so they emailed a translator.  Unfortunately, he was not
available, instead the email triggered an automatic response, which read in Welsh:

I am out of the office at the moment

Sadly the council staff were not Welsh speaking, and believed that the
automatic response was the actual translation of the message.

Gareth James, a Welshman, was shipwrecked and managed to survive, he was
marooned on a desert island.  A passing ship picked him up some seven
years later and the crew were amazed to find his little island covered in
fine buildings that Gareth had constructed all by himself.

With pride Gareth took the Captain round the island and pointed out to
him his house, workshop, electricity generator and two chapels.

'But what do you need the second chapel for?' demanded the perplexed
captain.

'Come on, boyo,' smiled Gareth impishly, 'that's the chapel I don't go
to.'

George, an English visitor to the small Welsh town of Aberaeron,
Cardiganshire, was approached by one of the deacons of the local chapel who
asked him whether he would like to attend their chapel on the following
Sunday.

'Wouldn't that be a little pointless?' replied George politely, 'After
all, your services are held in Welsh and I don't understand the language.'

'Ah yes, boyo,' answered the deacon, 'but the collection is in English.'

Three men, Lee, Georgio and Dai married wives from different countries.
The first man, Lee, married a woman from China.  He told her that she
was to do the dishes and house cleaning.  It took a couple of days, but
on the third day, Lee came home to see a clean house and all dishes washed
and put away neatly.

The second man, Georgio, married a woman from Italy.  He gave his
wife orders that she was to do all the cleaning, dishes and the cooking. The
first day he didn't see any results, but the next day Georgio saw it was
slightly better.  By the third day, he saw his house was clean, the
dishes were done and there was a huge dinner on the table.

The third man, Dai, married a Welsh girl.  He ordered her to keep
the house cleaned, dishes washed, lawn mowed, laundry washed, and hot meals
on the table for every meal.

Dai said the first day he didn't see anything.
The second day he
still didn't see anything.
But by the third day, some of the swelling
had gone down and he could see a little out of his left eye, and his arm was
healed enough that Dai could fix himself a sandwich and load the dishwasher.

Footnote:
This item was kindly send by John Collin, please send us your examples of distinctive
Welsh humour.