The Canada v USA enmity must be one of the biggest rivalries on the planet.  As
a neutral, I know how Canadians bristle if you call them Americans, and vice versa.  Now one of these stories is alleged to be true, while the other is a well known urban myth.  I will leave you to
work out which is which.

Sometimes it DOES take a Rocket Scientist!

Scientists at the Canadian Research Facility built a gun specifically to launch dead chickens at the windshields of airliners and military jets, all
travelling at maximum velocity. The idea is to simulate the
frequent incidents of collisions with airborne fowl to test the strength of the windshields.

Amtrak engineers heard about the gun and were eager to test it on the windshields of their new high speed trains.  Arrangements were made, and a gun was sent to the NASA engineers. 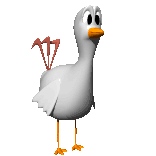 When the gun was fired, the engineers stood shocked as the chicken hurled out of the barrel, crashed into the shatterproof shield, smashed it to
smithereens, blasted through the control console, snapped the engineer's
backrest in two and embedded itself in the back wall of the cabin, like an arrow shot from a bow.

The horrified Americans sent the
Canadian Research Facility the disastrous results of the experiment, along with the designs of the windshield and begged the Canadian scientists for suggestions.

The Canadian Research Facility responded with a
one-line memo:
'Defrost the chicken.'

Sometimes
Those Who Try and Pull Rank Get Their Come-uppance

One foggy night, a United States Aircraft Carrier was cruising off the coast of Newfoundland and the junior radar operator
spotted a light
in the gloom.  Here is a transcript of what happened next.

The radar operator worked out that a collision was likely unless the other vessel changed
its course.  So he sent a radio message.

U.S. Aircraft Carrier Radar Officer:
'Please divert
your course at least 7 degrees to the south to avoid a collision'.

Back came the reply:
'You must be joking, I recommend you divert your course instead'.

The U.S. Radar Officer referred the matter to his superior officer. And
reported the incident as insubordination.

As a result the Captain of the Air Craft Carrier sent a second message.
'I believe that I out rank you, and
am giving you a direct order to divert your
course now!!!'

Canadian Radio Operator:
'This is a lighthouse.  I suggest you take evasive action.'

Footnote to the lighthouse urban myth

The
lighthouse story is an urban myth.  Our friend Jackson heard a rumour that the
story is discussed at the annual coastguards' convention, where the different versions are compared and scored.  Apparently most versions are preposterous because the ship would have visual contact with the
lighthouse.  However, if you add a fog to your version you gain credibility - at least in the eyes of the lighthouse keepers.

Origin of this Collision Urban
Myth

Merv recogns that the origin of this collision story was slightly
different, he says:

The true 25-year-old American story is that of the colonel in charge of
the large air base in Niagara Falls, NY.

He was going to a meeting in Texas so he flew one of the F16s. Over
Pennsylvania, he was advised by air traffic controllers to divert to 60
(thousand feet).

He asked why and was told he was on a possible collision course with
another aircraft. "This is Colonel so-and-so of the Niagara Falls Air Base.
Advise the other aircraft to divert."

"Request you advise him yourself, sir, it's Air Force One."

He got so much ridicule for this he was forced to resign and at his
retirement party they gave him a huge model of Air Force One.

The story got front page coverage in the Niagara Gazette and the Buffalo
News especially ran a large picture of him getting the model aircraft.

It was also on the local TV networks every day for a week and though I've
been looking off and on for at least a decade and can't find any mention of
it anywhere. This is not an urban myth. I was there, so to speak. This is
from memory so details are fuzzy. If you happen to trip over the original
details, please forward them to me.

See the Video version of the saga here - Free
Download

An old Canadian sailor from HMCS Sackville and an American Gunbunny were sitting in the Duke of Buckingham
pub arguing about who'd had the tougher career.

'I did 30 years in the
29th Field Artillery', the American declared proudly, 'and fought in three of
my country's
wars. Fresh out of boot camp I hit the beach at Okinawa, clawed my way up the blood-soaked sand, and eventually took out an entire enemy machine gun nest with a single grenade. 'As a sergeant, I
fought in Korea alongside General MacArthur. We pushed back the enemy inch by bloody inch all the way up to the Chinese border, always under a barrage of artillery and small arms fire. 'Finally, as a gunny
sergeant, I did three consecutive combat tours in Vietnam. We humped through the mud and razor grass for 14 hours a day, plagued by rain and mosquitoes, ducking under sniper fire all day and mortar fire all
night. In a fire-fight, we'd fire until our arms ached and our guns were empty, then we'd charge the enemy with bayonets!'

'Ah', said the Sailor with a dismissive wave of his hand, 'lucky
Gunbunny, all shore
duty, huh?'