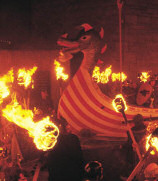 What people remember most about the Up-Helly-Aa celebration is Viking warriors burning their longship.  Most of the men of Lerwick
(900+) are involved in preparing for the big night by building the ships and
organizing the procession.

You may wonder: 'Where in the world is Lerwick?'  No, it's not in
Scandinavia, Lerwick is the capital of the Shetland Islands, which are at the very
north of the UK.

How
Many People Does it Take to Burn the Up-Helly-Aa Longboat? 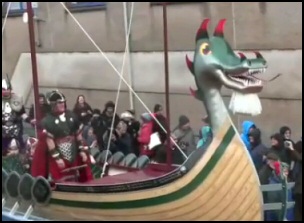 In 2015, Up-Helly-Aa will be on Tuesday 26th of January.  Mark Evans
will lead the procession.

In 2015, Up-Helly-Aa was held on Tuesday 27th of January.  Neil
Robertson - Guizer Jarl - led the procession.

In 2015, Up-Helly-Aa was held on Tuesday 28th of January.  The
procession was led by the Ivor Cluness Guizer Jarl.

In 2013, Up-Helly-Aa fell on Tuesday 29th of January.  At the head
of the
procession was Stephen Grant Guizer Jarl.

In 2012, Up-Helly-Aa will be held on Tuesday 31st January.  The
procession was led by the David Nicolson Guizer Jarl.

In 2011, Up-Helly-Aa was held on Tuesday 25th January.  The
procession was led by John Hunter the Guizer Jarl.

The Up-Helly-Aa 2010  procession was led by Rae Simpson the Guizer Jarl.
Rae followed in the torch light of his father Mitnie (1987) and
grandfather Tammie (1968). 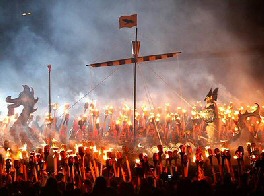 As usual the burning of the Viking longship went off without a hitch.
By 5:00pm in January it's dark at the latitude of Lerwick in the
Shetland Isles.  At 5:30 the procession got underway, and led by Guizer
Jarl Stephen Mouat, the other Jarls dragged the Viking ship through the
town to its final destination.

A fanfare signalled the Guizers to hurl their fiery torches into the
Viking replica boat.  In no time the wooden decking was ablaze, Up-Helly-Aa's
mission had been accomplished for another year, led by 'Othere Fra
Halogaland' Stephen Mouat.

The honour of leading the Viking boat on its half mile journey into the water is bestowed on the Guizer Jarl.  In 2008 it
was Roy Leask who proudly carried in the
longship by the other 800 Vikings.  I say proudly carried down, because the honour is such that you have to serve on the committee for 15 years before you can be the chief Guizer. 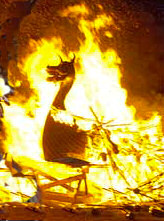 Up-Helly-Aa is a relatively modern festival. There is some evidence that people in rural Shetland
celebrated the 24th day after Christmas as 'Antonsmas' or 'Up Helly Night', but there is no
evidence that their cousins in Lerwick did the same.  More recently, Up-Helly-Aa is celebrated on the last Tuesday in January.

Naturally, the burning of the longship is the focal point of the evening.
But do you suppose that the crowd then disperses and everyone goes home to
sleep?  It's never been known for serious Up-Helly-Aa revellers not to
visit the local hostelries both before and after the boat's glorious last
journey.  Also, think of those 800 Jarls building the boat, that would give
you a thirst, then it would drive you to drink when your beloved boat goes up in
flames.

One other aspect, anyone who has any musical skill, or any desire to sing in
public, knows that they would have an appreciative audience on this night. After
the burning the boat the party really gets under way as 48 squads, consisting of
precisely 902 Guizers, stagger to around the eleven halls.

The emergence of Yuletide and New Year festivities in the town seems to post-date the Napoleonic Wars, when soldiers and sailors came home with rowdy habits
and a taste for firearms.

On old Christmas eve in 1824 a visiting Methodist missionary wrote in his diary that 'the whole town was in an uproar: from twelve o clock last night until late this night blowing
of horns, beating of drums, tinkling of old tin kettles, firing of guns, shouting, bawling, fiddling, fifeing, drinking, fighting. This was the state of the town all the night - the street was as thronged with
people as any fair I ever saw in England.'

As Lerwick grew in size the celebrations became more elaborate.  Sometime about 1840 the participants introduced burning tar barrels into the proceedings.
'Sometimes', as one observer wrote, 'there were two tubs fastened to a great raft-like frame knocked together at the Docks, whence the combustibles were generally obtained. Two chains were fastened to the bogie
a supporting the capacious tub or tar-barrel . . . eked to these were two strong ropes on which a motley mob, wearing masks for the most part, fastened. A party of about a dozen were told off to stir up the
molten contents.'

The main street of Lerwick in the mid-19th century was extremely narrow, and rival groups of tar-barrelers frequently clashed in the middle. The proceeding were thus dangerous and dirty,
and Lerwick's middle classes often complained about them. The Town Council began to appoint special constables every Christmas to control the revellers, with only limited success. When the end came for tar-barreling,
in the early 1870s, it seems to have been because the young Lerwegians themselves had decided it was time for a change.

At least in
Lerwick, the Guizer fraternity is strictly a male preserve.  A politically correct Viking seems like an oxymoron.

Around 1870 a group of young men in the town with intellectual interests injected a
series of new ideas into the proceedings. First, they improvised the name Up-Helly-Aa, and gradually postponed the celebrations until the end of January. Secondly, they introduced a far more elaborate element
of disguise - 'guizing' - into the new festival. Thirdly, they inaugurated a torchlight procession. 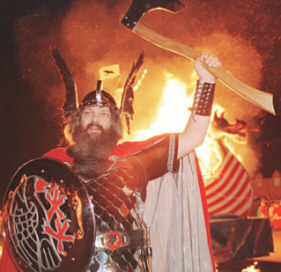 At the same time they were toying with the idea of introducing Viking themes to their new festival. The
first signs of this new development appeared in 1877, but it was not until the late 1880s that a Viking longship - the 'galley' - appeared, and as late as 1906 that a 'Guizer Jarl', the chief guizer, arrived on
the scene. It was not until after the First World War that there was a squad of Vikings, the 'Guizer Jarl's Squad', in the procession every year.

Up to the Second World War Up-Helly-Aa was overwhelmingly a
festival of young working class men - women have never taken part in the procession - and during the depression years the operation was run on a shoestring. In the winter of 1931-32 there was an unsuccessful
move to cancel the festival because of the dire economic situation in the town. At the same time, the Up-Helly-Aa committee became a self-confident organisation which poked fun at the
pompous in the by then
long-established Up-Helly-Aa 'bill' - sometimes driving their victims to fury.

Since 1949, when the festival resumed after the war, much has changed and much has remained the same. That year the BBC recorded
a major radio programme on Up-Helly-Aa, and from that moment Up-Helly-Aa, not noted for its split-second timing before the war, became a model of efficient organisation. The numbers participating in the
festival have become much greater, and the resources required correspondingly larger. Whereas in the 19th century individuals kept open house to welcome the guizers on Up-Helly-Aa night, men and women now
co-operate to open large halls throughout the town to entertain them.

However, despite the changes, there are numerous threads connecting the Up-Helly-Aa of today with its predecessors 150 years ago.

Dates for Up-Helly-Aa in Lerwick

However, similar if smaller Up-Helly-Aa celebrations occur in other Viking strongholds on
different dates.