I cannot put my finger on it, but a true story has an indefinable ingredient that
made up stories lack.  Here is a case in point.

The Cat: a True story by Pauline Henderson

Several years ago when I was returning home from work I encountered a cat tottering down the road. 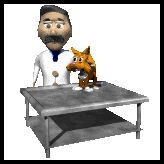 It was dark but in the car headlights I could
see that it was in a bad way. It was very emaciated and its fur was sticking up just like a lavatory brush. On wary examination I discovered that it had hardly a tooth in its head and that walking in a straight
line was definitely a no-no.

I tentatively put it in the car and drove to the local vet, refusing to pay on the grounds that it was a stray. They sent me to the nearest place [approximately six miles
away] as I recall, where it could be treated by the RSPCA [Royal Society for the Prevention of Cruelty to Animals]. I arrived with my teenage son clutching the cat (which incidentally was evidently at death's

door, being strangely reserved and placid), in a towel.

I was informed that the cat was dehydrated; its kidneys were failing and due to having no teeth it was unable to eat. We left it there and returned
home.

A '
phone call later that evening informed me that the cat needed to be '
put down'
and I had to give consent. This I did reluctantly for the sake of the animal.

Later that same evening a
neighbour who lived a small distance away knocked on my door and asked if I had seen his wife's
cat. My son immediately disappeared into his bedroom leaving me to face the music. I invited the neighbour to use
my '
phone to inquire of the RSPCA about the said '
stray'
cat while I urgently pleaded my case regarding its condition.

'Where is my cat?'
he demanded over the '
phone. I looked at him, smiling weakly.

He turned to me, his face grave.

Much later I learned that the cat was twenty one years old and that the owners did not '
like'
to have it '
put down'
. Personally, I think I did them a favour.

Can you believe this? Could it only happen in the USA?

A jury of her peers awarded a woman from Austin, Texas $780,000  after breaking her ankle tripping over a toddler who was running amok inside a furniture store. The owners of the store were
understandably surprised at the verdict, considering the misbehaving tyke was the woman's
own son.

A 19 year old youth from Los Angeles won $74,000 and medical expenses when his neighbour ran his hand
over with a Honda Accord. The young man apparently didn't
notice someone was at the wheel of the car whose hubcap he was trying to steal.

A thief from Bristol, PA, was leaving a house he had robbed
through the garage. He was not able to get the garage door to go up, the automatic door opener was malfunctioning. He couldn't
re-enter the house because the door connecting the house and garage locked when
he pulled it shut. The family was on vacation, so the robber. found himself locked in the garage for eight days. He subsisted on a case of Pepsi he found, and a large bag of dry dog food. This upset the
thief, so he sued the homeowner's
insurance claiming the situation caused him undue mental anguish. The jury agreed to the tune of half a million dollars and change.

A Philadelphia restaurant was ordered to pay a woman
from Lancaster, PA, $113,500  after she slipped on a spilled soft drink and broke her coccyx. The beverage was on the floor because the woman had thrown it at her boyfriend thirty seconds earlier during
an argument.

A woman from Claymont, Delaware, successfully sued the owner of a night club in a neighbouring city when she fell from the bathroom window to the floor and knocked out her two front teeth.
This occurred while she was trying to sneak through the window in the lady's
room to avoid paying the $3.50 cover charge. She was awarded $12,000  and dental expenses