Thanks to the Interstate Highway System, it is now possible to journey from coast
to coast without seeing anything. Charles Kuralt

These are real requests fielded by an American travel consultant.

Passport Saga
I got a call from a Congress man, who wanted to go to Cape
Town. I started to explain that he needed a passport.  He interrupted me with, 'I'm not trying to make you look stupid, but Capetown is in Massachusetts.'

Without trying to make him lose face, I calmly explained, 'Cape Cod is in
Massachusetts, Cape Town is in South Africa.'
Her response - click, the phone went dead.

A Senior Vermont Congressman called, furious about a Florida package we booked for him. I asked for details of what was wrong with the hotel in Orlando. He said he
was expecting an ocean-view room. I tried to explain that is not possible, since Orlando is in the middle of the state. He replied, 'Don't
lie to me. I am looking at the map, and Florida is a very thin state!!!'

Bad Hair Day
A New Hampshire Congresswoman asked me to book her an aisle seat on the airplane.  She did not want
her hair to get messed up by being near the window.

More Map Reading
I got a call from a Lawmaker's
wife who asked, 'Is it possible to see England from Canada?'  I said, 'No.'
She said, 'But they look so close on the map.'

Big Airport in Texas
An Aide for a Bush cabinet member once called
and asked if they could rent a car in Dallas.  When I looked at the reservation, I noticed that they only had a one-hour stop-over Dallas. When I asked him why he wanted to rent a car for just an hour, he said, 'I heard Dallas was a
big airport, and we will need a car to drive between the gates to save time.

Fastest Jet in America
An Illinois Congresswoman called last week. She needed to know how it was possible that her flight from Detroit left at 8:20am
and got into Chicago at 8:33am. I tried to explain that Michigan was an hour ahead of Illinois, but she could not understand the concept of time zones. Finally, I told her the plane went very fast, and she
bought that!

No Show
No one travelling on a business trip would be missed if he failed to
arrive.
Thorstein Veblen 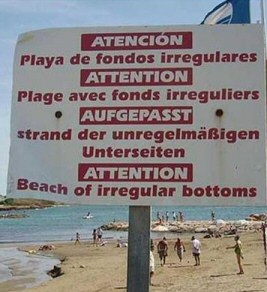 Passenger Manifest
A New Yorker called and asked, 'Do airlines put your physical description on your bag so they know whose
luggage belongs to who?'

I said, 'No, why do you ask?'
She replied, 'Well, when I checked in with the airline, they put a tag on my luggage that said (FAT), and I'm overweight, I think that is very rude.

'After putting her on hold for a minute while I 'looked into it'
(I was
actually laughing) I came back and explained the city code for Fresno, CA is (FAT), and that the airline was just putting a destination tag on her luggage.

I thought under my breath, a good job she
wasn't
going to Show Low airport in Arizona (SOW).

When you don't
need a Visa
A Senior Senator called and had a
question about the documents he needed in order to fly to China. After a lengthy discussion about passports, I reminded him he needed a visa. 'Oh no I don't
, I've been to China many times and never had to have
one of those.'  I double checked and sure enough, his stay required a visa. When I told him this he said, 'Look, I've been to China four times and every time they have accepted my American Express!'

Fast Flying
I am never flying to Jamaica with Airtours again. It took us nine hours, but it only took the Americans three hours.

Laughable, Risible and
Amusing
Complaints Made By Holidaymakers to Travel Agents

These questions were posted on an Australian Tourism website and the answers
are the actual responses by the website's official. Their travel agencies obviously have a sense of
humour.

Q: Will I be able to see kangaroos in the street when I visit Australia? (from USA)
A: Depends how much you've been drinking.

Q: Does it ever get windy in Australia? I have never seen it rain
on TV, how do the plants grow? (UK.)
A: We import all plants fully grown and then just sit around watching them die.

Q: I want to walk from Perth to Sydney - can I follow the railroad tracks?
(Sweden)
A: Sure, it's only three thousand miles, take lots of water.

Q: Is it safe to run around in the bushes in Australia? (Sweden)
A: So it's true what they say about Swedes.

Q: Are there any
ATMs (cash machines) in Australia? Can you send me a list of them in Brisbane, Cairns, Townsville and Hervey Bay? (UK).
A: What did your last slave die of?

Q: Can you give me some information about hippo
racing in Australia? (USA)

A: A-fri-ca is the big triangle-shaped continent south of Europe.
Aus-tra-lia is that big island in the middle of the Pacific which does not... oh forget it. Sure, the hippo
racing is every Tuesday night in Kings Cross.

Q: Which direction is North in Australia? (USA)
A: Face south and then turn 180 degrees. Contact us when you get there and we'll send the rest of the
directions.

Q: Can you send me the Vienna Boys' Choir schedule? (USA)
A: Aus-tri-a is that quaint little country bordering Ger-man-y, which is...oh forget it. Sure, the Vienna Boys Choir plays every
Tuesday night in Kings Cross, straight after the hippo races.

Q: Are there supermarkets in Sydney, and is milk available all year round?  (Germany)
A: No, we are a peaceful civilization of vegan
hunter/gatherers. Milk is illegal.

Q! : Please send a list of all doctors in Australia who can dispense rattlesnake serum. (USA)
A: Rattlesnakes live in A-mer-i-ca, which is where YOU come from. All
Australian snakes are perfectly harmless, can be safely handled, and make good pets.

Q: Can you tell me the regions in Tasmania where the female population is smaller than the male population? (Italy)
A:
Yes, gay nightclubs.

Q: Do you celebrate Christmas in Australia? (France)
A: Only at Christmas.

Q: Will I be able to speak English most places I go? (USA)
A: Yes, but you'll have to learn it
first.

If you're considering travel to Australia you can find the information
for yourself by using Expedia's travel guide option. If you want to go to
Canberra,

check Expedia's travel guide to Canberra, if you like Sydney, take a
look at the Sydney page. Who knows, you may even avoid asking a question
that ends up on our site!

Footnote:
If you have any good Travel Agent Jokes please send them to us 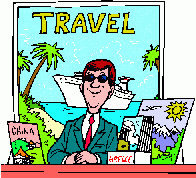 Act of kindness? A travel agent looked up from his desk to see an older lady and an older gentleman peering in
the shop window at the posters showing the glamorous destinations around the world. The agent had had a good week and the dejected couple looking in the window gave him a rare feeling of generosity.

He
called them into his shop and said, 'I know that on your pension you could never hope to have a holiday, so I am sending you off to a fabulous resort at my expense, and I won't take no for an answer.'

He took them inside and asked his secretary to write two flight tickets and book a room in a five star hotel. They, as can be expected, gladly accepted, and were on their way.

About a month later the
little lady came in to his shop. 'And how did you like your holiday?' he asked eagerly.

'The flight was exciting and the room was lovely,' she answered. 'I've come to thank you. But, one thing puzzled
me. Who was that old guy I had to share the room with?'

Footnote:
Note please read the
above joke particularly carefully.  It was all Guy's fault; at first I missed the point that the old man and the old woman who were looking in the shop window,
did not know each other; thus on first reading I missed what is a cracking
travel agent joke.