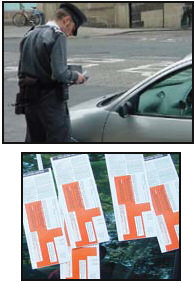 Mark went to the shops the other day, and he was only in there for only about
five minutes. When he came out there was a traffic warden writing out a parking
ticket for parking on a double yellow line.

Mark approached him and said conversationally, 'Aw, come on, mate, how about
giving a feller a break?'

The warden concentrated furiously on writing out
the ticket and completely ignored Mark's plea. Mark, rather angry at being so
openly ignored, called the warden 'a pencil-necked German'

The warden glared
at Mark and started writing another ticket, this time for having bald tyres.
Mark called him another even ruder name. The traffic warden finished the second
ticket and put it on the windscreen alongside the first. Then he started writing
a third ticket! This went on for about 10 minutes.

The more Mark abused him,
the more tickets he wrote.

Mark did not care one iota; his car was parked
around the corner.