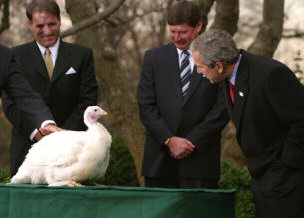 Going with tradition, George W Bush pardons the turkey on the White House lawn. Each year the President of the United States pardons a turkey before Thanksgiving at a White House ceremony. The tradition's origin is uncertain. One story claims that Harry Truman pardoned a turkey in 1947, but the Truman Library has been unable to find any evidence for this. Another claims that the tradition dates back to Abraham Lincoln, in October 1863, pardoning his son Tad's pet turkey. Both of these stories have been cited in recent presidential speeches. Interestingly, the great American public is allowed to vote for the turkeys' names on the White House web site. 2006's turkeys were named Flyer and Fryer; 2005's turkeys were named Marshmallow and Yam; 2004's were named Biscuit and Gravy; and 2003's were Stars and Stripes. Will and Guy look forward to learning 2007's names

The professional American football team had just finished their daily practice session when a large turkey came strutting onto the field. While the players gazed in amazement, the turkey walked up to the head coach and demanded to be given a chance to play at tight end. Everyone stared in silence as the turkey caught pass after pass and ran right through the defensive line. When the turkey returned to the sidelines, the coach shouted, 'You're superb. Sign up for the season, and I'll see to it that you get a huge bonus.' 'Forget the bonus,' replied the turkey, 'What I want to know is, does your season go past Thanksgiving Day?' See another Funny Thanksgiving Turkey Picture