One of the most peculiar driving stories that we have seen. Note the date 23/6/1974 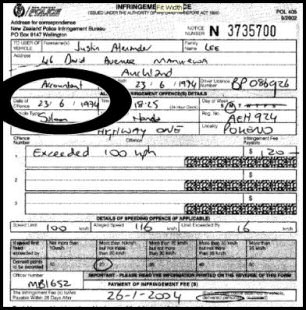 Yesterday, I was presented with the above infringement notice (copy attached for your records) while returning home from the Parachute music festival at Mystery Creek near Hamilton over the long Auckland Anniversary weekend. I had a most excellent weekend, but this is not why I'm writing to you at this time. Unfortunately, there are a couple of irregularities with the infringement notice that are causing me some consternation and hopefully you can clear them up or, preferably, forget about the whole thing entirely. Firstly, the 'date of offence' is listed as the 23rd of June 1974 with the time being at or around half past six in the evening. This is a grave concern because I was not issued a drivers license until sometime in 1990 and I have no desire to be charged with driving while not legally licensed. I do not have a clear recollection of very much at all before I was three and a half years old, so I rang Mum to see if she remembered what I was doing that day. She said that - coincidentally - I was born that day!! Mum mentioned that I was born at around five o'clock in the evening on that day in Porirua, which is not far from Wellington. She also said Porirua was a bustling suburb of young, low-income earning people who were trying to get ahead. Back in the 70's people were coming to terms with oil shocks, high-inflation and wage freezes, but that's not important right now. For me to have travelled from Porirua to the foot of the Bombay Kills just out of Auckland by six thirty, I would had to have crawled into the first car in the hospital parking lot and headed fro Auckland at around 1,000 km/h. For this reason, it is entirely possible that the constable who clocked me back in 1974 was holding his laser equipment upside down and instead of doing 116 km/h as per the infringement notice, it is more likely that I was doing 911 km/h. This is where it starts getting really strange. The car that I must have crawled into had the same license plate as the one I have now - AEII924 (according to the infringement notice). However, my car is a dark gray Nissan Bluebird SSS, with dual cup holder, 1800cc's of grunt, air-conditioning and electric windows. You will notice that a time-travel option is not included on this model, so that rules out any 'Back to the Future' issues and the car I was driving back then could not have been the one I drive today. This is clarified by the infringement notice which states that the vehicle was a Honda saloon. How this relates to my Nissan Bluebird, I cannot fathom. I can only hypothesize that, back in 1974, the first range of proto-type Hondas had an automated number plate changing mechanism (like the A-team) which were used to avoid parking tickets and facilitate safer getaways from burglaries, armed hold-ups and the like. So to recap, it appears that on my birthday on June the 23rd 1974, I crawled out of the maternity ward, hijacked a seriously high powered Honda saloon with an automated number plate changing mechanism, drove to Auckland at close to Mach 1, was pulled over approaching the Bombay hills and unwittingly changed the automated number plate changing mechanism to show the same number as a car I would come to own almost thirty years later!! (The chance of selecting the same number plate is a mere 1 in 308,915,776 - so quite conceivable) I am currently residing at the address listed at the top of this letter. I expect you will want to apprehend me fairly shortly now that we've established that I may have committed the following offences: - Grand theft auto (I probably stole the Honda as my parents drove a white Ford Cortina at that stage) - Driving without a license - Driving at ludicrous speed using a motor vehicle - Evading the law using an automated number plate changing mechanism. If you could provide a clearer indication as to why the 'date of offence' is that same as my birthday, and why the vehicle make and type bears no resemblance to the number plate listed on the infringement notice, it would be appreciated. Mind you, I wouldn't be too disappointed if we agreed to let this one go. I could really use the $120 dollars as I'm lowering my Nissan, installing an excessively noisy waste-gate and boring it out for better performance in the street drags down Te Irirangi drive and around Weymouth. Thank you for considering my submission, I look forward to hearing from you. Regards, Justin Lee Justin Lee Encl. Copy of infringement notice N3735700 -------------------------------------------------------------------

Here is the Response:

30 March 2004 Justing Lee 46 David Avenue Manurewa AUCKLAND Dear Sir Infringement Notice: PN 3735700 I refer to your correspondence regarding the above infringement notice. After careful consideration of your comment and the circumstances surrounding the issue of this notice, is has been decided on this occasion to waive the offence. Accordingly, you are no longer required to pay the infringement fee. Yours faithfully Bryan Healey Senior Sergeant Bryan Healey Manager: Adjudication ae/rg One of the most peculiar driving stories that we have seen.

This is not a ticket, but if it were within my power, you would receive two. Because of your Bull headed, inconsiderate, feeble attempt at parking, you have taken enough room for a 20 mule team, 2 elephants, 1 goat and a safari of pygmies from the African interior. The reason for giving you this is so that in the future you may think of someone else, other than yourself. Besides I don't like domineering, egotistical or simple minded drivers and you probably fit into one of these categories. I sign off wishing you an early transmission failure (on the expressway at about 4:30 p.m.). Also may the Fleas of a thousand camels infest your armpits. With My Compliments! Guy Thomas

Do Not Park Here Either 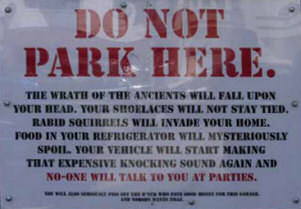 Commiserations to Eli Ellwood and the Reverend James Alexander who were given a parking ticket for putting the Pay and Display ticket on their dashboard rather than on the windscreen. Paul Necus, Head of Parking at Cambridge City Council, said there was no rule that required parking tickets to be stuck on a vehicle's windscreen  See more Funny Parking Tickets Footnote: Please send us your funny parking signs or tickets.   Good, clean yet free stories and jokes.  True stories, after dinner humour, urban myths and humorous short stories.