This section lists our favourite sports jokes, stories.
Wherever you meet sportsmen, whether from soccer, cricket, rugby or golf
you will find banter and a raft of unlikely nicknames. 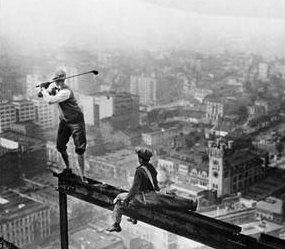 Bill Peterson, a Florida State football coach, 'You guys line up alphabetically by
height.'
And '
You guys pair up in groups of three, then line up in a circle.'

Lou Duva, veteran boxing trainer, on the
Spartan training regime of heavyweight Andrew Golota, 'He's
a guy who gets up at six o'
clock in the morning regardless of what time it is.'

Frank Layden, Utah Jazz president, on
a former player, 'I told him, 'Son, what is it with you? Is it ignorance or apathy?'
He said, 'Coach, I don't
know and I don't
care.'

Torrin Polk, University of Houston receiver, on his coach, John Jenkins, 'He treats us like men. He lets us wear earrings.'

For those of you watching who do not have television
sets, live commentary is on Radio 2.
Ted Lowe (Snooker)

Phil decided that at the ripe old age of 53 he needed to get himself into shape. He visited the local gym and spoke to a personal trainer who asked him if he could do the splits.

'Of course I can't', responded Phil.

'Well, just how flexible are you?'
she questioned.

Some interesting and amusing facts about games in pubs in the
UK:

A thief who stole a World Cup ticket from a woman's
handbag was caught after sitting down to watch the game next to his victim's
husband.

The 34-year-old mugged Eva Standmann, 42, as she made her way to
the Munich stadium for the Brazil-Australia game at the weekend and discovered the ticket in her bag. He took the woman's
place in the stadium where he was met by her husband Berndt, 43, who immediately called
security. A Munich police spokesman said, 'The thief found the ticket in the bag and decided to watch the game, not expecting to sit next to his victim's
husband, who immediately informed officers on duty at
the stadium.'