Here is Will and Guy's selection of snow dogs and other interesting
alternative sculptures to snow men.

A Classic Pair of Snow Dogs

What should we call these dog sculptures?
Dogman does not seem right.
Snowdog seems the
best description.

This looks painful.  How would you remove those snowballs?  A hot bath
looks the best way, but then Will and Guy are not vets. 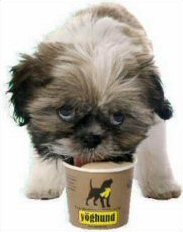 Will and Guy thought that Yogund would be a nice treat for your dog at
Christmas.  There is also
a product called Polar Pups, a cool treat made with soy milk.  Fact is
stranger than fiction. 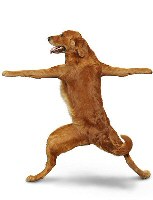 After Calendar Girls, we now have funny pictures of calendar dogs.  Dan
and Alejandra Boris have used computer graphics to create a Yoga Dogs
Calendar.

At first Guy thought that Yoga Dogs were a new breed, while Will thought
this was a wacky new piece of merchandise designed for kennels.  The
truth is this a Christmas present for dog owners.

Alejandra, who is a yoga teacher, reassures readers that no dogs were hurt
in making the calendars, the the funny but unnatural positions were down to
computer manipulation of genuine pictures.

Footnote:
Please send us your funny pictures of
Christmas dogs