September is the best time for skimming stones in because the weather is
warm, but the beaches and rivers are less crowded than August.

The
Game of Skipping Stones

Here is a game that anyone can play - skimming stones.  Will and Guy love throwing flat stones which bounce across a pond.  Actually, a calm sea is better because most beaches have an endless supply of
suitable pebbles.

One of the unexpected benefits of everyone having a video camera is that they can settle arguments over the number of bounces or skips that a pebble makes.  I always believed that
fifteen was good and twenty skips exceptional. Then I read about the exploits of Russell Byars.

Russell 'Rock Bottom' Byars threw a pebble that skipped an amazing 51 times.  The Guinness Book of Records has a category for stone skimming, and Russell sent them a video with not one, but two throws
of 50+ skips.  He also had three more attempts with over 40 skips.  Russell's record attempts took place on the river Allegheny, near Pittsburgh.

The Science of Skimming Stones

Oval, smooth and uniform stones are best.  Your stone
should be flat and fill most of the distance between thumb and forefinger. The knack is to simultaneously generate spin and forward velocity.  The final piece of the equation is the angle that the stone hits the water,
about 15 degrees is the best pitch for the strike. 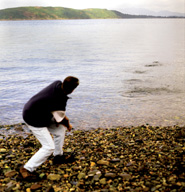 Scientific modelling can unravel some of the mystique, and I expect that one day boffins will build a robot to throw just the right shaped stone.  In fact, scientists have have already built catapults to fire aluminium
disks across a pool of water, naturally, they record the hops with a high-speed video camera.  In my opinion they should have used pebbles like everyone else!

Calculations show that about 50 mph is optimum
for skimming, this compares with about 80 mph for fast balls in baseball or cricket.  The conclusion is that you should throw the pebble as fast as possible, while developing maximum spin.  This reduces the
pebble's
speed just as curve balls in baseball and leg-breaks in cricket are slower than those fast balls.

Experts debate the best surface of the stones, should they be smooth or pitted?  However, they
are in agreement that the angle of attack should be about 15 degrees, and this fits in with practical experience, if you are 6ft 3' tall like the champion Russell Byars, you have to bend your knees to get the
most bounces from the skimming pebble.

The World Stone Skimming Championships were started in 1983 by Albert
Baker, and then stopped for a while until they were resurrected in 1997.
Contestants hail from around the world and the championships now attract
over 200 participants and many spectators. Anyone of any age and any level
of skill can enter the championships.

The championships are held every year. Anyone of any age and any level of
skill can enter. Each competitor is allowed 3 skims using specially selected
Easdale slate skimming stones. For a skim to qualify the stone must bounce
at least three times - it is then judged on the distance achieved before it
sinks.

Official Rules of the World Stone Skimming Championships are:

1) Skimming stones must be no more than 3" in diameter and formed
naturally of Easdale slate.

2) To qualify, the stone must bounce no less
than 3 times and stay within the designated lane as marked by the buoys.

3) Skims are judged on the distance thrown rather than the number of bounces.

4) The judges' decision is final (Even if they are wrong)

This year Will and Guy wish they were entering the competition because an
'Old Tosser' category has been introduced by popular request. This new
category is for those entrants who have reached the experienced and veteran
heights of no longer being in their 50s!

We would also like to point out that in Wales the championship Stone
Skimming takes place in Pembroke each August with over 200 entrants.

Here we can see the beautiful backdrop of Pembroke Castle.

Will remembers very clearly how Guy, Will and our friends regularly
played competitive games for the pure fun of it all.  See more
about The World Stone
Skimming Championships.

Origin of the phrase 'Ducks and Drakes'

An early reference in the sixteenth century talks of 'making ducks and drakes'.  Even allowing for medieval English, there is a clear connotation that the skimming stone is imitating a duck taking off from
a pond.

A little later the phrase 'ducks and drakes' implied wasting, squandering, or idling away one's money.  Latterly, the meaning has mutated to playing fast and loose, or being reckless.

Here is something different, not skimming stones, but giants playing catch.

The World Stone
Skimming Championships 2012
Will take place on 23rd September on
Easdale Island in the Inner Hebrides.

Refreshingly, this competition is open to anyone of any age and skill
level.

Each competitor is allowed three skims using specially selected Easdale
slate skimming stones. Easdale was once the centre of the Scottish slate
mining industry, and the championship's version of the Olympic stadium is
one of the island's disused quarries.

For a skim to qualify the stone must bounce at least three times - it is
then judged on the distance achieved before it sinks.

It is your chance to become a world champion.