For those lucky enough to have a sister, this is the day to express their
thankfulness.  When is Sister's Day?  Friday 1st of August
2014.

Sister's Day should be a day for a brother to say, 'sorry sis for teasing
you', and, 'I really shouldn't have half-drowned you in that pool'.
This is also a positive day; an overdue opportunity to express appreciation
for all the things that a sister did for their brother over the years.
For example, not snitching to the parents about who broke the outhouse
window, and being the goalie so that brother could practice
taking penalty kicks.

On reflection, I suppose since we have a Sister's Day then it's reasonable for
sisters to recognise their own sister on this day, but in my heart I think
Sister's Day is for brothers who just want to give their sister a hug and
ask for nothing in return.

The Benefits of a Sister

Looking back now I can see how lucky a brother I was to have a sister to complete a balanced,
idyllic family unity.  For those boys who have lost their mother, I can
see that a big sister would make the difference between being cared for, and
having a miserable childhood.  However, I am pleased that I had a
younger little sister, for me a big sister would have been too bossy - one
mother is all a boy needs!

Having a sister makes boys at least vaguely aware of what girls are like.
Three of my best friends also had younger sisters, and when the girls became
teenagers somehow the sister's friends became much more interesting!

When I was a young boy I wanted to have lots of brothers so that we could make
a football team, or at least have enough for a knock-about game.  As I
got older I could see this was a bad idea; it's much better to make friends and play
games with other boys of my own age.  Furthermore, I could appreciate the advantages of
the other boys dispersing to their own homes when the game was over.
No; one sister is better than eleven brothers.

Sister Litmus Test
Question: How can you tell if an
Englishwoman has a
brother?
Answer:  She can explain football's off-side rule.

For sisters who themselves have a sister, then the first Friday in August could be a
time for a reunion.
In which case the more sisters and half-sisters you have, then the luckier you are, and
all the
more fun in jointly celebrating Sister's Day.

What is unique about
Sister's Day is that it falls on a Friday, and thus has a different
personality from Mother's Day and
Grandparents Day which are traditional Sunday events.  Another nice touch is
that having Sister's Day in August means that it's well away from Christmas, and other special days.

Friday is the natural day to celebrate sisterhood because it is the one day
of the week named after a woman - Odin's wife Freya.  Incidentally, the
French for Friday is Vendredi, which in turn is based on the Roman goddess
Venus.

As with other special days, Will and Guy seek to inject a little humour into
the occasion, here is our varied collection of humour for Sister's Day.

'What's your father's occupation?' asked Miss White on the first day of
the new academic year.

'He's a conjurer, Miss,' said Ranjit with a smile.

'How interesting, what's his favourite trick?'
'He saws people in half.'

'Gosh, Ranjit, now, the next question.
Have you any brothers or sisters?'

'One half brother and two half-sisters, 'replied Ranjit cheerfully.

Sister Put-down
"I was raised as an only
child, which really annoyed my sister."  - Will Marsh

2) Out of the Mouths of Babes

Mia, a young girl complained to her father, 'Daddy, I wish I had a little
sister.'

Trying to be funny, her father joked, 'But darling, you already have a
sister.'

Confused, the toddler asked, 'I do?'

'Sure,' her dad said, trying harder to be funny, 'You don't see her
because every time you come in the front door, she scoots out the back
door.'

Mia, confused, thought for a moment and then beamed, 'You mean just like
my other daddy?'

Pamela, a Guider, asked one of her troop what good deed she had
done for the day.

'Well,' said Emily, a guide, 'Mum had only one dose of castor oil left,
so I let my younger sister have it.'

Craig was listening to his sister practice her singing. 'Sis,' he said,
'I wish you'd sing Christmas carols.'

'Then I'd only have to hear you once a year.' 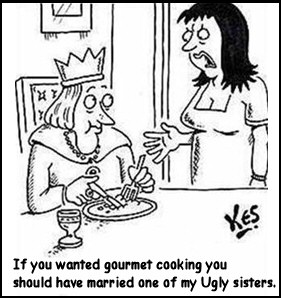 Teacher: What is this picture?

Teacher: It's a kangaroo.

Teacher: A kangaroo is a native of Australia.

Little Archie: Wow, my sister's married one of them.

Nursing sisters have their special day on May the 12th (International
Nursing Day).

Sisters in holy orders have their special day on February 10th, which
celebrates their patron saint: St Scholastica.