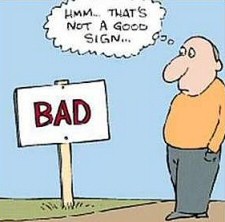 As you drive around your town, or travel to work on the train, look out for
amusing notices in your area, meanwhile enjoy our silly sign pictures.

Deliveries at the Rear of Building?

School of Nursing and Midwifery - Deliveries at the rear of the building.
What can you picture?  Babies, or vans?  Which ever way you look at
it, this is a silly sign. 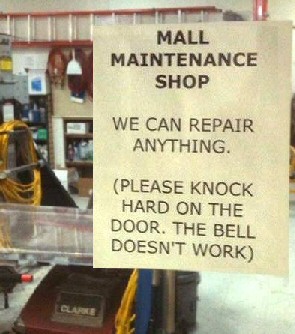 Hung drawn and quartered we hope!

These funny signs make us think: who put them there, are
the pictures faked.  Is the resulting picture funny, offensive, or just plain stupid.

When it comes to safety you would think that sign designers would take
more care.  Wrong.

Warning: Jumping into toxic waste does not give you super powers.  Often
it's the absurdity of these notices that makes them so humorous 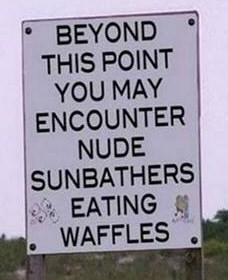 Danger - Hazardous fumes (fair enough)
But flashlight required after dark,
that's too much. 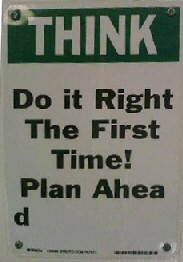 Who's for a Game of Golf?

We've been wondering who creates these
joke signs.

How to Deal With 'Customer
Complaints' 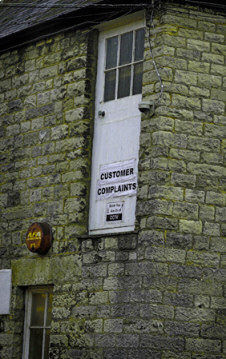 Crisis Counseling - Temporarily Out of
Service 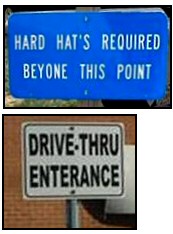 Jeff Deck and Benjamin Herson, have launched a campaign to correct
spelling and grammar mistakes on American signs.  Depending on your
point of view, the best, or worst example is on the Watchtower at the Grand
Canyon, it promises: 'emense westward view of the Grand Canyon'.

Officials instead of being embarrassed, put the wonderful spin on the
mistake by claiming 'a unique historical object of irreplaceable value'.
At first we thought they were talking about the Grand Canyon, but no they
were defending the spelling of 'emense'.

Amazingly to our way of thinking, the pair were charged with vandalism
for trying to rectify the spelling error on the Desert View Watchtower at
the Grand Canyon.  At worst they should have had a caution, but we are
staggered to discover they were fined $3,035 and banned from national parks
for a year.

"We're not going after people in a self-righteous manner, like fashion
police. Or trying to make them look stupid," Deck said. "Instead, we're
addressing specific errors like confusing 'its' for 'it's' or 'you're" for
'your.' Finding and correcting these, even every once in a while, is
incredibly satisfying."

To date Jeff and Benjamin have identified 231 signs with spelling or
punctuation mistakes.  Examples include, birthday candell's.
However, the old chestnuts of confusion between their, there and they're
feature strongly.

Will and Guy feel sure that Jeff and Benjamin would have something to say
about these particular banners: Make English America's offical Language.
Let us hope that the gentleman in the middle is better at calculating math
than he is at spelling 'arithmetic '.

Funny pictures and pointless signs give
us a laugh, but we ponder how much they cost in time for replacements.

Footnote:
Please send us your pictures of silly signs.