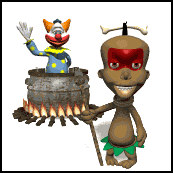 Funny wisecracks that can enliven your day.  Maybe you can work at
least one of these witticisms into a chat with your friends.

A Multi-lingual Slant On Silly Puns

These puns are from a New York magazine competition where competitors were asked to change one letter in a familiar non-English phrase and redefine it. These
multi-lingual puns were created by
Michael A. Alderete:

Please send us your silly puns.

'You are all part of our team now', said the HR rep during the welcoming
briefing. 'You get all the usual benefits and you can go to the cafeteria for
something to eat, but don't eat any employees.' The cannibals promised they
would not.

Four weeks later the cannibal chief remarked, 'You're all working very hard
and I'm satisfied with your work. We have noticed a marked increase in the whole
company's performance. However, one of our secretaries has disappeared. Do any
of you know what happened to her?' The cannibals all shook their heads. 'No.'
After the boss had left, the chief of the cannibals said to the others, 'Which
one of you idiots ate the secretary?'

A hand rose hesitantly. 'You fool!' the leader raged. 'For four weeks we've
been eating managers and no one noticed anything. But NOOOooo, you had to go and
eat someone who actually does something.............

Will and Guy's
Recommendations on Further Ways to
Maintain Your Insanity:

A Pastor Will and Guy Know

I can remember the first time I did some missionary work on an Indian
Reservation in the southwest of New Mexico. After we had built a couple of
homes and we were getting ready to leave I asked the Chief if there was
anything else we could do before we left. He asked if we could put in a
light along the path to the outhouse. After doing it and leaving for home I
realized that was the first time I had wired a head for a reservation.

Will
and Guy's Favourite Top Ten Funny, But Silly Puns

The foregoing 10 puns were entered in a contest. With 10 entries, you
might figure one would win. Unfortunately, no pun in ten did.

Kindly sent in by David Foley