An Englishman, Welshman and an American were having a drink. At first they talked about cars and farms, and true to form, the American had the swankiest car and the biggest farm.  Then they got to talking about children's names. 'My son was born on St David's Day', remarked the Welshman, 'So - look you, we obviously Christened him David.' 'That's a real coincidence', observed the Englishman', My son was born on Michaelmas Day, 29th of September, so we decided to call him Michael.' 'That's remarkable', piped up the American, 'Exactly the same thing happened with my son Pancake.'

It was Shrove Tuesday and Mrs Thomas was making pancakes for her sons, Michael 6, and Eddie 8. As usual, the brothers began to argue over who should get the first pancake. Their mother saw a wonderful opportunity for a moral lesson. 'If Jesus were sitting at the table, He would say, "Let my brother have the first pancake".' Quick as a flash Eddie turned to Michael and said, 'Michael, today you can be Jesus!'

What did the young pancake say to the old burnt pancake? I don't like your flip side.
Shrove Tuesday? - Give me Mardi Gras any day! 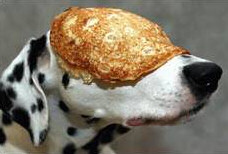 Every dog has his day, but for Patch, Pancake Day was not it.  (Kindly sent in by Jason E)

One February Emma went to her psychiatrist.  She told him, "My friends said that I had to come see you because they think I have a problem with pancakes." The psychiatrist says, "Why do they think that?" "Well," Emma replies. "Because, I just like pancakes." "That's not a problem," the psychiatrist responds. "I love griddle cakes too!" "Really?!" the Emma exclaims. "Then you should come to my house, I have a whole attic full of pancakes!"

On April 1st John's mother put a fire cracker under the pancakes. She blew her stack.

Shroving is a ancient British custom in which children sang or recited poetry in exchange for food or money. A popular shroving rhyme went like this: Knock, knock, the pan's hot And we are coming a-shroving For a piece of pancake Or a piece of bacon Or a piece of truckle* cheese Of your own making. *Truckle cheese is barrel shaped and is often mature Cheddar.

Some Tasty International Pancakes Brought to You by Stephanie and Will 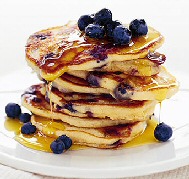 Why Pancake Day is Celebrated Less in the USA

Much of America celebrates Mardi Gras on the day before Lent.  That's the same day as Shrove Tuesday, and as there is no contest between pancakes and a parade followed by a party, Shrove Tuesday gets overlooked anywhere where they celebrate Mardi Gras.  Incidentally 'Mardi' is the French for Tuesday and Gras means fat, hence 'Fat Tuesday'.

Etymology of the Word Shrove

In modern English, the word 'Shrove' has no meaning outside of pancake or Shrove Tuesday.  Academics can trace shrove to the past tense of the verb shrive, which itself means absolution.  This derivation helps to cement the meaning of eating up luxury food before the penance of fasting during Lent. If you bring to mind other old words such as Yuletide (Christmas) and Eastertide, then it will be no surprise that there are lesser known '-tides', Allhallowtide (Halloween), Whitsuntide (Whitson) and Shrovetide.  My point is that Shrove Tuesday is the last day of Shrovetide.

In the 21st century, Shrove Tuesday is most strongly associated with pancake activities.

Shrovetide football in Ashbourne, Derbyshire, England is something different, a unique game.  On Shrove Tuesday, and also on Ash Wednesday, the Up'ards play the Down'ards, its a no hold's barred game of football with the goals three miles apart. Instead of a kick-off, Shrovetide has a 'turning up' where a dignitary throws the special ornate ball into the crowd and the game starts.  The event first came to the wider public's notice when in 1928 the then Prince of Wales (Later abdicating King Edward VIII) got caught up in the mêlée.  Without modern-day protection officers he got sucked into the scrum and came out with his nose bleeding.

The only rules are: You must not intentionally cause harm to others No motorised vehicles No hiding the ball in bags or rucksacks No trespassing, especially in churchyards. Result for 2011 Tuesday's game was a draw with Adrian Webb for the Down'ards scoring a goal at 4:50 and then Richard Goodall scoring a goal for the Up'ards at 6:45. Wednesday's game was also draw with Simon Betteridge scoring for the Down'ards about 3:30 and then Simon Fisher scoring a goal for the Up'ards at 8:55. The first time in 75 years there have been four goals say Will and Guy. The 2010 game This was of the most controversial renewals for some years.  Eventually the committee decided that at the end of day one Dave Spencer's goal be disallowed because it was "goalled" AFTER the 22.00 deadline.  The amended result was a 1:1 draw. The 2008 Sensation In 2008 there was a sensation when the Up'ards were accused of cheating by having a counterfeit decoy ball.  Each year a new ball is crafted with most ornate design.  The Down'ards claim that a crucial time they were distracted by this fake impostor of a ball.  To get any progress along the 3 mile pitch you need brains and subterfuge, as well as brawn and speed; selling the proverbial dummy is OK, but introducing another ball threatens the integrity of the game.  The stewards' enquiry is likely to rumble on. Shrovetide Scores 2013 Up'ards 1 : 1 Down'ards 2012 Up'ards 1 : 1 Down'ards 2011 Up'ards 2 : 2 Down'ards 2010 Up'ards 1 : 1 Down'ards  2009 Up'ards 1 : 1 Down'ards 2008 Up'ards 2 : 0 Down'ards 2007 Up'ards 1 : 0 Down'ards 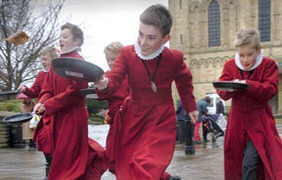 The Ripon traditional pancake race has been scrapped because of fears over health and safety. The event was revived 13 years ago and since then crowds have gathered in the centre of Ripon, North Yorkshire, UK, on Shrove Tuesday. Schoolchildren run down a cobbled street flipping pancakes after the start is signalled by the ringing of the cathedral's ancient 'pancake bell' at 11 am. Organisers reluctantly scrapped the popular event this year because of mounting costs and bureaucracy linked to health and safety rules.  The police wanted more than £1,000, to control the event.  In the past, local schools and businesses have entered teams to race while tossing pancakes. Organiser Bernard Bateman added, 'Health and safety has just gone too far. It makes you think twice about even trying to hold events like this, even though they are extremely popular, especially amongst children. The main issue with health and safety is the cobbled street people could slip on, but it causes us so much trouble just for a little issue. This stupidity never happened previously. It's a shame that these issues stop the children enjoying such a traditional event.' Will and Guy can't help but agree with Mr Bateman.  We also wonder if this is just a UK problem, please let us know the Health and Safety situation is in other countries. 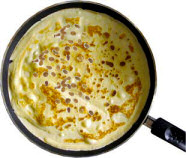 Sift the flour and salt into a large mixing bowl.  Top tip: Hold the sieve high above the bowl so the flour gets an airing.  Break the eggs into the flour (naturally no shells). Then whisk the eggs, a fork is fine, but lovers of gismos may prefer to use an electric whisk.  Another tip: leave the mixture for 30 minutes so that any difficult lumps will dissolve naturally. Now you are ready to add small quantities of the milk and water mixture, keep whisking until you get the consistency of thin cream.  You always get lumps, but have faith, eventually they will dissolve into the mixture.  Next melt the butter in a pan. Spoon the butter into the batter and whisk it in.  Tip: use kitchen paper to smear the pan with butter before you make each pancake. Cooking the Pancakes: Get the pan smoking hot, then turn the heat down to medium.  By all means experiment with various thicknesses, but my opinion is that thinner is better, aim more for crpes rather than crumpets.  Here is where you add those sultanas, I think about 20 is right, but be flexible. Trick: As soon as the batter hits the hot pan, tip the mixture around from side to side to get the base evenly coated with batter.  It should take only half a minute to cook the first side. The first pancake is often a bit leathery - no worries, the rest will be fine.

Here is a high risk, high reward strategy - toss your pancake.  Remember that 'leathery' first pancake?  Use it to practice your tossing.  The secret is to flick the wrist so that you give the pancake a slow spin, then bring the pan down in sympathy with the flipping pancake. To serve: Squeeze fresh lemon juice (else use one of those plastic lemon juice bottles) Some like sugar sprinkled on their pancakes (not me) Option 1: Spread maple syrup. Option 2: Crpes Suzette variation: Add one finger of warm brandy to the cooked pancake then set fire with a match. (If you are not a poser, you are better off drinking the brandy as a chaser.) Roll-up your pancake with a fork then cut pieces of your 'tube'. Secret - Eat your pancakes fresh; re-heated pancakes lose their texture compared with those straight out of the pan. Footnote: Please send us your funny Shrove Tuesday 2013 stories and pancake jokes.