A report from ALMATY in Kazakhstan  (Reuters) - Burglars locked the funeral parlour employee in a coffin and kept him there unconscious while searching for cash and valuables in the shop. Serik Sarsenbayev said he was my himself late at night when two masked burglars burst into the funeral parlour and beat him until he fainted. The thieves then stuffed him into a wooden coffin and nailed it closed.  What they were after was his money safe.  The unusual robbery happened in the steppe town of Temirtau near Almaty in Kazakhstan central Asia. Serik was only freed when the driver of the parlour's hearse came into work. The thieves made away with $23,000 (13,000 pounds) and have not yet been caught. 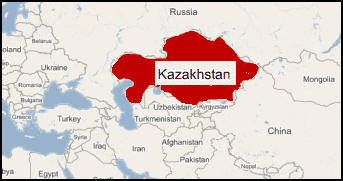 Bob is walking down a country road when he spots Farmer Harris standing in the middle of a huge field of corn doing absolutely nothing. Bob, curious to find out what's happening, walks all the way out to the farmer and asks him, 'Excuse me Farmer Harris, could you tell me what you are you doing?' 'I'm trying to win a Nobel Prize, 'the farmer replies. 'A Nobel Prize?' enquires Bob, puzzled. 'How?' 'Well, I heard they give the Nobel Prize to people who are out standing in their field.'

Barbara, during her nurse's training at a hospital just outside Washington, DC, had little money for meals, so she often resorted to the food provided at the hospital refectory, even though she had a great dislike for its rather bland taste. Barbara often took her breaks in the kitchen, and sometimes kindly visitors would give her some of the treats they had brought for patients who had not wanted to eat them. On one particular evening an English woman, from the East end of London, brought a home made pie to the kitchen and said to Barbara, 'Would you eat this up, love?' Barbara and her student friend devoured every last delicious crumb. Soon their benefactor returned, however, and asked, 'Is me 'usband's pie 'ot yet, dearie?'

A boat docked in a tiny Mexican village. An American tourist, Tony, complimented the Mexican fisherman on the quality of his fish and asked how long it took him to catch them. 'Not very long,' answered Gener, the fisherman. 'Then why didn't you stay out longer and catch more?' asked Tony. Gener explained that his small catch was sufficient to meet his needs and those of his family. Tony inquired, 'But what do you do with the rest of your time?'

'I sleep late, fish a little, play with my children, and take a siesta with my wife. In the evenings I go into the village to see my friends, dance a little, play the guitar, and sing a few songs. I have a full life.' Tony interrupted rather rudely, 'I have a Business Studies degree and I can help you. You should start by fishing longer every day. You can sell the extra fish you catch. With the revenue, you can buy a bigger boat, catch even more fish. With the extra money you will soon be able to buy a second one and a third one and so on until you have an entire fleet of trawlers. Instead of selling your fish to a middleman, you can negotiate directly with the processing plants and maybe even open your own plant. You can then leave this little village and move to Cancun, Acapulco, Los Angeles, or even New York City. From there you can direct your huge enterprise.' 'How long would that take?' wondered Gener, the Mexican fisherman.  'Twenty, perhaps twenty-five years,' replied Tony condescendingly.  'And after that?' Gener asked. 'After that you'll be able to retire, live in a tiny village near the sea, sleep late, fish a little, play with your grandchildren, take a siesta with your wife, and spend your evenings in the village, dancing, playing the guitar, and singing with your friends.'

...(vidFL2)
Steve Cleary was in his early 50's, retired and had started a second career.  However, he just couldn't seem to get to work on time.  Every day he was 5, 10, 15 minutes late.  However, he was a good worker, really clever, so the owner was in a quandary about how to deal with it.  Finally, one day he called Steve into the office for a talk. 'Steven, I have to tell you, I like your work ethic, you do a top class job, but you're being late so often is quite a worry.' 'Yes, I realise that, sir, and I am working on it.' replied Steve. 'I'm pleased to hear that, you are a team player. It's odd though, you're coming in late. I know you're retired from the Royal Navy. What did they say if you came in late there?' 'They said, "Good morning, Admiral".'

Reginald was terribly overweight, so his doctor placed him on a strict diet. 'I want you to eat regularly for two days, then skip a day, and repeat this procedure for two weeks. The next time I see you, you'll have lost at least five pounds, 'his doctor assured him. When Reginald returned he shocked his doctor by having lost almost twenty pounds. 'Why, that's amazing, 'the doctor said, greatly impressed, 'You certainly must have followed my instructions.' Reginald nodded, 'I'll tell you what though, I thought I was going to drop dead on the third day.' 'Why, from hunger?' asked his doctor. 'No, from all that skipping.' Footnote: Please send us your favourite very short story.