A few of short stories are true.  Some have only a grain of truth,
whilst most are just tall stories ripe for further embelishment.

A priest was being honoured at his retirement dinner after 25 years in the parish. A leading local politician, who was also a member of the congregation, was chosen to make the presentation and give a little
leaving speech at the dinner. He was delayed so the priest decided to say his own few words while they waited.

'I got my first impression of the parish from the first confession I heard here. I thought I
had been assigned to a terrible place. The very first person who entered my confessional told me he had stolen a television set and, when stopped by the police, had almost murdered the officer. He had stolen
money from his parents, embezzled from his place of business, had an affair with his boss's
wife, taken illegal drugs. I was appalled. But as the days went on I knew that my people were not all like that and I
had, indeed, come to a fine parish full of good and loving people.'

'I'll never forget the first day our parish priest arrived,' said the politician. 'In fact, I had the honour of being the first one to go to him in confession.'

Tommy and his Dad

An old man lived alone in Armagh.  He wanted to dig his potato garden, but it was very hard work.  His only son, Tommy, who used to help him, was in prison.  The old man wrote a
letter to his son and mentioned his predicament. 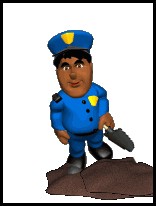 Dear Tommy, I am feeling pretty bad because it looks like I won't
be able to plant my potato garden this year. I'm just getting too old to be digging up a
garden plot. If you were here, all my troubles would be over. I know you would dig the plot for me. Love, Dad

A few days later he received a letter from his son.

Dear Dad, 'For Heaven's
SAKE, Dad, don't
dig up the garden! That's
where I buried the GUNS!'
Love, Tommy.

At 6am, the next morning, a dozen security agents and local police officers showed up and dug up
the entire area without finding any guns. They apologised to the old man and left. That same day the old man received another letter from his son.

Dear Dad, Go ahead and plant the potatoes now. It's
the
best I could do under the circumstances. Love, Tommy.

Care for Your Mother-in-law

The man thought about it and told him he would just have her shipped home.

The undertaker asked, 'Why would you spend £5,000 to ship your
mother-in-law home, when it would be wonderful to have her buried here and spend only £150?'

The man replied, 'a man died here 2,000 years ago, was buried here, and three days later he rose from the dead.
I just can't
take that chance.'

Ask your audience to suggest a caption!

Ideas for a caption:

[Cartoon and ideas kindly sent in by Perry Estelle]

Footnote:
Please send us your after dinner short
story.