Will and Guy are both qualified schoolteachers. We would never belittle nor embarrass students intentionally, however, we are unable to let these errors go without a laugh or two.
This is a compilation of UK students' work, mostly at year 10 level.

Ancient Egypt was inhabited by mummies and they all wrote in hydraulics. They lived in the Sarah Dessert and travelled by Camelot. The
climate of the Sarah is such that the inhabitants have to live elsewhere.

The Greeks were a highly sculptured people, and without them we wouldn't
have history. The Greeks also had myths. A myth is a female
moth.

Socrates was a famous Greek teacher who went around giving people advice. They killed him. Socrates died from an overdose of wedlock.  After his death, his career suffered a dramatic decline.

It was an age of great inventions and discoveries. Gutenberg invented removable type and the Bible.  Another important
invention was the circulation of blood. Sir Walter Raleigh is a historical figure because he invented cigarettes and started smoking.  And Sir Francis Drake circumcised the world with a 100 foot clipper.

Joan of Arc was burnt to a steak and was canonized by Bernard Shaw for reasons I don't really understand. The English and French still have problems.

Historians are like deaf people who go on answering questions that no one
has asked them.  Leo Tolstoy

History is the short trudge from Adam to atom.  Leonard Louis Levinson

Exam Question: 'Give an account of the future of vehicle
emissions'

Answer: "In future all cars will be fitted with Catholic
converters".

A politics student at Brunel remarked that the United States had the most
advanced military in the world possessing - "highly developed and powerful
marital equipment".

In answer to a question about the British electoral system, a student at
the University of London, considered "first parcel post", a worthy system.

A biology student wrote in genetics paper not about genomes but about the
"science of gnomes".

A student of English writing about a French poem noted that, "all of the
sentences end in a coma".

Q: Explain one of the processes by which water can be made safe to drink.
A: Flirtation makes water safe to drink because it removes large pollutants like
grit, sand, dead sheep and canoeists.

Q: How is dew formed?
A: Certain areas of the dessert are cultivated by irritation.  Then the sun shines down on the leaves and makes them perspire.

Q: What is a planet?
A: A body of earth surrounded by sky.

Q: What causes
the tides in the oceans?
A: The tides are a fight between the Earth and the Moon. All water tends to flow towards the moon, because there is no water on the moon, and nature abhors a vacuum. I forget where
the sun joins in the fight.

Teacher's
Tale of a Schoolboy Howler:

Teacher: 'What on earth do you mean?'
Jimmy: 'Well, it says here in the history book, 'Henry
VIII, having disposed of Catherine of Aragon, pressed his suit with Anne Boleyn.' 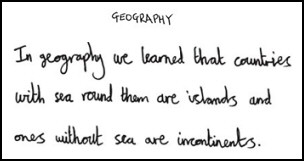 If there is one group who appreciates a good schoolboy howler more than
fellow pupils, it is the teachers.  While *Malapropisms (funny wrong
word) are good value, Spoonerisms are particularly prized where the writer
switches letters to make an unintentionally humorous phrase, for example:
instead of 'well-oiled bicycle' the pupil writes, 'well-boiled icicle'.

*Classic example: Joe made a carnal sin (cardinal).  Incidentally,
this could also be a Freudian slip.

Now that you have been alerted, see if you can spot Malapropisms, Spoonerisms
or Freudian slips in the following schoolboy howlers.

In midevil times most people were alliterate. The greatest writer of the futile ages was Chaucer, who wrote many poems
and verses and also wrote literature.

The greatest writer of the Renaissance was William Shakespeare. He was born in the year 1564, supposedly on his birthday. He never made much money and is famous only
because of his plays. He wrote tragedies, comedies, and hysterectomies, all in Islamic pentameter. Romeo and Juliet are an example of a heroic couplet.

Writing at the same time as Shakespeare was Miguel
Cervantes. He wrote Donkey Hote. The next great author was John Milton. Milton wrote Paradise Lost. Then his wife died and he wrote Paradise Regained.

Julius Caesar extinguished himself on the battlefields
of Gaul. The Ids of March murdered him because they thought he was going to be made king. Dying, he gasped out: 'Tee hee, Brutus'

The Bible is full of
interesting caricatures. In the first book of the Bible, Guinessis, Adam and Eve were created from an apple tree. One of their children, Cain, asked 'Am I my brother's
son?'

When Mary heard she was the mother of Jesus, she sang the 'Magna Carta'.

One of the oppossums was St. Matthew who was also a taximan.

Christians have only one spouse. This is called monotony.

Moses led the Hebrew slaves to the Red Sea, where they made unleavened bread which is bread made without any ingredients. Moses went up on Mount Cyanide to get the ten
commandments. He died before he ever reached Canada.

In my maths class I told the kids that we were going to investigate Even
and Odd.  One boy blurted out, 'I know that Bible story!'  When I
stopped laughing I said, 'I think you mean Adam and Eve.'

Gravity was invented by Isaac Walton. It is chiefly noticeable in the autumn.

Louis Pasteur discovered a cure for rabbis. But I don't know why.

Charles
Darwin was a naturalist who wrote the Organ of the Species.

Madman Curie discovered radio. And Karl Marx became one of the Marx brothers.

A parent said on Open Evening that she hoped her son, who was good at
science, would be a scientologist one day.

Johann Bach wrote a great many musical compositions and
had a large number of children. In between he practised on an old spinster which he kept up in his attic.

Beethoven wrote music even though he was deaf. He was so deaf he wrote loud music. He took long
walks in the forest even when everyone was calling for him. Beethoven expired in 1827 and later died for this.

(PS I had to read that last word really carefully) 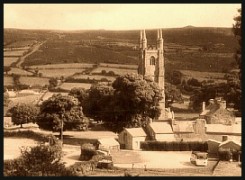 At degree level you were supposed to be able to put together logical arguments backed up by facts.  My flat mates and I made a pact that if we did not know a reference we would make up a source: Cobbley
T. Et Al working out of the Widdecombe labs.  Our idea was twofold, if several of us quoted the same source, then lecturer might actually believe our imaginary reference was real.  Secondly, if you
bring a smile to the markers face you may get extra credit.